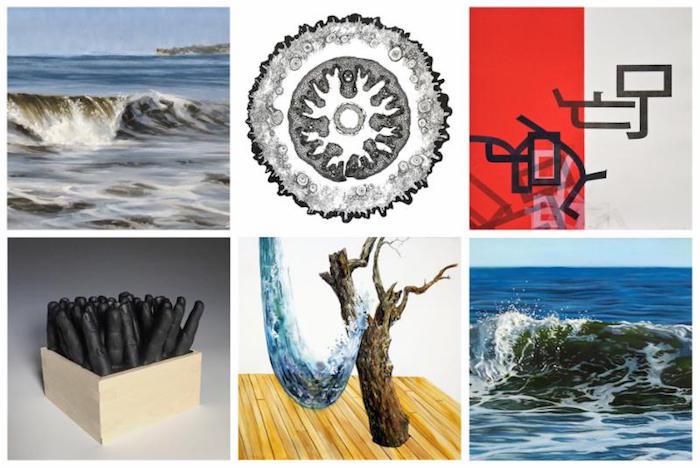 MENTORS AND MAKERS: The Artists of Westmont College, at Sullivan Goss Gallery.

As part of its continuing commitment to exhibit the work of talented emerging artists alongside important established and historically significant artists, Sullivan Goss Gallery hosts an exhibition of works by the art department faculty of Westmont College. Mentors and Makers: The Artists of Westmont College opens on Dec. 6 with a 1st Thursday Reception from 5-8 p.m. The exhibition remains on view through Jan. 20.

The art department at Westmont College has always had an outsized influence on the art scene of the region. But tucked away in its bucolic Montecito campus, it can be easy to overlook how much concentrated talent is found there. “Currently, Westmont’s arts faculty consists of some of the most intriguing, adventurous, and distinct artists working in and around Santa Barbara, though their work is making waves over a much larger area,” says Curator Nathan Vonk.

Scott Anderson received his M.F.A. in illustration from The University of Hartford, and an M.A. in illustration from Syracuse University. His illustration work has appeared in numerous publications, including The Wall Street Journal, LA Weekly, The Village Voice, Variety, The Hollywood Reporter, and many others. He has also created numerous book covers for the popular “Who Is” series from the Grosset & Dunlap division of Penguin Books. His work has been awarded and recognized by Communication Arts, American Illustration, the Society of Illustrators New York, the Society of Illustrators Los Angeles, and in multiple volumes of Spectrum. A gallery painter as well, Anderson exhibits his figurative work annually with Sullivan Goss Gallery. 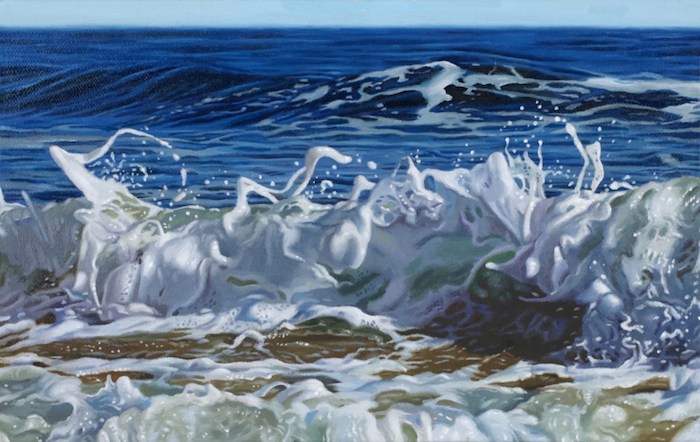 James Daly focuses on figurative work and classical methods in various genres. Most recently his art has been an exploration of movement, visual memory, and experience in the outdoors. Daly is a graduate of Westmont and UCSB with degrees in Studio art and a Masters in Education. For the last eleven years he has developed a classically based curriculum that follows atelier-style art education for Providence Upperschool and more recently joined Westmont as an adjunct instructor. 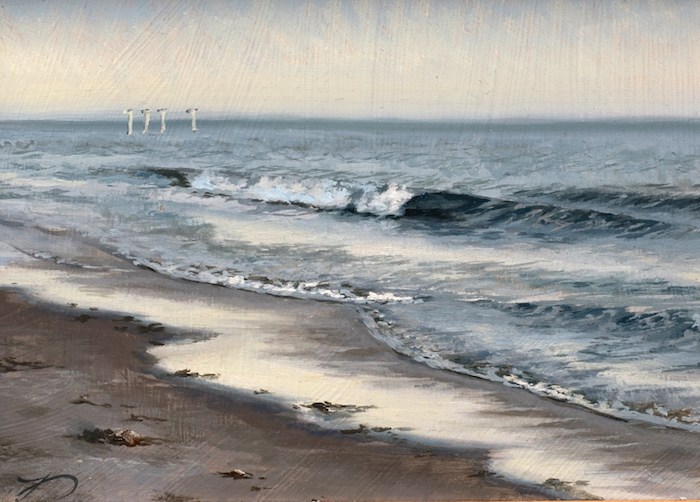 Sommer Roman was born and raised in California. She received her BA from UC Santa Cruz in 2004, and her MFA from UC Santa Barbara in 2014. She maintains a multi-disciplinary practice spanning sculpture, painting, and drawing and teaches part-time at California Polytechnic University (Cal Poly) & Westmont College in Santa Barbara. Some of her recent projects & exhibits include: Left Coast; Recent Acquisitions of Contemporary Art, a group exhibit at the Santa Barbara Museum of Art; Out of the Great Wide Open, a group exhibit at the Museum of Contemporary Art Santa Barbara; Artist Residency & culminating solo exhibition, Passage at UC Santa Barbara; Artist Residency at The Squire Foundation, and most recently, In the Woods, Perpetual Youth, a solo exhibit at Ventura College.

Chris Rupp received his BA from Westmont College and an MFA from Azusa Pacific University. While trained primarily as a sculptor, Rupp does not limit his art making to traditional sculptural mediums or even three-dimensional forms. From graphite drawings, to molded plastic, or the use of unconventional store bought materials. His work has been exhibited at the Inland Empire Museum of Art, Biola University, Westmont Ridley-Tree Museum of Art, San Luis Obispo Museum of Art, The Channing Peake Gallery, and the Santa Barbara Arts Fund. 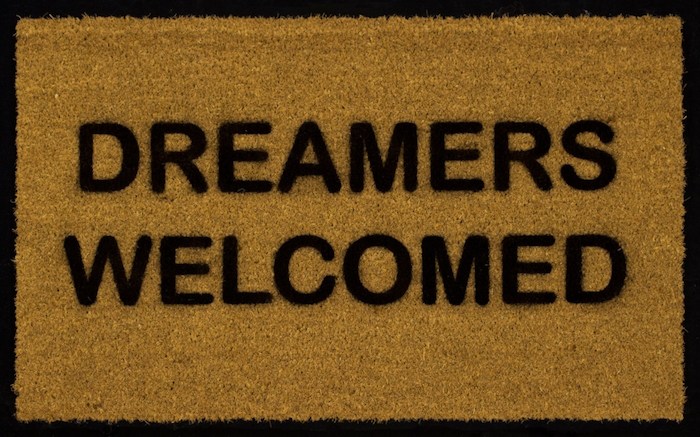 Meagan Sterling has an M.A. and an M.F.A. in Printmaking from the University of Wisconsin, Madison. Her work has been displayed in many juried and group exhibitions, from Denver and Peoria to Seattle and Spokane. She says, “The paradox of daily life as safe and comfortable, juxtaposed with its polar opposite—defense against life’s uncertainties—appears to bully the American Dream itself. My art explores images of post World War II Americana where energy and resources were often used to advance comfort and promise safety and well being.” 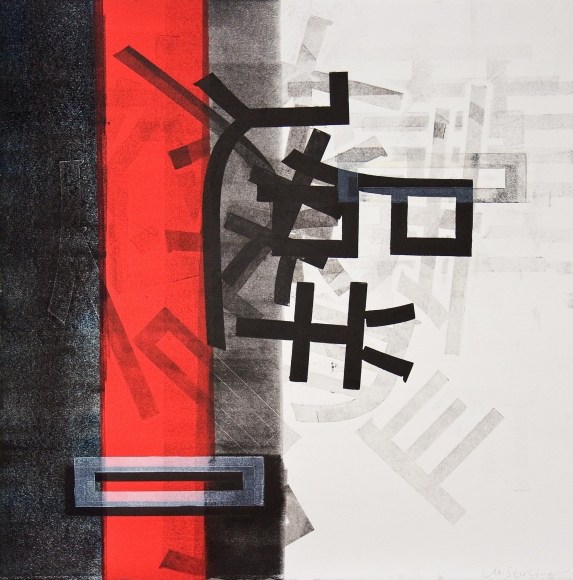 The gallery describes Brunner’s latest body of vibrant work as “connecting to the earth around us as it regenerates from a long lack of rain. Poppies explode, scattering their seeds to the wind for the next season of flowers. Roads lead through winding hills verdant with fresh grass. Clouds settle in to canyons to coat the hills with moisture. While her views are primarily imaginative, we are drawn to them by sense of memory for a place we have visited or more accurately, the familiarity of worlds we have wandered in our dreams. This remarkable group of paintings reminds us to take a collective breath. Spring is coming, bringing regeneration and a continuation of nature’s endless cycle.” 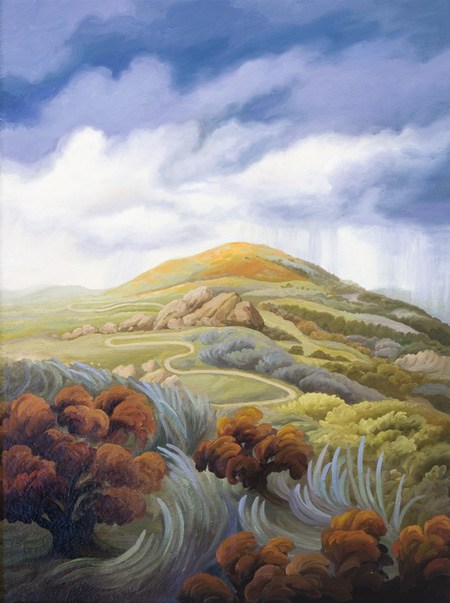 Brunner earned a BFA from UCSB and trained at Otis Art Institute, Chouinard Art Institute and the University of Guadalajara. She has been exhibiting in the Santa Barbara area for 40 years and brings a local’s knowledge of the terrain together with a visionary artist’s sense of interpretation.

The exhibition remains on view at Sullivan Goss Gallery, 11 E. Anapamu St., through June 3. For more information, visit www.sullivangoss.com or www.facebook.com/sullivan.goss or call 805/730-1460.

Dan Levin‘s solo art show, “Please Don’t Touch the Art” at Restaurant Roy (7 W. Carrillo St.)  will include a “one night only pop up store” during the reception on December 1, during 1st Thursday from 7-11 p.m. Levin’s Lonely Hearts altered playing card decks, shirts, candles and small assemblages will be available for sale on Thursday, in addition to a room full of larger works that will be up until the end of January.

Looking for something special for an art lover (or yourself)?  Sullivan Goss Gallery’s annual 100 Grand exhibition is the place to shop. Featuring 100 quality works of art for $1,000 or less, the exhibition has become well known as “an incubator of emerging talent, an entryway for beginning collectors, a holiday celebration in the art community, and an ever timely reminder that everyone’s life is improved by the addition of original works of art.”

The exhibition officially opens on 1st Thursday in December (12/3) and is one of the area’s must-attend events of the year. The 100 GRAND show features paintings, drawings, photographs, assemblage and sculpture by emerging and established artists. Contemporary Curator Susan Bush was able to secure work from many of last year’s best-selling artists, but there are also 17 new artists who have never before shown with Sullivan Goss.

It’s that time of the year again: the sixth annual 100 GRAND exhibition at Sullivan Goss.Featuring 100 quality works of art for $1,000 or less, the exhibition has become an incubator of emerging talent, an entryway for beginning collectors and a holiday celebration in the art community.

Last year, almost a thousand people attended over the course of the evening.  December’s 1st Thursday at Sullivan Goss has become one of the area’s must-attend events of the year- a chance for artists and collectors to get together, network, and celebrate the accomplishments of another year in art.

The exhibition runs from December 4 to February 1, 2015, and features paintings, drawings, photographs, assemblage and sculpture by emerging and established artists that are priced to sell and sized (for the most part) to fit into smaller spaces.  For this year’s exhibition, Contemporary Curator Susan Bush was able to secure work from many of last year’s best-selling artists, but there are also more than 20 new artists who have never before shown with Sullivan Goss.

Since its first come first serve, buyers are encouraged to arrive early and to act fast.

The opening artist reception is 1st Thursday, December 4 from 5 – 8 p.m. at Sullivan Goss Gallery, 7 E. Anapamu St. in downtown Santa Barbara. To see a video about the exhibition click here. 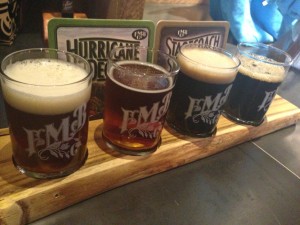 It used to be that the fun was just getting started when 1st Thursday ended…but not anymore! Lobero Theatre, The Granada and The New Victoria Theatre have teamed up for a terrific new production: Historic Theatre District’s 1st Thursday: After Hours from 7:30–9:30 p.m., where you can enjoy your cocktails with culture every 1st Thursday.

Premiering on Thursday, December 5,  1st Thursday: After Hours  is a fun FREE event featuring entertainment by magician Mark Collier, bites from Sojourner Café, and beer tasting by Figueroa Mountain Brewery. This first one will be on the historic (newly reopened) Lobero Esplanade in front of the Lobero Theatre, 33 E. Canon Perdido St.

In addition, the party also features a no-host bar and additional live entertainment.

Hosted at a different theater each month, the 1st Thursday After Hours will feature sips and bites from one of the Theatre District’s restaurant partners and live local entertainment.

“This creative partnership between the three theaters is a great example of cultural organizations coming together to increase access to the arts and expand their audiences, while engaging the community,” says Ginny Brush, executive director of the Santa Barbara County Arts Commission. “1st Thursday has become an immensely popular tradition for local Santa Barbara arts and culture enthusiasts, igniting the Cultural Arts District after 5 p.m. With the addition of ‘After Hours’ at the theaters, that energy can continue!”
The schedule of 1st Thursday: After Hours through the Spring is:
·       December 5, 2013 at the Lobero Theatre
·       Skipping January due to holidays
·       February 6 at The Granada Theatre
·       March 6 at the New Vic
·       April 3 at the Lobero Theatre
·       May 1 at The Granada Theatre
·       June 5 at the New Vic