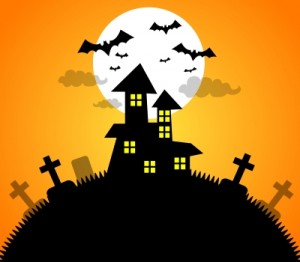 While the holiday has always been an opportunity to let loose and have a bit of fun, there’s a lot more to acquire on Halloween than adorable bite-sized candy bars. That $6.9 billion in spending is up from $5.8 billion a year ago, which is scary good news for retailers.

The BigResearch survey found that the average person plans to spend $72.31 on the holiday, with spending on costumes alone expected to exceed $2.5 billion, spending on candy to reach $2 billion, and $1.88 billion for decorations.

Why are we so enamored with inflatable skeletons, candy corn, and fake cobwebs? I’ve got a few theories:

Halloween is the naughty little sister of Christmas.

There are parties and candy associated with both, but little sis (Halloween) is a lot looser than big sis (Christmas). She doesn’t feel that same sense of tradition and responsibility. She just wants to have fun. Instead of mistletoe, which must be grown or purchased, little sis (Halloween) has cobwebs, which you can find for free at my house. Big sis (Christmas) takes herself so seriously, with all that ritual stuff about keeping traditions alive, not to mention the cooking, the tipping, the shopping, the wrapping, the cards. … No wonder she gets migraines.

Halloween is the new Christmas.

It comes earlier, lasts longer, and gets more expensive every year. While the boatloads of mini Snickers and paper pumpkin decorations that adorn store aisles just minutes after the Valentine’s Day conversation hearts and cupids are put on clearance pale in comparison to the plethora of dancing Santas, candy canes and fake snow, that’s only because my Christmas shopping theory of “one for you, one for me” is finally catching on. Otherwise, Halloween would be winning the consumer consumption race by now since the only “green” thing about it is the glow-in-the- dark goblins. Just think about how many of your Halloween purchases are edible (Reese’s peanut butter cups must be consumed within a week or they will haunt you), potentially delinquent (pumpkins will either end up as roadkill or as a landscape accoutrement to toilet paper), or non-repeatable (like that Sarah Palin costume from 2008).

The Grinch stole Christmas, but the adults stole Halloween.

Increasingly, adults have been elbowing children out of the way to claim Halloween as their own. After all, what’s not to like about a holiday where you can dress up in an esoteric costume and pat yourself on the back for being smarter than other people when you continually have to explain what you are. Or a holiday where you can knock on someone’s door while wearing a mask and don’t have to worry about them calling the cops, or better yet you can eat mini candy bars and fantasize that you’ve become a giant.

Halloween is the baggage-less Christmas.

Originally published in the Santa Barbara Daily Sound on October 28, 2011.

Only if you add sugar.

I have no doubt that having kids makes your heart fuller and your wallet slimmer, but what about your waistline? According to a study by the University of Iowa College of Medicine and the University of Michigan, living with the little darlings also makes your belly bulge. And I’m not talking about pregnancy pudge here. Nor am I referring to all of that “drinking for two” that most fathers-to-be indulge in.

Nope, an examination of the nutritional cost of parenting found that simply living with children boosts your fat intake by almost five grams a day.

Could this mean that those last few bites of macaroni and cheese, pizza crusts and Girl Scout cookie crumbs actually count as calories? Even if you eat them standing up? What if you don’t want to carry the rest of the soccer snacks all the way back to the car? Or what if you bought the extra box of candy for a good cause? Those calories couldn’t possibly make you fat.

As caring and health-conscious parents, my husband and I do our best to intervene with the Halloween candy, Christmas cookies, gingerbread houses, Hanukah gelt, chocolate Easter bunnies and infinite supply of birthday goodie bags. Was it possible that this conscientious parenting was making us fat?

Before I got too stressed out about all this (and began foraging through the leftover birthday goodie bags for chocolate), I went to the most reliable and accurate source of health information available, Google. What do you know, not only does having kids make you fat, so do a lot of other things.

Their remaining top ten list: 1. Inadequate sleep (there is definitely a connection to having children there). 2. Endocrine disruptors — substances in some foods that may alter fats in the body (I knew all that celery would end up biting me in the butt). 3. Pleasant temperatures — air conditioning and heating limit calories burned from sweating and shivering. 4. Fewer smokers — less appetite suppression. Also, dying makes you very skinny. 5. Medicines that cause weight gain. 6. Population changes — more middle-aged people in the population, who have higher obesity rates. 7. Older mothers — they tend to have heavier children (because they can’t hear Junior when he asks for that fourth cookie). 8. Genetic influences during pregnancy. 9. Darwinian natural selection — fat people living longer. 10. “Assortative” mating — overweight people procreating with others of the same body type, gradually skewing the population toward the heavy end (and providing a boon for the wedding registry business by providing the “supersize” option for china, bedding, towels and lingerie).

“Take out all the elevators in buildings and people would be more fit,” urges a British architect. Even making stairways easier to find will help encourage fitness. And putting houses closer to shops, restaurants and workplaces will encourage people to walk or ride bikes. That’s right, that suburban ranch house that you bought once you had kids…it’s making you fat.

To counteract this phenomenon, I hear that an aerobics tycoon in Dallas is developing a 51-acre community that will be geared around a comprehensive wellness program.

Homeowners will pay a premium to build their own homes alongside a personal trainer, in 300 hour-long sessions. Only a limited number of cars will be allowed in the complex because guess what–you know what else makes you fat–cars. According to a study of Atlanta residents, there is a correlation between driving and weight gain. Each additional hour spent in a car per day is associated with a 6% increase in the likelihood of obesity. You know where moms spend most of their lives? Cars.

All of which leads me to the obvious conclusion that the witch in Hansel and Gretel must be thin because she built her own house, drives a broom, and eats kids instead of living with them. Hmmm…could this be the new Atkins Diet?