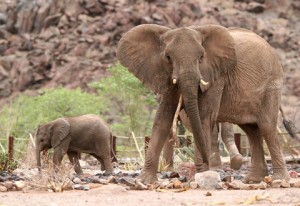 My first introduction to my future in-laws came via a giant UPS package full of t-shirts and fake poop.

They were living on a boat in Maryland at the time and weren’t able to make it home to Santa Barbara for Christmas. But believe me, they were there in spirit and found a way to make their presence felt.

“Ooh, a gift for me,” I exclaimed, as I opened the package to reveal a t-shirt with a ginormous elephant head on the front, and an even larger elephant bottom on the back. Hmmm. Were they trying to tell me I needed to develop a thicker skin to be a part of their family?

They’d never met me before, so maybe they hadn’t been given an accurate scouting report about my um, fashion sensibilities. Or maybe it was supposed to symbolize something. Aren’t elephants considered lucky in some cultures? Could be. But still, an elephant t-shirt? I know that shopping opportunities are limited when you live on the high seas, but what about a nice abalone shell?

As I catalogued the possible meanings of the gift, I noticed something odd: everyone in my boyfriend’s family got the same t-shirt. Huh.

“This is so dad,” mused Big Brother Bruce.

“Here are the instructions,” said Big Sister Julie, as we herded around to listen. I have since learned that elephants live in a very structured social order. “Number one: Put on t-shirts.” I giggled nervously as I watched every single other person in the room put on their ridiculous shirt without a moment’s hesitation.

Was there an elephant in the room that was forcing them to do this? Their parents were miles away. Why were they all following instructions?

“C’mon, Leslie, you’re one of us now,” urged Little Sister Holly. The social circle of the female elephant does not end with the small family unit. She may as well have been telling me to drink the Kool-Aid.

I have since learned that the female elephant’s life also involves interaction with other families, clans, and subpopulations, such as potential sister-in-laws. I gritted my teeth and put the t-shirt on over the cute new outfit I had spent days agonizing over and would eventually spend half a paycheck paying for.

My protest, “but I haven’t finished my wine,” was met by a flash of a flask from Brother-in-law Eric. “Don’t worry, we’ve got it covered,” he reassured me.

Minutes later we were at the mall, as instructed, opening the mystery package. It contained a disposable camera and what I first thought were a bunch of coconuts. Wouldn’t that have been nice? Expensive to ship, but in the range of normal.

No such luck. They turned out to be brown plastic elephant droppings, inscribed with each of our names.

I’ve heard about stock being used as a dowry, or even livestock, but my future in-laws had sent me plastic poop. That couldn’t be a good sign.

“Find someone to take your picture,” read Julie. This wasn’t an easy task, since people aren’t exactly swarming the mall on Christmas Day. All the stores are closed. We managed to flag down a disheveled looking woman who was pounding and screaming at the window of Pottery Barn in an attempt to buy one last perfect sandalwood candle.

I felt like screaming myself. Why couldn’t they have given me a nice candle for Christmas? Or even a book of matches. My reverie was interrupted by Julie’s reading of the order for us to gather in a straight line.

Now I know that elephants communicate over long distances by producing and receiving low-frequency sound, which can travel through the ground farther than sound travels through the air, but the idea that my future father-in-law was choreographing this scene all the way from Maryland still stuns me.

Apparently the long distance sound waves can be felt by the sensitive skin of an elephant’s feet and trunk, which pick up the resonant vibrations. No wonder I felt like pounding my head and stomping my feet. Even the crazy Pottery Barn lady thought we were nuts when Julie read the final instruction to “line up in order of age. Then, one-two-three drop your poops.”

The camera clicked as, one by one, we dropped poop. I’ve never felt so ridiculous in my life. I’ve also never laughed so hard.

In a very, very, very odd way, I knew I had just passed through some sort of strange family initiation.

Ah, the foibles of families. I knew them well. Female elephants spend their entire lives in tightly knit family groups, which my own tribe had prepared me well for.

But male elephants are different. As they get older, they begin to spend more time at the edge of the herd, gradually going off on their own for hours or days at a time. Eventually, days become weeks, and finally the mature male elephant sets out from his natal group for good, as my father-in-law did when he passed away this week.

But I know he’s still with us in many, many ways. We’re elephants, and elephants never forget.

Originally appeared in the Santa Barbara Daily Sound on September 28, 2007. 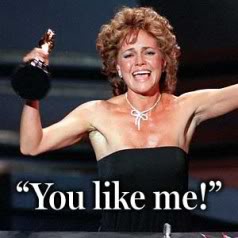 What is it with Sally Field and award show speeches?

Her dorky “you like me, you really like me” gushing from the Academy Awards Show 22 years ago, still ranks as one of the all-time-most-memorable Oscar speeches.

And at Sunday night’s Emmys, she did it again.

OK, so she could have used a better script. And sure, she got flustered, lost her place, and babbled her lines. But somehow Sally Field still managed to deliver the best momologue I’ve heard at an awards show since, well, her Best Actress win back in 1987.

Bleep the delivery, thanks to the Bleeping Fox network, her censored sentiment–“if the mothers ruled the world, there would be no g–damn wars in the first place”–certainly got my attention. There are surely more articulate ways to speak out against the Bleeping war or praise the nonviolent instincts of women, but that’s beside the point.

Thanks to the Bleeping Bleeps at Fox, Gidget–whom a number of web surfers apparently thought rode her way into the sunset 20 years ago–cowabunga-ed her way into a gigantic wave of media attention.

Instead of being just another Hollywood headliner, seizing her 15 forgettable seconds on the soap box, the Flying Nun’s momologue actually inspired some dialogue and debate about war, God, freedom of speech and censorship.

Who knew that a silly Bleeping awards show could end up being so thought provoking?

I have no problem–obviously–with someone using their minute in the spotlight to voice their own personal views.

At least Sally Field tried to do something constructive with her few moments in the spotlight.

Not surprisingly, some people had a field day mocking the idea that putting a woman in charge might actually lead to more peaceful solutions, using examples like Indira Gandhi, Golda Meir, and Margaret Thatcher as mothers who went to war.

I think that’s a load of Bleep.

Nothing makes you value human life more than giving birth to a 15-pound baby with a 21-inch-wide head–unless of course you do it without an epidural, in which case you’d happily start bombing Canada just to distract yourself.

In 1870, long before Hallmark even existed, Julia Ward Howe dreamed up Mother’s Day, intending it to be a Mother’s Day for Peace. After nursing the wounded during the American Civil War, she gave a Bleep of a momologue, declaring:

“Arise all women who have hearts, say firmly: Our sons shall not be taken from us to unlearn all that we have been able to teach them of charity, mercy and patience. We women of one country will be too tender of those of another country to allow our sons to be trained to injure theirs. In the name of womanhood and of humanity; take counsel with each other as the means whereby the great human family can live in peace.”

Peace is as patriotic as mom’s apple pie. And so is talking about whatever the Bleep you want to on award shows or anywhere else.

So here’s to bleeping Sally Field. I, for one, really do like her.

Tell us what you think about Sally’s speech, or Leslie’s column for that matter, by emailing email.

Originally appeared in the Santa Barbara Daily Sound on September 21, 2007.

Ahoy mates. As we sail out onto the high seas of life, we take our pleasures where we may. I, for one, ‘ave been shivering me timbers for months in anticipation of my favorite holiday. That’s right, next Wednesday, September 19, is International Talk Like a Pirate Day.

Rather than yield this blarney beauty to the Wednesday columnists, I decided to polish my pirate patina now, so I’d be extra, extra prepared to talk like a pirate next week.

6 Bells: My scallywag of an alarm goes off. Time for me dilemma of the morn, do I hit t’ snooze button or hit t’ gym? T’ hook I attached t’ me port arm while gettin’ into character last night accidentally taps t’ snooze. Aye! Problem solved.

7 Bells: Five snoozes later I finally roll out o’ bed and try on a few outfits. “That’s some pirate booty all right,” says me mate, so I discard a tight pair of britches and go for the serving wench look instead. “How’d you like to scrape the barnacles off of me rudder?” greets me this time. I’d better try again.

8 Bells: Drive me lad t’ school, a wee red convertible comes ou’ o’ nowhere t’ steal me favorite parkin’ spot at Vieja Valley. Arrrr! (Note t’ self: does it sound more pirate-like to say “Arrr,” “Aurgh,” or “Arrrrrrrrrrrgg…?” I wish I could text Peter Skarsgaard an’ ask th’ lad’s advice on how not to get hornswaggled.)

9 Bells: Interview the director o’ a local nonprofit. She doesn’t even crack a smile when I ask her if I can have a peek in her treasure chest. Aurgh!

1 Bells p.m.: A glance at me calendar reminds me that t’ lad has a bucko comin’ over after school. I smartly make t’ beds and do t’ breakfast dishes, though I know th’ sprogs will destroy everythin’ in sight within minutes.

2 Bells p.m.: I pick up me son and his bucko at school and get sweet-talked into takin’ them for ice cream. Beware t’ evils o’ chocolate chips, I warn. They listen t’ t’ wise old pirate lady and order cookie dough instead.

3 Bells p.m.: The wee bilge rats are so wired from the sugar rush that they destroy my garden. Arrr. I’d like to make them walk the plank, but instead I give the wee scallywags a timeout in the bung hole.

6 Bells p.m.: Shiver me timbers, will you look at that thar beauty! I exclaim as me swashbuckling hero comes with a big bottle of rum and me favorite dishes, Salt Cod and Rice (heavy on the salt cod), Rice and Salt Cod (light on the rice), and Salt Cod Medley (salt cod combined with chunks of salt cod). That’s my buccaneer. It’s a pirate’s life for me indeed. Argh!

When she’s not talking like a pirate or walking like an Egyptian, Leslie can be reached at email For more columns visit www.LeslieDinaberg.com.

Originally appeared in the Santa Barbara Daily Sound on September 14, 2007.