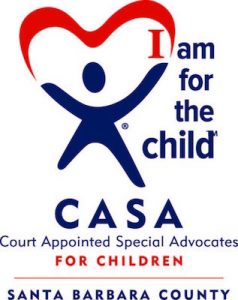 “When I started I expected nothing for myself,” said Doris Becker, recalling her ten years as a volunteer CASA (Court Appointed Special Advocate), working on behalf of children who are involved in the court system. The program was just starting out in Santa Barbara County when she saw a newspaper ad about the training classes.

“I thought, I love children and I want to volunteer. At the time I didn’t know what the program was. I just really wanted to help.”

Not only has she helped by devoting countless hours to advocating on behalf of her young charges, about four years ago she also got her husband Don into the act.

Don, who also serves on the Board of Directors of Hillside House, said he got involved for two reasons. “It was a good project, but there’s a confidentiality issue and she would come home and want to talk (about her cases).”

As a pharmacist (now retired), Don was used to dealing with confidentiality issues, and decided to become a CASA to help support his wife in her work. While the work is certainly rewarding, both of the Beckers admitted that it can also be emotionally grueling.

“The emotional ups and downs have caused me sleepless nights, so you have to love children,” said Doris. “And you do question yourself; especially if Social Services and you are not pulling in the same direction. Then you go, do I really know what is best for the child?”

You wonder, what do they see that I don’t see, said Don. “There’s some self doubt in there.”

“And then when the judge goes with your recommendation you come out and you should be very excited and you go oh my God, I’m now responsible for what is happening to this little guy, so it is emotional and yeah, you have to really see if you can be totally unbiased, can you really look at it objectively, you know,” said Doris.

Unlike social workers who have enormous case loads and generally try when possible to keep families together, CASAs make their recommendations strictly based on their view of what is best for the child. They evaluate the situation at school when applicable, and at the child’s home, which is often a foster care situation. They also make sure that the children are taken to the doctor for regular checkups.

While situations and needs vary with each case, the Beckers said they try to see their current charge (a little girl) at least once a week.

“If it is a good situation you might not even see the child every week,” she said, recalling one of her cases, two elementary school age boys who were brothers. “They were so involved in school and other activities that we would have not done any good, we would have been interfering. We would have been disruptive rather than be helpful.”

In the case of another child whose mother had drug problems and was frequently homeless, “I would sometimes see him four or five times a week because he was, at one point, so, so needy — he would be alone. His mom was put away and his sister was moved, so the only person he knew was me,” said Doris.

The children aren’t allowed to come to the volunteers’ homes, so sometimes planning activities can be challenging. CASAs meet regularly with their caseworkers and fellow CASAs who are working with children in the same age group, and often exchange ideas for activities.

Free bowling at Zodo’s in the summer was a big one, as are the various free days at local museums and attractions.

“We have one car that’s our CASA car,” said Don. It’s full of skateboards, kneepads, scooters, helmets, beach toys and more. The Becker’s son, now grown and living in New York City with a family of his own, even gets into the act, sending boxes of books, games, toys and goodies for the children his parents look out for.

One of the most frequently asked questions about the CASA program, is, “Where do you find the time?”

“That always comes up,” said Don. “You find the time, you make yourself find the time.”_”And I’m just amazed how much pleasure we are also getting out of this,” said Doris.

For more information about volunteering to be a Court Appointed Special Advocate, call 879.1735, E-mail info@sbcasa.org or visit www.sbcasa.org.

Originally published in the Goleta Valley Voice in October, 2005. 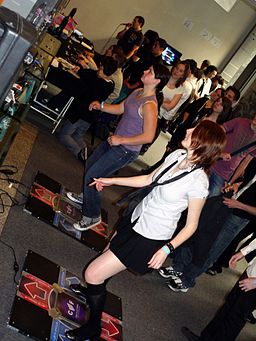 Watching kids of all ages “shake their moneymakers” to the tunes of the Dance Revolution games in the arcade at Luigi’s Restaurant or the lobby of Camino Real Marketplace Theatre may be amusing to some, but it’s serious business to Dr. Debra Lieberman, a lecturer in the Department of Communication and a researcher in the Institute for Social, Behavioral, and Economic Research (ISBER) at UCSB.

“The way we learn from interactive media is phenomenal. … There’s really been an upsurge in interest in games as a learning platform in the last several years,” said Lieberman, who’s been involved in the development and study of “serious games” or “games for health” since the 1980s.

Lieberman has the data to back up her claim.

As Vice President of Research at Click Health, one of her projects was a diabetes game for children. Prior to playing the game, participants were averaging about two and a half urgent care or emergency visits to the doctor related to diabetes per year. “At the end of that period they were averaging one-half a visit per child per year, so they decreased their urgent care needs by 77 percent,” Lieberman said.

Self-esteem can be gained through game play, she explained. “With diabetes and asthma there’s a tremendous stigma attached to having that condition and taking care of yourself. Like using your inhaler before a baseball game or saying no to ice cream sundaes when all the kids are having them. So the game really actually has characters who have the condition that are cool and it sets a new norm – that it’s okay to take care of yourself and in fact it’s a good thing.”

Self-efficacy can also be taught, Lieberman said. “With diabetes it worked beautifully because we had four simulated days . . . and you had to pick foods . . . Your characters’ blood glucose level would stay in the normal range if you fed them well and took their insulin… and the algorithm would result in too high or too low blood sugar or OK and you had to live with that and deal with that and it even affected how well you played the game.”

Games can also help teach knowledge and skills. “A game usually has you rehearse skills maybe hundreds of thousands of times, as you play the game again and again. You refine them and you immediately see the effects of those actions,” said Lieberman.

As the parent to 14-year-old Eliot Chaffee, a freshman at San Marcos, Lieberman is no stranger to adult criticisms of video games. But contrary to complaints about games being anti-social, she views them as offering a pathway toward communication.

“Games are a very social activity. If you play a game alone you are probably going to talk about the game with other people when you get a chance, but more often than not, kids are playing with others . . . So, it’s used as a bridge with friends, to say play this game with me and let me tell you about diabetes.”

Her research found that children playing the game talked to their parents about diabetes more too.

In response to those who criticize games as method of learning, Lieberman said, “Nobody feels it’s a waste of time for a child to be looking at a page, why is the screen suddenly evil? If anything a screen, you can control what you see more, it is animated and it gives you feedback and it gives you challenges.”

She did a study that asked children if they would prefer to learn information through a book, videotape or a video game. More than 95 percent of the kids chose a video game. And it wasn’t just that they were more fun, Lieberman said, they also understood the importance of interactivity. “A video game will tell you if you’re wrong so you can learn. … 6-year-olds understood that a video game gives you that feedback and it’s a way to really learn and to get better and to practice.

“Some people call games for health or serious games stealth learning or sugar coated learning and I say, no, it’s not hidden. And in fact, learning is fun and I don’t think you need to be ashamed that your game is about learning and it has to be a fun game. You know. If it’s not fun then that’s the end of it,” Lieberman said.

Originally published in the Goleta Valley Voice on October 7, 2005.