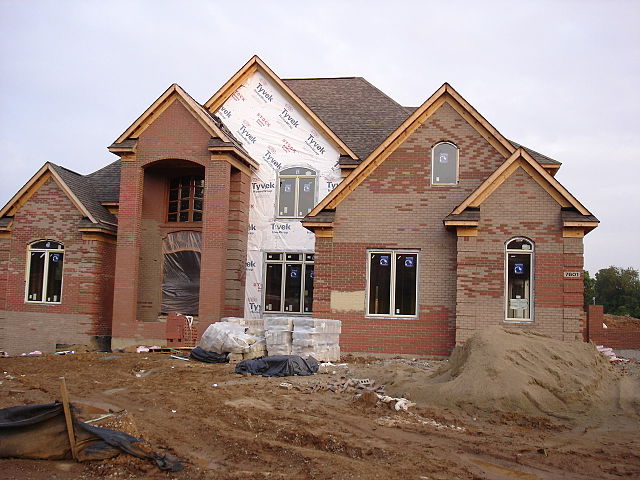 A “McMansion” being built in Louisville, Kentucky. From https://flickr.com/photos/merfam/174212265/ courtesy Wikipedia Commons.

Robert Frost’s well-known line from “Mending Wall,” written about his 1913 England neighborhood, still holds up in 21st century Santa Barbara, where the City Council approved a plan on Tuesday to almost triple the size of an 806-square-foot home on the Mesa, thrilling one family and devastating another.

Although the debate centered around Hans and Ginny Miller’s request to remodel their home at 221 San Clemente Drive, at the core of the discussion was a larger community dilemma that both neighbors and city leaders are struggling with — mansionization or expansionization of once modest tract homes.

Often selling for over $1 million, one-bathroom houses built in the 1950s are being converted into two-story contemporary homes with multiple bedrooms and baths. Some see this type of change as inevitable. “It’s a natural occurrence that people who can now afford lots on the Mesa want bigger homes,” said Arlie Skov, who lives on Shoreline Drive.

Other neighbors spoke of buying their small homes with the intention of growing their houses. “Families need room to grow,” that Roger Moore, a neighbor who spoke in support of the project.

While one of the arguments against second story expansions is the infringement on neighbors’ privacy, Jennifer Moore spoke of the charms of close proximity. “My neighbor to the right has a two-story house that looks down into our backyard. She comments on how quickly our puppy is growing. Children of other neighbors ride bikes and trikes up and down our sidewalk, none of this infringes on our privacy. This defines the neighborhood.”

However, not everyone supports the changes. While the Miller’s next-door neighbors, Jason and Sarah Dodds, brought the appeal to the Council, they had the support of several neighbors and neighborhood groups.

“As difficult as it is for the Millers, it’s equally difficult for those of us trying to preserve our Santa Barbara lifestyle,” said Eric Schott, a neighbor and one of the members of the Marine Terrace Preservation Group, which is working to “stop the mansionization of the Mesa.”

The Allied Neighborhood Association, which represents a consortium of neighborhood groups from all over the city, was also against the project. The board of directors sent a letter to the city stating, “If the proposed project is constructed, it could establish a bad precedent for Marine Terrace that would result in further adverse impacts. … The proposed project would destroy the intactness and integrity of San Clemente Drive.”

Ultimately the majority of the City Council supported the project because of the extensive review process — which started in March 2003 — rather than the merits of the design itself.

“The applicants have been through too much,” said Councilman Brian Barnwell. “I support denying of the appeal but recognize the merits.”

Councilman Dr. Dan Secord agreed, saying at this point it would be inappropriate to ask the homeowners to do anything more because they had worked through the city process.

“This project kind of reminds me of the kid who got passed through school year after year, and, the next thing you know, he’s 18 and can’t read,” said Dr. Secord. Still, he was comfortable with it. “This is not a mansion.”

With Mayor Marty Blum absent, Councilman Das Williams cast the lone dissent, urging his colleagues to look at the bigger picture and the social costs of changing the character of the Mesa from working class to middle and upper class houses.

Once pigeonholed as “slackers,” members of Generation X are now in their mid-20s to mid-30s and having a significant impact on home buying and building trends. Although the high cost of housing on the South Coast makes it difficult for Gen Xers to break into the market, when they are able to buy — through IPO bonuses, good old fashioned savings, 100 percent financing, or help from mom and dad — they want different things than their parents did.

Quality is important. “They are happier with one good thing rather than three average things,” said Greg Nester, owner of Greg Nester Construction & Development and president of the Home Builders Association of the Central Coast.

Their dream house might be smaller than their parents’ house, but not necessarily less expensive.

“They want the best product they can get for the money they spend,” he said.

It’s all about value. This is a generation that has seen dot bombs and the stock market roller coaster. That uncertainty leads to more cautious spending.

“We started to think that maybe we don’t want something that’s too nice to have something that we can kind of fix up and make our own,” said the new Goleta homeowner.

Homes should fit their lifestyles. “Gen X are goers, they’re not sitting at home,” Nester said. “They come home in the evening and would prefer to have less of a burden as far as maintenance goes.” For example, they don’t’ want elaborate kitchens because they say they don’t cook that often, he said.

And when they are entertaining on the South Coast, it’s more often in the backyard than in a formal dining room.

“We want to have people come over and have barbeques,” Rocque said.

They’re also not afraid to embrace new styles like concrete countertops instead of traditional tile. Stained and glazed concrete floors are becoming more common as well as more modern plumbing fixtures. Xers like to be able to customize their living spaces, said Nester.

They’re not running to the ‘burbs. “Many Xers prefer inner city living. … They are purchasing properties that may have mixed use with retail below and a condo above for residential,” said Nester.

Being just blocks away from La Cumbre Plaza and Upper State Street stores is part of what made her new condominium in San Roque appealing to Cari Thomas. “Being able to walk places in the neighborhood is great,” she said

Once you’ve had your fill of fireworks this Fourth of July weekend, what better time to enjoy another one of America’s favorite traditions: the movies. While Hollywood has a long history of paying tribute to the nation’s glory, my personal list of feel-good favorites is about a lot more than just war and politics. Here is a completely subjective list of movies to get your patriotic juices flowing:

Baseball, the great American pastime, has inspired some fabulous films. I dare you not to get teary watching Field of Dreams, not to laugh out loud watching Bull Durham (written and directed by Santa Barbara son Ron Shelton) and not to feel inspired by A League of Their Own.

Baseball isn’t the only sport to inspire great movies. Until someone makes a movie about Bruin football, Notre Dame-set Rudy will certainly tug at your heartstrings. Almost a decade before joining the starting lineup in the Lord of the Rings trilogy, Sean Astin brought great spirit and drive to the role of Rudy, another vertically challenged hero.

I would also put Rocky in the major league of great sports films. Sylvester Stallone has never been more compelling than he was in this classic underdog story. A more recent contender is last summer’s Seabiscuit. I never imagined I could be so enthralled by a movie (or a book) about horseracing, but Seabiscuit is really a wonderful snapshot of American history.

Another favorite piece of U.S. history in the movies is Apollo 13. I also loved The Last of the Mohicans, though I’ll readily admit it had more to do with Daniel Day Lewis than the story itself.

In the political arena, there’s no better film than Mr. Smith Goes to Washington. In fact, for warm and fuzzy feelings about America’s ability to make great films, it’s hard to go wrong with anything directed by Frank Capra or starring Jimmy Stewart.

Saving Private Ryan is one of my favorite war movies, along with From Here to Eternity. Great military performances include George C. Scott in Patton, Tom Cruise in Born on the Fourth of July and of course, Peter Sellers in Dr. Strangelove or: How I Learned to Stop Worrying and Love the Bomb, where even if you don’t like the politics, you can revel in the wonder of free speech.

Not everyone is a fan of war movies. Pastor Denny Wayman, co-author of the Cinema in Focus column, had this to say: “Rather than films showing military courage, the films that bring me the greatest joy about my fellow Americans are those that reveal moral courage. One such film is the true story of the Amistad Africans with President John Quincy Adams defending the humanity of these people who were illegally captured and forced into slavery in the days before the Civil War. Another film is the true story of Sister Helen Prejean as she helped a young man confess his atrocious crimes and find peace with God moments before his death by lethal ejection in Dead Man Walking. Standing together to do what is morally and spiritually right is the best of American culture.”

Speaking of American culture, check out Walt Disney’s Fantasia, then marvel at the fact that it was made in 1940. Or revisit Toy Story, Star Wars and The Matrix for their artistic and technical merits. For a great overview of musicals, another favorite America genre, there’s always That’s Entertainment, parts one, two and three.