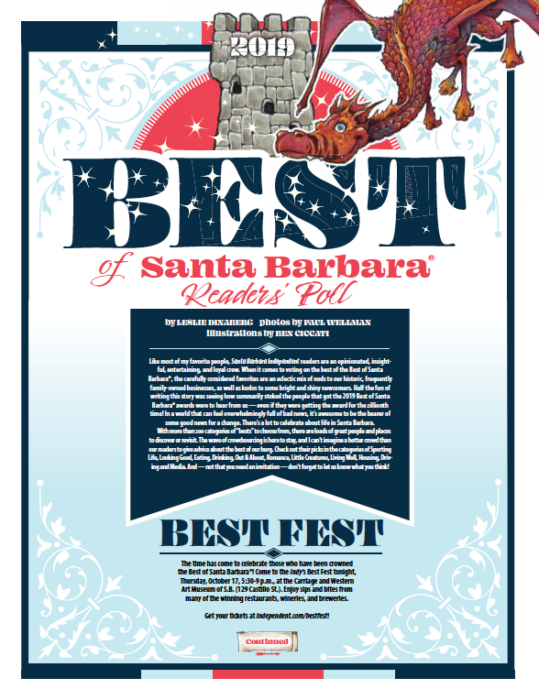 So, I had the honor of writing up the Santa Barbara Independent‘s Best of Santa Barbara winners this year. It was a huge, fun project. People were so happy to hear from me and so excited to have won! You can read the whole thing (203 winners at last count) by clicking here, or on the PDF below. 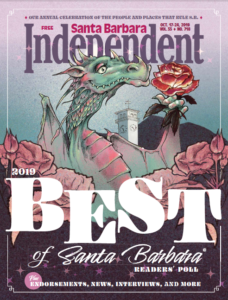 The humble jigsaw puzzle has been given a modern makeover thanks to Piecework (pieceworkpuzzles.com) co-founders Rachel Hochhauser and Jena Wolfe. Hochhauser, who was born and raised in Santa Barbara, discovered her love of the meditative qualities of puzzles when she was rained in during a visit to Yosemite. Soon the pair, who are partners at Major, a creative agency specializing in brand strategy and design, began working on puzzles as a way to unplug and unwind, but they were dissatisfied with the selection available.

“We decided to start Piecework because we wanted to bring thoughtful curation and design to an activity we really loved doing and to show people how much pleasure can be found in a puzzle,” says Hochhauser.  —Leslie Dinaberg 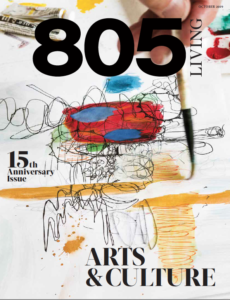 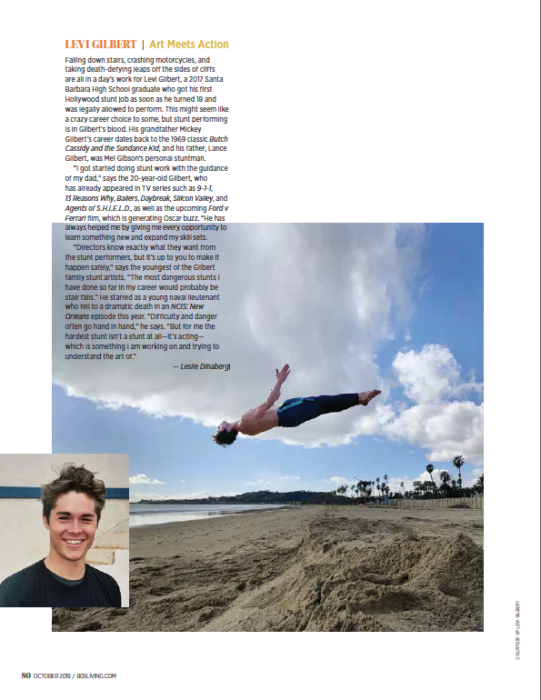 Falling down stairs, crashing motorcycles, and taking death-defying leaps off the sides of cliffs are all in a day’s work for Levi Gilbert, a 2017 Santa Barbara High School graduate who got his first Hollywood stunt job as soon as he turned 18 and was legally allowed to perform. This might seem like a crazy career choice to some, but stunt performing is in Gilbert’s blood. His grandfather Mickey Gilbert’s career dates back to the 1969 classic Butch Cassidy and the Sundance Kid, and his father, Lance Gilbert, was Mel Gibson’s personal stuntman.

“I got started doing stunt work with the guidance of my dad,” says the 20-year-old Gilbert, who has already appeared in TV series such as 9-1-1, 13 Reasons Why, Ballers, Daybreak, Silicon Valley, and Agents of S.H.I.E.L.D., as well as the upcoming Ford v Ferrari film, which is generating Oscar buzz. “He has always helped me by giving me every opportunity to learn something new and expand my skill sets.

“Directors know exactly what they want from the stunt performers, but it’s up to you to make it happen safely,” says the youngest of the Gilbert family stunt artists. “The most dangerous stunts I have done so far in my career would probably be stair falls.” He starred as a young naval lieutenant who fell to a dramatic death in an NCIS: New Orleans episode this year.

“Difficulty and danger often go hand in hand,” he says. “But for me the hardest stunt isn’t a stunt at all—it’s acting—which is something I am working on and trying to understand the art of.”