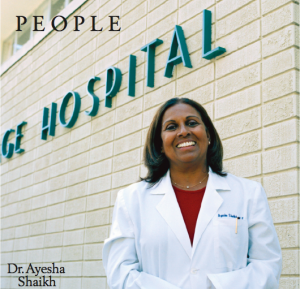 Having practiced obstetrics and gynecology in Santa Barbara for the past 20 years, Dr. Ayesha Shaikh (rhymes with “bake”) has a hard time walking through town without someone recognizing her.

Her daughter Sarah, 20, a student at Middlebury College, says she can’t go anywhere without someone recognizing her mom.

Her husband of 25 years, Mohammed, an engineer who owns Image-X, frequently quips that he’s “the only Indian Muslim who walks six feet behind his wife.”

He might have to widen that perimeter in January, when his wife’s network will expand even further as she takes over as Cottage Hospital’s Chief of Staff.

Her new assignment, to serve as a liaison between the hospital’s administration and its medical team, comes at one of the most exciting and tumultuous times in the facility’s history, as construction gets underway on a $500 million new hospital, which is not expected to be completed until 2013.

As anyone who’s been through a home remodel can testify, living through years of construction can make you feel like taking a hammer to the closest available target, and Dr. Shaikh will be right there to absorb the blows.

“You know how physicians are,” she said. “If they want to be heard they can be heard. … I think I’ll be hearing a lot of, ‘where’s my parking!'”

Soothing frazzled nerves comes naturally for Dr. Shaikh, having delivered thousands of babies over the years (she stopped counting after her first 250). She hasn’t lost a father yet, although there have been a few close calls.

“You know when they start turning funny shades of color, you say, ‘okay, there’s a chair, why don’t you take a seat and sit down. I’ll take care of the baby and the mom,'” laughs Dr. Shaikh, her lilting Indian/British accent having the desired calming effect.

“It’s amazing how these guys can talk and do all this Rambo-style stuff and when it comes to delivery they become like little ducks … They see that little baby and they burst into tears.”

The joy in sharing these moments is one of the reasons why Dr. Shaikh plans to continue delivering babies, despite her new administrative responsibilities at the hospital.

“It’s fulfilling — I don’t want to say you feel great, but you feel nice, especially when things go well and it’s someone who you’ve seen through a lot of difficult times. You just feel so good.”

A group of Santa Barbara High School grads is having a positive impact on worldwide healthcare while headquartered in their hometown. No less than four SBHS alumni are part of the 24-person staff at Direct Relief International, the locally based global nonprofit agency that provides essential materials to areas hit by disaster.

Annie Maxwell, a 1997 SBHS graduate, was the first in a wave of Dons. She caught wind of the organization in 2002, when CEO Thomas Tighe was on the cover of Santa Barbara Magazine.

Click here to read this story in Santa Barbara Magazine

“My mom, in probably one of her valiant efforts to try to get all of her children close to home, sent it to me at Michigan when I was at school and said, ‘you should work here,'” said Annie, who started as an unpaid intern and is now Chief of Staff.

In a matter of days, “I went from a warehouse in a beach town to a UN high rise with security and dogs sniffing bombs,” said Annie. “I keep waiting for the director to call cut.”

Her longtime friends — Lucy Anderson, Damon Taugher and Brett Williams, all class of 1998 — are also stoked at their good fortune in being able to have a positive impact on relief efforts such as Hurricane Katrina.

The organization’s gotten this great lift from having them here, said Thomas, who praises his young colleagues as hard working, incredibly smart and disarmingly polite.

Plus their affection and respect for each other and for the mission of Direct Relief is contagious.

“It’s great work because the more you do, the more people are directly affected,” said Brett, the warehouse manager, calling from Ecuador, where he detoured from sightseeing to visit potential partners for Direct Relief.

Lucy also took time off from serving as development manager to visit Direct Relief hospitals while vacationing in Nepal. “It was far and away the highlight of my trip, just seeing the difference that one Direct Relief shipment can make was incredible.”

Based on his own vision, Damon is now directing a new program that has provided $12 million in free medicines to clinics throughout California, a new direction for Direct Relief.

“I don’t think anyone when they’re 14 says ‘wow do you think we could be influential in running the largest international aid organization in California in ten years,'” said Annie. “It’s just not something that you usually say over lunch in the quad. … I was more worried about not failing my English quiz and hoping that we’d beat San Marcos.”

At least 37 tons of medical and personal care supplies–soap, toothbrushes, toothpaste, etc.–have been shipped (FedEx did it free of charge) to at least 41 health facilities in the Gulf region. DRI also donated $1.1 million in cash grants to clinics and hospitals there.

More than $800,000 of anti-infective and antiparasitic agents, analgesics, rehydration salts and water purification tablets were sent to the Mumbai Public Health Department.

More than $32 million in cash and supplies–enough to administer full courses of pharmaceutical treatment to at least three million people–were donated to healthcare facilities and nonprofit organizations in the affected countries.

With a donation from Alcon Laboratories, 6,000 units of eye lubricant were sent to firefighters and public safety officials in San Diego.