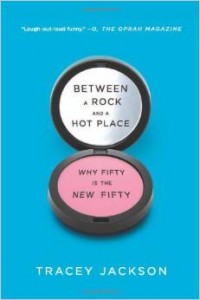 Between a Rock and Hot Place, by Tracey Jackson

Let me start out this column by saying that I am not 50 yet.

I am nowhere near 50 years old.

The fact that I have difficulty wrapping my head around this oh-so-obvious reality was part of the inspiration for Tracey Jackson‘s humorous new book, Between a Rock and a Hot Place: Why Fifty is Not the New Thirty, a part memoir, part self-help, part rant and always entertaining look at what happens to women when they hit the big Five-O.

“The idea that just because we want to we can turn back the clock and pretend to be thirty is both amusing and insane,” laughed Jackson, speaking to me from the back room of a hair salon. This busy lady fit in our interview during a quick trip home to New York before flying off to D.C. to continue a book tour that includes visits with Kathie Lee and Hoda, Meredith Vierra on “The Today Show” and the Writing Mamas of Corte Madera County.

“Being on a book tour is tiring, but it’s a good kind of whirlwind,” said Jackson, who has had a lot of whirlwinds since her childhood in Santa Barbara, where her extended family still resides. A comedy screenwriter for 17 years–Confessions of a Shopholic and The Guru are some of her better known titles–Jackson writes frankly about being shocked when she got older and the writing jobs started drying up. Ironically, her last screenwriting job was adapting a book called “The Ivy Chronicles,” about a woman who loses her job and reinvents herself.

Jackson also reinvented herself, producing and starring with her daughter in a documentary film called Lucky Ducks, (about the complex relationship boomer parents have with their over-indulged teens), daily blogging and most recently, writing “Between a Rock and a Hot Place.”

All of the hot button middle age stuff is there, with her amusing takes on what could be depressing topics like menopause (“it’s not all in your head, it’s in your vagina”), money (“I didn’t mean to spend it all”), death (“ready or not, here death comes”) and my favorite, “Sex, Estrogen and Not So Much Rock and Roll.”

Of course I immediately turned to the chapter about sex, where Jackson describes in hilarious detail her attempt to spice up her marriage with a trip to a very posh sex store. The resulting misadventures involving Jackson, her husband, a shiny black bag of toys, and Lola Falana (their Chihuahua) made me laugh so hard that I woke up my husband.

With sex, face lifts, finances and sandwich generation challenges of aging parents and exhausting teenagers sitting side-by-side, the book casts a pretty wide net over the issues of “second adulthood.” Jackson said that was her plan from the start.

She still manages to get the comedy in– when she talks about death she includes the story of her husband’s spinning teacher dropping dead at the gym. In fact, no matter what the topic, the laughs and hard truths resonate throughout both the book and my conversation with Jackson.

“We aren’t old and we aren’t young; we are in kind of in-between states, passing through the transit lounge of life,” she writes. “No matter how much Botox you get, things will start falling apart: some marriages end, some kids are job, some jobs are terminated, most faces fall and all boobs do. No one bothered to fill us in on this.”

Luckily that’s where Jackson and “Between a Rock and Hot Place” come in.