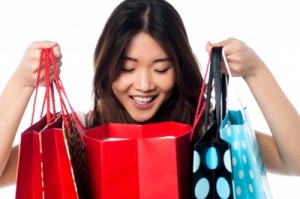 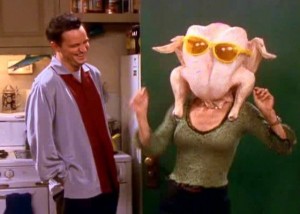 Other than the day the clocks “fall back” and I get an extra hour of sleep, Thanksgiving is my favorite holiday. Thanksgiving is always reliably stuffed with good will, relatively little religious baggage, and predictably tasty food-except for that one year at my ex-Uncle’s house, where there were no mashed potatoes. NO mashed potatoes. The lack of mashed potatoes on Thanksgiving wasn’t the only factor leading to his “ex-Uncle” status, but that would have been more than enough for me.

Thanksgiving is also the national celebration of a guilt-free day without dieting. Sure, I sat in the Weight Watchers meeting and nodded my head with false enthusiasm when they talked about fat free pumpkin pie and guiltless gravy, but come Thursday those horrors will be completely erased from memory. Thanksgiving is a great time to take stock of your life, and be honest about your priorities. One of mine is real gravy. So I’ve got a lot to be grateful for, not the least of which is that I won’t be the one cooking on Thursday-and there will be mashed potatoes.

When I count my blessings, living near my family-and actually wanting to spend time with them-tops the list. Not only will I have to travel a mere seven minutes to attend our annual Thanksgiving gathering, but my husband, son, parents, mother-in-law, sister, various sisters- and brothers-in-laws, aunts, uncles, nieces and assorted friends who invariably show up to dinner are almost guaranteed to do something that will make writing my next column a snap.

Who says you have to survive a tragedy to find your writerly inspiration? I’ve been truly blessed with a wealth of comedic material in the form of my family and friends. And I’m thankful that, through trial and error, they’ve still found a way to love me, despite my shameless exploitation of their foibles for my own personal amusement and slight financial gain.

Though my friends may occasionally (okay often) inspire “bank account envy” and “real estate envy,” they never inspire “job envy,” thanks to my wonderful employers, they allow me to write for a living in a way that’s fun, intellectually stimulating, creative, and flexible enough to allow me to hang out with my son every day after school.

Speaking of school, I’m very grateful for the patience of my son’s teachers. Sure, I find his fascination with fake accents and made-up figures charming, but there’s a genetic payoff for me. That his teachers keep nodding their heads and smiling, day after day, fills me with wonder and gratitude.

Along with the big things-love, family, friends, health, work, and a wonderful support system-I’ve got a lot of little things to be grateful for this year. Unlimited long distance minutes, so I can talk to my best friend Jacqueline; my laptop computer and free wireless Internet at Cafe Zoma, so I can work during soccer practice; the treadclimber machines at my gym; those gracious 8 a.m. drivers who let me merge with traffic (you ungracious drivers know who you are); and of course, I’m especially thankful that it’s chocolate catalog season. Though I’ve never actually ordered anything from Hickory Farms, their food porn catalog has kept me company through many a long winter’s night.

The other advantage of daylight savings time is that I am getting to sleep a little bit earlier these days, which I’m grateful for. This brings me to my most favorite thing about my most favorite holiday-it’s the only day of the year that nobody asks if you’re sick or pregnant when you go to take a nap.

Share your blessings with Leslie at email. For more columns visit www.LeslieDinaberg.com. Originally published in the Santa Barbara Daily Sound on November 18, 2011. 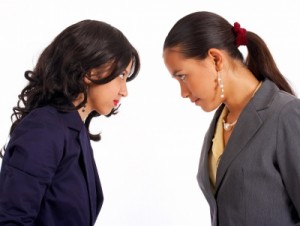 A friendship, too, is a kind of romance-complete with possessiveness, jealousy and mistrust. -Nick Laird

While sifting your friends from your foes should be straightforward, it’s not always obvious who’s got your back, and who’s getting ready to stab a knife in it.

Friends are supposed to bring out the best in you, even when you’re at your worst, which is why it’s so disturbing when someone you thought was your friend turns out to be a frenemy. Whether you’re dramatically dumped, or you simply discover that she’s just not that into you, you never forget your first frenemy.

“Sometimes people bring out the worst in each other,” I tried to explain to my young friend, who had recently been excluded from the cool kids group at lunch. The poor girl was in tears, and I certainly couldn’t blame her. All summer long she had played with Queen Bee, a neighbor, and returned to fifth grade thinking they were the best of buds. But as soon as school started, poor Wannabe was ostracized in favor of Queen Bee’s more popular minions.

“It’s like all of our summer fun never happened,” Wannabe wailed. “We hung out at the water park, the beach, went to the movies, had tons of sleepovers. I can’t believe she doesn’t want to sit with me at lunch!”

Hearing this sad story brought me right back to my own fourth grade summer and the back-to-school diss from my own generation’s Queen Bee. Quite frankly, I’m still devastated and I want my yellow ski jacket and my puka shell necklace back.

“Will it be any comfort for you to know that she’s going to end up divorced, raising three kids from three different fathers?” I offered.

Wannabe looked at me blankly. “She was mean to me yesterday at school, but then after school she came over to play like nothing had happened.”

“Then today, she spread out her lunch box and said there was no room for me at their table,” sobbed Wannabe. “I can’t believe it.”

Unfortunately, I can. You just found yourself your first frenemy.

It’s hard enough for an adult to understand the wicked combination of arrogance and insecurity that creates cliques, let alone explain them to a child who has just had her heart broken.

Times may change but mean girls are eternal.

I took a deep breath.

How could I explain to Wannabe that even the best of friendships can be odd, complicated and messy? Every relationship has an ever-shifting balance of power. There are some people, like Queen Bee, who thrive on other people’s neediness or weaknesses. She bosses her little bees around and they’re too spineless to stand up to her.

Wannabe might have been sad, but she wasn’t spineless.

How could I help her understand that there’s this whole social convention when a romantic relationship breaks up, but there’s no parallel convention for friendships, even though the breakup of a friendship can be more shocking and more devastating?

“Does any of this make sense?” I asked, and again I got a blank stare from under her tears.

I took another stab. “If someone doesn’t treat you like a friend, all the time, no matter who else is around or who else is watching, then they’re probably not really your friend,” I explained.

Finally a flicker of recognition in her sad, sweet eyes.

“They are what we call a frenemy, someone who is both a friend and an enemy, which is no way to be a friend.”

I almost yelled at her that the word was frenemy, not bend, and that she should grow up already because my word was better than hers-seriously, bend? Frad? What are you, a ten-year-old?-but then that might not have been the friendliest thing to do.

“Exactly. Someone who will continue to bring you down and make you sad until you stick up for yourself, at which point you’ll probably have a fight and won’t be friends anymore anyway.”

“That doesn’t sound like someone I want to be friends with in the first place,” she said.

“That’s right,” I said. “It’ll get better, I promise. That’s your first lesson of the school year. You’ll have lots of good and true friends. Now give me your lunch money.”

When Leslie’s not offering sage advice to anyone who will listen, she can be reached at Leslie@LeslieDinaberg.com. For more columns visit www.LeslieDinaberg.com. Originally published in the Santa Barbara Daily Sound on November 11, 2011.