I giggle every time I hear the word “Turducken.” I’m not entirely sure why. Maybe it’s the first four letters, or the “duck” (literally) in the middle, but Turducken references abound this time of year and I can’t help but chuckle every time I hear or read the word.

I’ve never even tasted Turducken, though I have tried Tofurky, and Turducken has got to be better than that. It’s certainly funnier, and not at all self-righteous. Still, I couldn’t help but wonder about the origins of this Thanksgiving delicacy, so I decided to do some research.

In my head, I keep hearing Tevye from Fiddler on the Roof singing “Turducken, Turducken. Turducken!”

According to a 2002 New York Times story by Amanda Hesser, turkey found his inner duck (and chicken), “Once upon a time, possibly at a lodge in Wyoming, possibly at a butcher shop in Maurice, Louisiana, or maybe even at a plantation in South Carolina.” She wrote that “an enterprising cook decided to take a boned chicken, a boned duck and a boned turkey, stuff them one inside the other like Russian dolls, and roast them. He called his masterpiece Turducken.”

Of course these scenarios are certainly possible, as are the unsubstantiated claims that Cajun-Creole fusion chef Paul Prudhomme created the Turducken. But here’s the thing: all of these Turducken theories revolve around the idea that a man was the one who created the Turducken. I for one have never, in my 40-something year history of Thanksgiving celebrations, seen a man willingly move more than four feet away from any TV screening football games on Thanksgiving Day.

Therefore, it seems completely logical to me that a woman must have invented the Turducken.

Here’s my theory. You probably know the tune.

I know an old lady who swallowed a Turducken

I don’t know what kind of booze she was chuckin

She first bought a chicken

But then in walked Chuck

He’d picked up a duck

With no room in the freezer

She’d have to cook both, to please the old geezer

She consulted Giada and Martha, her coven

They both told her simply to turn on the oven

What she did at this point isn’t perfectly clear

But then Rita showed up at the door with a turkey

The old lady took it; she didn’t want to be jerky

The oven then beeped it was ready to cook

How could the old lady get off the hook?

There was no way to fit three birds in her range

She had an idea, although it was strange

She’d seen a commercial a time long ago

Where peanut butter and chocolate did a Do-Se-Do

If Reese’s can do it then so can I

She gulped her martini and let out a sigh

And there you have the real explanation for how the Turducken came to be. Happy Thanksgiving! 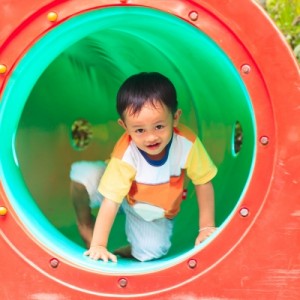 Photo by by Naypong freedigitalphotos.net

This is also why I get so worked up when I hear about teachers punishing a child for not doing their homework, or misbehaving in class, by keeping them inside during recess. All kids need to run around and let off steam on a regular basis, but kids who have a hard time in class need the break even more.

I’ve got plenty of anecdotal evidence from my own son and his friends, and there’s even scholarly research to back me up. I love when that happens.

* An analysis of nearly 200 studies on the effect of exercise on cognitive functioning suggests that physical activity supports learning (Etnier).

* Fourth-graders were more on-task and less fidgety in the classroom on days when they had recess, with hyperactive children among those who benefited the most (Jarrett).

* In studying the link between recess and classroom behavior among about 11,000 children, researchers found that those who had more than 15 minutes of recess a day showed better behavior in class than those who had little or none. (Barros, Silver and Stein).

The bottom line: one of the best ways to improve a kid’s performance in the classroom is to take them out of it for a while.

This is why it just kills me when teachers punish children by taking away recess privileges. That also struck Dr. Romina M. Barros (who researched the link between recess and classroom behavior) as illogical. She told the New York Times, “Recess should be part of the curriculum. You don’t punish a kid by having them miss math class, so kids shouldn’t be punished by not getting recess.”

Yet due to school budget cuts and an increased focus on academic standards, lots of American schoolchildren miss out on unstructured playtime with their peers, so much so that there is a “Right to Recess Movement” building around the country.

While recess doesn’t seem to be a danger here in fitness-conscious Santa Barbara-in fact the Orfalea Foundation is now funding an initiative to put “Recess First” before lunch with the idea that kids will be able to better concentrate on making healthy food choices after they’ve had time to run around-the practice of taking away recess as punishment is still alive and well.

Most people wouldn’t dream of denying a child lunch to make more time for math, or withhold breakfast if a child misbehaved, but they seem perfectly satisfied to starve a kid out of recess.

With all the moaning about kids turning into couch potatoes, sedentary obese blobs, or video game-playing zombies, I say let’s make some healthy choices about school punishment strategies. 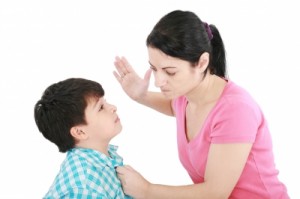 Spanking—like fountain pens, hardback Webster’s Dictionaries, and control top panty hose—is one of those things that is still around, but hardly ever used anymore. According to a recent story in the New York Times, shouting has taken its place as the discipline du jour.

“Many in today’s pregnancy-flaunting, soccer-cheering, organic-snack-proffering generation of parents would never spank their children,” writes Hilary Stout. “We congratulate our toddlers for blowing their nose (‘Good job!’), we friend our teenagers (literally and virtually), we spend hours teaching our elementary-school offspring how to understand their feelings. But, incongruously and with regularity, this is a generation that yells.”

Of course I yell from time to time-usually something like “hurry up,” or “I can’t believe you forgot again”-but it’s really not my go-to behavior, as evidenced by the fact that both my husband and I can bring our son to tears by simply changing the tones of our voices.

When I get frustrated I’m more of a “mean-sarcastic-if-you-could-hear-me-you’d-be-crying-hysterically-commenter-under-my-breather” than a yeller. Of course I feel incredibly guilty about this within minutes. Probably even worse than I would have felt if I’d just yelled.

Apparently, I’m in the minority.

A study published in “The Journal of Marriage and Family,” says 88 percent of the families interviewed admitted shouting, yelling or screaming at their children in the previous year and that percentage jumped to 98 percent in families with seven-year-old children.

I decided to do a completely unscientific survey of my own and ask my friends what they thought about this shouting as the new spanking theory.

Not surprisingly, the yellers were in the majority.

“I yell, I scream, I swear, and mostly I seem to be talking to myself,” says T. “Sometimes I give myself a sore throat from yelling at my kids, but it seems to have no effect on them whatsoever.”

“Dude, I am a total yeller. AWFUL yeller,” admits S. “I yell myself hoarse sometimes and my entire family just ignores me. Which is as it should be.”

But does yelling really yield any results other than working out your lungs?

Some parents say it does if used strategically.

“Sometimes when my toddler is yelling in the car for no reason-and she knows when she’s doing it to push my buttons-I yell back,” says G. “Not at her, I just yell out one loud ‘Ahh!’ and it immediately stops her. She doesn’t cry, she doesn’t sulk, she’s not emotionally scarred, she just looks at me like I’m a little crazy for a second then behaves.”

“Whatever works,” agrees L. “Two of my kids don’t need yelling at. They listen and are sensitive and know the right thing to do. The third is not sensitive and is very, very stubborn with wanting to do want he wants. I’m a different parent with him. I use yelling as a last resort to snap him out of his relentless behavior.”

Never one to mince words, M, the mother of four exceptionally well-behaved children, says, “People who don’t yell or spank are usually the ones with the biggest brats!!!!” This comment touched a few nerves.

“Yelling, like anything, can be abused. I teach two and three year olds and NEVER have to yell at them to get them to listen. I am consistent and loving and firm in my day. Children do not need to be yelled at nor do adults. Yelling solves nothing,” says J.

“I have never yelled at my son and he is nowhere near a brat. I agree with J, being consistent, loving and firm has worked for me. I just think you need to act like you want your children to act,” says L. “If you’re a yeller, I guarantee your child will become a yeller. We have to be an example to our children.”

All of this research and I’m still not sure how to feel about yelling, other than guilty. My extremely scientific conclusion: depending on who you want to listen to, you’re either setting a terrible example for your children by yelling at them or dooming them to a lifetime of brattyness if you don’t yell at them.

I guess the best news is that however you feel about yelling at your kids, and whatever you actually do behind closed doors, you’re definitely not alone.