Environmentally friendly practices and fashion come together at della terra (dellaterrashoes.com), a new footwear brand from Designer Emily Landsman ’05. Prior to its launch in June, the new brand hit the ground running, winning four Global Footwear Awards for Landsman’s initial designs using vegan and recycled materials to create a PETA certified line of shoes that don’t sacrifice style or comfort.

“My time in the art studio program at UC Santa Barbara had a huge impact on my career as an eco-footwear designer, especially Kip Fulbeck’s mentorship that allowed me the opportunity to explore the intersection between art, fashion and the digital world. It was Fulbeck’s teachings that ensured we all examined our position in the business and art landscape, bringing awareness of identity politics to the forefront of my mind,” says Landsman, who is the founder and CEO of della terra.

“A lot of my inspiration also comes from UCSB’s surrounding areas and amazing backdrops, which granted me the chance to explore a design thinking process that I have continued to apply to each and every project I have worked on since my time at the school,” Landsman says. “While I spent a large chunk of my career in major cities like New York and Boston, Santa Barbara’s landscape has continued to be a constant presence in my work. della terra translates to ‘of the land’ and UCSB’s surrounding area is a very large part of that inspiration behind the name. Being able to merge this while contributing positively to the planet will continue to always be my initiative as a designer and business owner.” 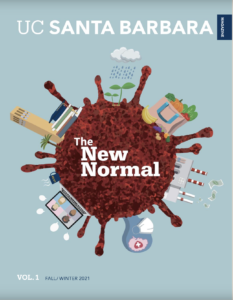