UCSB presents the inaugural UCSB Arts Walk on Wednesday, April 11, from 4:30-8 p.m. at various locations across the campus. The event gives students, faculty, staff and community members the opportunity to visit galleries and studios, watch preview performances and behind-the-scenes rehearsals, and participate in programming designed to highlight the artistic creativity and talent of the UCSB community. Best of all, everything is free of charge.

Highlights from the Department of Music include an open rehearsal of a faculty duet featuring cellist Jennifer Kloetzel and pianist Robert Koenig, plus performances by members of the Chamber Choir, Music of India Ensemble, Flute Choir, Jazz Combos, Middle East Ensemble, Chamber Players, Clarinet Choir, Gamelan Ensemble, and more. Guests can interact directly with performers during Q&A sessions following several of the events, such as a performance of scenes from UCSB Opera Theatre’s February production of Mozart’s The Marriage of Figaro and composition graduate student Brandon J. Rolle’s electro-acoustic music exhibition.

The Department of Theater and Dance also presents a wide variety of performances, open rehearsals, and exhibitions, including an open rehearsal for the department’s upcoming production of Cabaret (May 25-June 3), as well as performances by UCSB Dance BFA students in outdoor spaces surrounding the Theater and Dance buildings. The UCSB Dance Company and Freshmen Dance Company presents a special concert in the Old Ballet Studio (HSSB), while exhibitions showcasing puppets and work by UCSB Design students are also on display. Interactive playwright showcase stations will give guests the unique opportunity to work with student playwrights to compose novelty pieces on the spot.

On view from the Department of Art are multiple exhibitions of student work in the Art Building #534 and at the Red Barn Project Space in the Old Gym, Building #479, (near the bus loop by the Pollock Theater). Highlights include an exhibit of senior artwork in the GlassBox Gallery in Arts 1328, and from 7 p.m. on, Windows—a sampler of videos from Maya Gurantz’s “Intermediate Digital Video” class projected from the second story windows of Arts 2220, overlooking the bike path. In the Red Barn Project Space, UCSB Womanhouse Collective presents SHE-DEN, an intersectional, multi-media group exhibit exploring the place of women in contemporary art and culture.

The MultiCultural Center’s lounge features an exhibition by UCSB graduate student Andrew Morrison, entitled “Indian Heritage,” a Native American art exhibition that compliments his film, Great Walls of Indian Heritage. This exhibit speaks to all walks of life, its genesis is from the red road, and the American Indian Student Association inspires its vitality. The exhibit is on display in the MultiCultural Center Lounge through June 15, with an opening reception on April 12 at 6 p.m.

The College of Creative Studies (CCS), which is celebrating its 50th Anniversary during the current academic year, offers a glimpse into the work of the College’s Art, Music Composition, and Writing and Literature students in the CCS Gallery and the Old Little Theater. An exhibition of student artwork fills the CCS Gallery, while the Old Little Theater’s programming includes performances of Music Composition students’ original pieces as well as readings from Writing & Literature students and faculty.

UCSB Art Design & Architecture Museum has three terrific winter exhibits opening this month. Chiura Obata: An American Modern is on view Jan. 13-April 29 and features the work of Chiura Obata, one of the most significant Japanese American artists of the last century. Also on view during that same time period is Jane Gottlieb Photographs France, featuring the vibrantly colored, energetic cibachrome vision of Jane Gottlieb, a local artist whose work has been exhibited widely and featured in Santa Barbara Seasons.

Also opening on Jan. 13 and on view through April 1 is art by the late Keith Puccinelli, whose renowned work has been featured in Santa Barbara Seasons and who recently passed away.

Born in Okayama, Japan, and working primarily in California, Obata emigrated to the U.S. in 1903 and embarked on a seven-decade career that saw not only the growth of an international American art but also xenophobic laws and the mass incarceration of Americans of Japanese descent during World War II. Obata emerged as a leading figure in Northern California’s art scene, serving as an influential art professor at the University of California Berkeley for 22 years, and as a founding director of art schools at the Tanforan Assembly Center in California and the Topaz Relocation Center in Utah during the Japanese American Internment (1942–45).

Chiura Obata: An American Modern surveys Obata’s rich and varied oeuvre, featuring more than 150 superb works of art, many of which have never been on public display. Drawing from private and public collections, the retrospective showcases representative works from every decade of Obata’s career and presents them under thematic groupings in a loosely chronological order.

The many smaller, never-shown works in this retrospective illustrate Obata’s tireless pursuit of better techniques and devoted appreciation of the detail of everyday life.

“With a prodigious and expansive oeuvre, Obata’s seemingly effortless mastery of, and productive engagement with, diverse techniques, styles, and traditions defy the seemingly incompatible categorizations of what we have come to define as ‘American/European’ and ‘Japanese/Asian’ art,” says Professor ShiPu Wang, curator of the exhibition. “Obata’s faith in the power of art, his devotion to preserving the myriad grandeur of what he called ‘Great Nature,’ and his compelling personal story as an immigrant and an American all make Obata and his art as relevant to our contemporary moment as ever.”

Jane Gottlieb is a photographer living in Southern California, where she was born and raised. In her early 20s she made her first trip by herself as a young professional to Paris. The images she took then, and in many subsequent trips, have been a touchstone of her life’s work. She has returned to them again and again in the last decades, changing them progressively to meet her vision of France as the technology available to her has advanced.

Gottlieb’s vision of France is not like anyone else’s. It is riotous in color, hyper-vibrant in energy, and deeply Californian, shot through with a purely Mexican palette. When she discovered the possibility of hand painting cibachrome prints she had the tools to change the world to match her vision. Printing from her library of color slides, she could brighten them up and give them a new exciting life. The possibility of saturated, unrealistic color was released from Pandora’s box, not to cause trouble but to irritate the eye like a grain of sand in an oyster, producing pearls of perception.

The exhibition includes 20 works by Gottlieb, which survey both the development of her techniques and the specific motifs she has concentrated on in France. The photographs range in date from the late 1970s to the mid 1990s, and the prints from the early 1980s to the present. In addition, the exhibition includes, by way of contrast, late 19th-century photographs and postcards, which express the typical way photographers and visitors have viewed France, and highlight the originality of Gottlieb’s images.

With the cibachromes and then her digital prints, the power of Gottlieb’s vision has been widely recognized. Her work has been exhibited internationally and locally, from Basel, Lisbon, London, Paris, Rome, and Milan, to New York City and Denver, and in Los Angeles and Santa Barbara. Gottlieb’s work resonates across a broad range of viewers and interests.

To announce the extraordinary gift of works and an archive by Keith Puccinelli as well as the recent establishment of The Frances Garvin and Keith Julius Puccinelli Endowed Fund, the AD&A Museum is mounting a celebratory exhibition. Featuring Keith Puccinelli’s work and selections from the couple’s personal collection, this exhibition is a modest installation in anticipation of a larger, forthcoming presentation of this incredible donation. Including a selection of Keith Puccinelli’s drawings, sculptures, sketchbooks, graphic designs and art by local and international folk artists, this installation underscores how this couple, recently deceased, lived an inspired, creative life.

Admission to UCSB Art, Design & Architecture is always free. The Museum is closed Mondays and Tuesdays and open to the public from noon-5 p.m. daily, except Thursdays, when it is open from noon to 8 p.m.

A visit to UCSB’s Art, Design & Architecture Museum is always full of delights, and last week was no exception. Curator Elyse A. Gonzales kindly walked me through the current exhibitions.

This includes “Alice Aycock Drawings: Some Stories Are Worth Repeating, Early Work,” a fascinating complementary exhibit to the current Santa Barbara Museum of Art show which also highlights the prolific Aycock, an artist best known for her large-scale installations and outdoor sculptures.  Drawing, however plays a vital role in her creative process and the AD&A Museum installation focuses on the early years of the artist’s career, 1971–1984, and includes detailed architectural drawings, maquettes, and photodocumentation for both realized and imagined projects. It is on view through April 19.

Both exhibitions are well worth a look, as is the student-curated show “Duke and the Masters: The Sedgwick Collection, ” on view through April 19.

The Art, Design & Architecture Museum on the UCSB Campus  is open Wednesday–Sunday from noon–5 p.m. Admission is free. 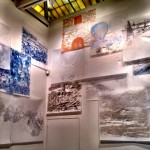 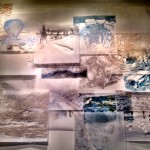 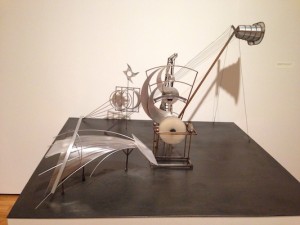 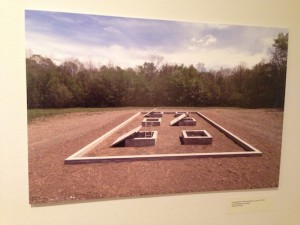 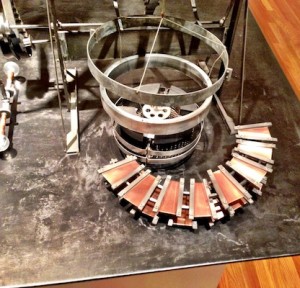 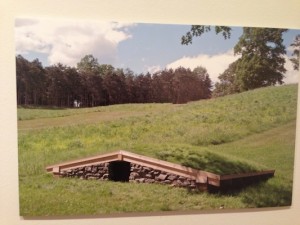 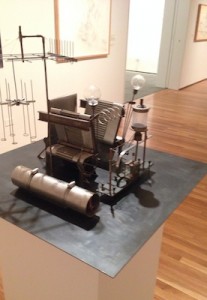