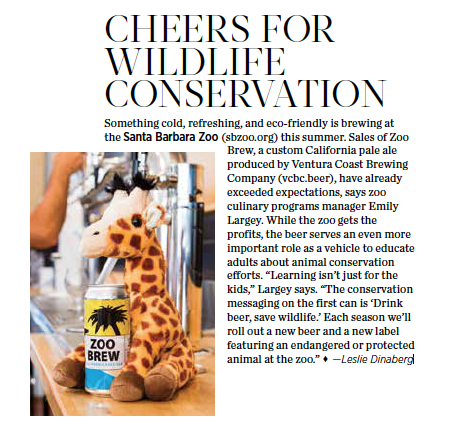 It’s sure to be a wild party this weekend when Firestone Walker’s Wild Ale Facility in Buellton marks its fifth anniversary with a “Feral One” release party on Saturday, March 3.

Time flies when you’re behaving wildly. “It seems like just yesterday that we made this big bet on what had long been a pet project,” says Jeffers Richardson, director of Barrelworks. “In the five years since opening Barrelworks, we’ve really grown into our home and taken our wild ale machinations to an entirely new level.”

The five year milestone is being marked by a party that features the release of Feral One Batch #5. Feral One Batch #1 was Barrelworks’ inaugural bottled beer release. They describe Batch #5 as “an unruly blend of six vintage base beers that were reclaimed from the barrel stacks and artfully combined to create a mouthwatering marvel.”

Barrelworks was established in 2013 after Firestone Walker’s wild ale program outgrew the main brewery in Paso Robles. It has since become known as a “cathedral of barrels” that produces an acclaimed variety of sour beers and hybrid ales under the watchful eyes of Richardson and Master Blender Jim Crooks.

The festivities take place from noon to 3 p.m. on Saturday, March 3 at Firestone Walker Barrelworks (620 McMurray Rd., Buellton). Tickets include pre-purchased bottles of Feral One Batch #5; a “pig plate” to build your own tacos or sliders (pig roasted on site); live music by The Ragged Jubilee; tastings of rare wild ales and barrel-aged beers; plus light bites while supplies last and a one-time 25% savings card good for merchandise and beer purchases (with exception of Feral One) that day.

For more details and to purchase tickets for event, click here. Check out Santa Barbara Seasons Magazine‘s spring 2017 story, “Where the Wild Brews Are,” here.

From Monday, October 23 to Sunday, October 29, more than 15 local breweries at over 20 locations will celebrate the inaugural Santa Barbara County Craft Beer Week with a variety of special events featuring pint nights, food pairings, special releases, live entertainment and more. Jump on the Brew Bus will offer transportation to a different city each day, giving beer lovers a fun, inexpensive safe way to explore participating breweries, from Goleta to Santa Maria. For a complete list of activities click here.

Sunday Funday is now happening every week at The Garden inside the Santa Barbara Public Market. With NFL Sunday Ticket and wide coverage of NCAA Football, you’ll never miss a game. Plus, the Garden is now serving up breakfast on weekends starting at 9 a.m. in this fun, family-friendly new venue.

Located inside the Santa Barbara Public Market, The Garden offers guests the ability to view all the games while enjoying food and 41 craft beers and eight wines on the always rotating on-tap menu.

The Garden is located at 38 W. Victoria St. (at Chapala) with free underground parking. For more information, visit sbpublicmarket.com.

Fried Chicken and Waffles from the Garden at Santa Barbara Public Market.