Firestone Walker Brewing Company (firestonebeer.com) ventures into new territory with Flow State, a monthly video series (youtu.be/Invvcsi2P24) hosted by adventurer Dylan Efron, who grew up on the Central Coast and honed his thirst for pushing the limits as a professional triathlete before becoming a producer and star of the Netflix show Down To Earth and launching the Off the Grid YouTube series with his brother, actor Zac Efron.

Flow State challenges world-class athletes and performers with outdoor exploits that are unfamiliar to them. For example, in one episode Brazilian professional skateboarder Leticia Bufoni learns to rock climb despite her fear of heights, and, in another, beach volleyball
superstar brothers Riley and Maddison McKibbin go off-roading.

“Outdoor adventure is a way of life around here, and it’s something we’re passionate about,” says Firestone Walker cofounder David Walker. “The Central Coast has been our home for 25 years, and as a local, Dylan is the perfect friend and partner to help us tell these stories.” 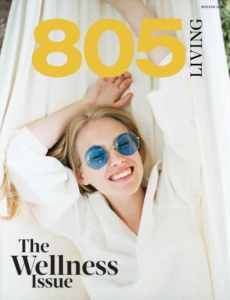 Click here to see this story as it originally appeared in the Winter 2021 issue of 805 Living Magazine.