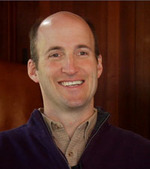 Since arriving in town 12 years ago, Ken Saxon has served on the boards of some our most successful community endeavors, including the Santa Barbara Scholarship Foundation and the Santa Barbara Foundation. Now he’s taking his experience with the unique challenges nonprofit leaders face and using it to develop a new program called “Courage to Lead.”

LD: What first brought you to Santa Barbara?

KS: My wife Jo and I moved here when our twins were 1-1/2 years old. We felt that this would be a great place to raise children and it’s really turned out to be that. I remember we came at the beginning of June and two days after we showed up was the second annual Big Dog Parade … and a couple of weeks later was Solstice and then there was July 4th and then there was Fiesta and we just thought this town was one giant parade just to welcome us to Santa Barbara.

LD: I know you left a business in the Bay Area. What is your business now?

KS: What I’ve been doing for most of the last 12 years is I’ve taken my business skills and applied them to the nonprofit sector, mostly as a volunteer. … The venture that I’m most involved with right now is a program called Courage to Lead. I’ve worked with a lot of nonprofit executive leaders, and one of the conclusions that I’ve come to from this dozen years of experience of working with them, is that I think they have a harder job than business leaders because business leaders have one bottom line they are managing to. Nonprofit leaders have at least two: a financial bottom line and a social benefit bottom line. At the same time they have less resources to draw upon and also a lot less has been invested in them.

… Also I find that nonprofit leaders are very isolated from one another. Sometimes there’s a sense that only they know what the challenges are and sometimes there’s a sense of competition. … So I helped to develop Courage to Lead. … The goal is to nurture and support them in renewing themselves and in rekindling their passion and commitment for their work. And because it’s done in a group in retreat over time, they build a deep community and they provide each other with mutual support and inspiration. … The program is based on the work of a national group called the Center for Courage and Renewal.

LD: What stage are you in the development of the program?

KS: We are launching a group this year that’s going to start in November and they are going to meet quarterly in retreat for at least a year up in Mount Calvary Retreat Center for two days at a time. … From May 7-9th, we’ve arranged for an introductory retreat … people who are potentially interested are invited to come and experience what one of these retreats is like.

LD: Is there a religious or a spiritual component to it?

KS: There’s not a religious component. Spiritual is always a challenging word because it means so many different things to different people, but yes, there’s a spiritual component in that people are given opportunities and time for reflection and inspiration relative to core questions of meaning and mission and passion and they are given space to reflect and hear their inner voice and to tap into what it is that most motivates them in life that they want to do in the world. And I would call that a spiritual. But the text and things that we use most often is actually poetry and other inspired readings that help people think about their careers and their lives on a deeper level, rather than kind of a religious text.

LD: How will you select people the first people?

KS: We have gone out to leaders in the nonprofit and philanthropic world and we have asked for nominations of nonprofit leaders that they feel would benefit from this experience given who they are and where they are in their careers. But it is also open for application. We have a website that is CourageToLeadNP.org, where people can get more information about it. … We talk about environmental sustainability but there’s a big discussion as the nonprofit sector continues to grow it’s filling a huge need in our society, but whether we can run it in a way that is sustainable, rather than just burning everybody out. That’s a tough question. I’d like Courage to Lead to be part of the answer.

LD: I think you have a unique perspective in that you’re still in your 40s and able to devote yourself to nonprofit work fulltime.

KS: Absolutely, but it doesn’t mean that other people can’t be involved. The Katherine Harvey Fellows are an example. Another example is Craig Zimmerman and I created a group called FUND, Families Uniting to Nurture Dreams. There are 20 families with children who are mostly between the ages of 6 and 16, and we got together partly to raise college scholarships for local kids, but the biggest thing that we do is we create opportunities for our children to learn about the community and really about their world through hands-on ways of getting involved in the community.

… Our group the last three years has partnered in something called Project Healthy Neighbors that is done by Casa Esperanza and Santa Barbara County and Doctors Without Borders … they put on a health fair to try to try to attract the local homeless population to come in and get check ups, to get their immunizations and to get referred out to other services that they might need … (My son Griffin) was down with me at Casa Esperanza handing out the bags to the people that came through.

…The only way I know people in town is either through my kids, their school, but mostly it’s through volunteerism, the nonprofit boards and so on and what a generally terrific group of people. I’ve developed so many relationships with people that I like and respect through volunteering.

Professional Accomplishments: “I ran a business in the Bay Area for a dozen years (FARM, First American Records Management) that was acknowledged as both a financial success and a really fine place to work and really good at customer service and I’ve been a volunteer leader here. I approach things like, as the chair of the scholarship foundation, I didn’t approach that in any way differently than being board chair of my company. … I do look at my volunteer service here as professional.”

Little-Known Fact: “My kids perform in this musical theatre group called the Adderly School, and a year or two ago they created an opportunity for parents who were willing to subject themselves to it to have the same experience as their kids did, and so I was up on stage for three nights at Victoria Hall in ‘Mama Mia.’ … I performed on stage for the first time since 8th grade and the last time.”

Originally published in Noozhawk on March 18, 2008.