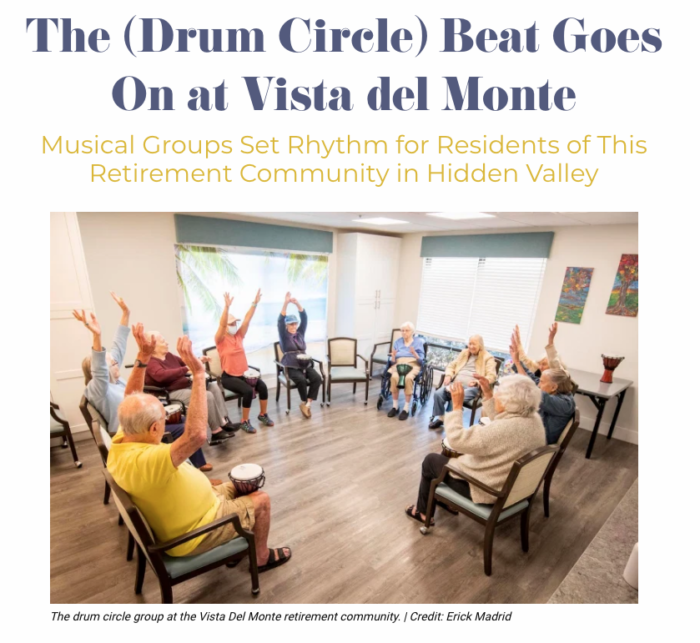 People of all ages benefit from music therapy, with especially positive changes for people with autism; visual, motor, emotional, hearing, or cognitive disabilities; or high stress levels. With these benefits in mind, the residents and staff at Summer House —which is the memory-care unit at Vista del Monte retirement care community (vistadelmonte.org)
— regularly participate in drum circles.

“The sound waves and the sound of the drums and the feel of the drums are very
powerful for those who have cognitive issues,” said Helene Hellstern, the life
enrichment director for Vista del Monte, where residents gather in a common area called The Alcove every Tuesday and Thursday. “When we tell people we are doing a drum circle, they are very willing to come to that activity, and we typically have at least a dozen
people if not more.”

First are exercises to warm up their hands and get energized. Then Hellstern uses a 70-inch computer screen to broadcast images of nature or from a particular country or culture that’s especially stimulating. “Then we start the drumming,” she said, explaining that groups are typically led by Karen Rojas. “We’ll just do different rhythms, and we’ll have the residents repeat those. And we always incorporate having the residents do their own little rhythm, and so it’s just one person doing their rhythm, and we all repeat it.”

The music, the exposure to community, and the physical activity are all beneficial. “A lot of our residents have mobility issues or are non-ambulatory, so we tend to just use hand movements — although if people want to tap their feet, that’s definitely encouraged,” said Hellstern. “The movement of the arms or the drumming itself is a really good movement. It energizes the whole body and the sound waves, because the drum is on their body—they really feel it as well as hear it.”

And there’s science as to how this helps people with memory issues. “They have
determined that music in particular sets off most areas of the brain,” she said. “And not just drumming, but other music often triggers their long-term memory.”

The drums have become a therapy tool beyond the circles as well. “Sometimes, we will just get the drums out if whatever we have planned isn’t quite working — everyone responds really well to that,” she said. “A truly holistic healing approach, group drumming breaks down social barriers, promotes freedom of expression, nonverbal communication,
unity, and cooperation.” 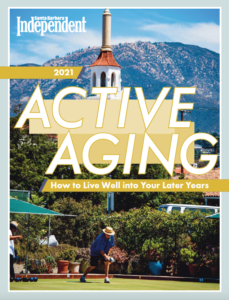 Originally published in The Santa Barbara Independent on August 12, 2021. Cover photo by Erick Madrid. To read this special section as it originally appeared in print, click here.

If you’re looking for a fun weekend getaway, check out this weekend’s Bubblyfest in Avila Beach Oct. 5-8.

BUBBLYFEST 2017 is the fourth annual event featuring more than 60 sparkling wine and champagne producers from around the world there to top off glasses and share insights on the fine world of bubbles. Taking place at the Avila Beach Golf Resort, the weekend’s events include:

Friday Evening: The very popular “Corks and Cocktails” cocktail party at the Central Coast Aquarium. Attendees come ‘dressed to the nines’ in 1920’s attire, listen to jazz and sip cocktails made with sparkling wines.

Saturday: Grand Tasting will include tasting from 70 labels both international and domestic, as well as more educational panels that are consumer focused. Enjoy light appetizers with Sparkling Wine and Champagne tasting where over 60 wineries invite you to fall in love with their bubbly.  Learn from the experts in the Seminar Series, indulge in a Champagne Toast, and relax on one of the sun bed loungers and sofas.

The 2017 festival will feature wines of Alsace, J Vineyards, Gloria Ferrar, Voveti and 60 other top sparkling wine and champagne producers from around the world together in one place to mingle with “lovers of the bubbly.”

Tickets for BUBBLYFEST By The Sea include a souvenir glass for each participant, unlimited bubbly tastings, seminars and a variety of light hors d’oeuvres. VIP events will be available on a first come, first served basis. Avila Beach Golf Resort is located at 6464 Ana Bay Rd, Avila Beach.