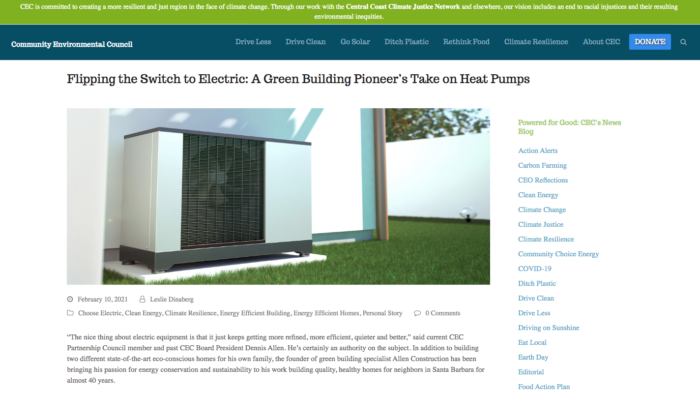 “The nice thing about electric equipment is that it just keeps getting more refined, more efficient, quieter and better,” said current CEC Partnership Council member and past CEC Board President Dennis Allen. He’s certainly an authority on the subject. In addition to building two different state-of-the-art eco-conscious homes for his own family, the founder of green building specialist Allen Construction has been bringing his passion for energy conservation and sustainability to his work building quality, healthy homes for neighbors in Santa Barbara for almost 40 years.

As the costs of heat pumps have gone down, their efficiency has continued to improve. When he was building the LEED platinum certified Victoria Garden Mews project in downtown Santa Barbara in 2011 (where he and his wife Jenny currently reside), “we didn’t even consider a heat pump,” said Dennis. “At that point they were pretty expensive. Now they are much more reasonably priced and they’re much more efficient with what they call the coefficient of performance — it can be up to four times what a forced air gas/heating system would be. All of these things are just coming on big time.”

With all of the new residential projects in California now required to have solar power, Dennis predicts that the demand for heat pumps will continue to rise. “Heat pumps are safer and healthier because you’re not burning natural gas and having the combustion fumes from the gas system, which are usually in the house. (This is why you have to have carbon monoxide detectors in homes to sense whether there is too much carbon monoxide being put out by the natural gas burning appliances.) Those are both safety and health issues. And more recent research is finding that the health issues are more serious than we were all led to believe even five years ago.”

Higher upfront costs are the primary stumbling blocks when it comes to installing electric heating and cooling systems, but, Dennis explained, “if you take into account the operational side, then it has a payback period – and from then on you’re saving money. The upfront costs are still a little bit more expensive, but that’s coming down all the time and pretty soon it’s going to be a no brainer to go all-electric. The ordinances and the state regulations are nudging people in that direction, and there are some incentive programs and so forth that help people go there. Once they go there it keeps helping to drive the cost down and it helps people save money and be healthier. So even with the slightly higher costs today it’s still worth doing.” 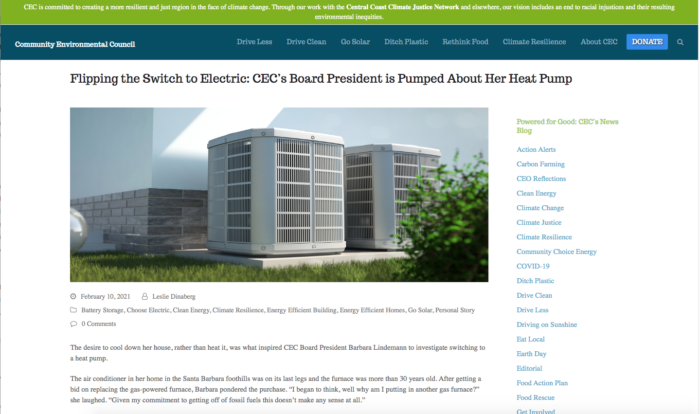 The desire to cool down her house, rather than heat it, was what inspired CEC Board President Barbara Lindemann to investigate switching to a heat pump.

The air conditioner in her home in the Santa Barbara foothills was on its last legs and the furnace was more than 30 years old. After getting a bid on replacing the gas-powered furnace, Barbara pondered the purchase. “I began to think, well why am I putting in another gas furnace?” she laughed. “Given my commitment to getting off of fossil fuels this doesn’t make any sense at all.”

She asked for advice from a few knowledgeable friends, including green builder and past CEC Board President Dennis Allen and architect Dennis Thompson, who had done a remodel for the Lindemann’s a few years ago. Both of the experts agreed that heat pumps were a good alternative to another gas furnace. “Dennis Thompson pointed out that it’s not going to be long before you’re not allowed to put more gas into homes and new homes won’t be allowed to be built with gas,” said Barbara. “He said it’s really become the new thing.”

In the meantime, Barbara had also been researching getting backup batteries for her 18-year-old solar panel system. Living in a high fire zone with frequent power outages, and knowing that her solar power system would soon need to be replaced, Barbara realized that installing a heat pump would make even more economic sense when she replaced the solar with a system that included storage batteries.

Getting the heat pump “is a matter of looking to the future and taking care of our current needs at the same time,” Barbara said. While the initial upfront cost of the heat pump was slightly more than a new furnace might have been, Barbara said her gas bill has gone down and her electricity use is only up a little, “so we’re already saving money on the heat pump, even though it was more expensive to put in — and I haven’t had a chance to give it a full test with air conditioning yet.”

When summer comes around, Barbara is looking forward to her new heat pump being able to cool her home just as effectively as a standard air conditioner would, but without relying on fossil fuels to keep her family comfortable.