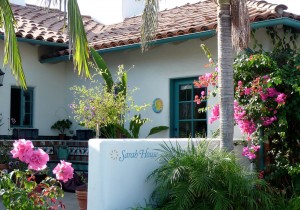 While the image of a residential care facility for people who are sick and dying doesn’t exactly conjure uplifting images, a visit to Sarah House is more inspiring than depressing.

“Sarah House is a place where you live your life until the last breath. It’s a celebration of your life,” says Kerrie Kilpatrick-Weinberg, board member of the nonprofit, which opened in 1994 as a home for people with AIDS, and has expanded its mission in recent years to focus on end-of-life care. “You have your family and the things that mean so much to you around. This is important and sometimes gets overlooked when you’re in a larger setting such as a hospital.”

According to executive director Randy Sunday, throughout the past year, 85 percent of Sarah House’s occupancy was for hospice care and only 15 percent for people with AIDS. While anyone designated as “low income” (making less than $27,000 per year) is eligible for care, about 40 percent of the people who live there were previously living on the streets, with no income at all. “These numbers have picked up because awareness has increased in the community,” he says. People often ask if there are conflicts with having formerly homeless people living alongside low-income people, but Sunday says “when you’re sitting in the living room in pajamas, it doesn’t arise; there’s a great quality about that.” He describes the atmosphere at Sarah House as, “not a luxury bed and breakfast, but there are always muffins or fresh granola. For the homeless, it might be the home that they never had. For everyone else, it’s just inspiring. The element of hospitality is something we always want to keep. The unit of care isn’t just the residents, it’s their families and friends as well.”

Working closely with the other end-of-life care agencies in town–such as Visiting Nurse & Hospice Care of Santa Barbara, Doctors Without Walls, Hospice of Santa Barbara, and Cottage Hospital’s Palliative Care Unit–who provide referrals, medical services and counseling, Sarah House offers a warm home for people to live out their days in a caring, extended family atmosphere. Named for the late Sarah Shoresman–her daughter, Linda Lorenzen-Hughes, remains active on the board of directors–Sarah House offers the highest level of medical care in an intimate, eight-bed setting, rather than a sterile hospital environment. “There’s such a need. It’s a special place, and we’re able to offer something to a group of people that may otherwise be forgotten,” says board president Jay Albert.

“We are committed to teaching people to see this as a natural journey, and this is a place to take that journey along with your friends and loved ones,” says board member Nancy Lynn. Part of that community education involves participating in special course on caring for those approaching death. “A lot of people come to the class, it’s not just caregivers but folks who think they might become caregivers at some point and people who have lost someone and want to understand more,” says Sunday.

Sarah House, which doesn’t receive funding from Medicare or Medi-Cal, raises about half a million dollars each year from private sources, individuals, foundations, and special events in order to provide all of its services at low or no cost to residents. The annual events–which include Light Up the Night, an annual holiday party where gorgeous holiday trees designed by local artists and celebrities are auctioned off; an Oscar Party, which celebrates the Academy Awards; and Second Seating Dinner Parties, where members of the community are invited to Sarah House to sit among the residents and learn about the program, among others–are designed not only to raise money but also to help educate people about the organization. “You have to have fun,” says Kilpatrick-Weinberg. “And it’s not making light of the situation. Sarah House is not about dying, it’s about celebrating and living your life right to the very end.”

For Sarah House’s annual holiday fundraiser–“Light Up The Night: The Artizan’s Ball”–on December 8 at the Santa Barbara Women’s Club, dress as your favorite artist or work of art and enjoying live music and special cocktails such as Cosmo Van Gogh. The Oak Group artists will be creating paintings on the spot, to be auctioned off, and many other unique works of art will be available for purchase, along with the traditional holiday trees, designed by local artists and celebrities. Tickets: $100 suggested donation. For more information, call 882-1192 or visit sarahhousesb.org.