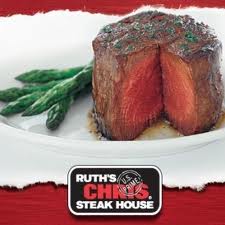 I got quite a meaty education the other night, when I sat in on an employee training session and menu sampling for the new Ruth’s Chris Steak House in La Cumbre Plaza, which officially opens on Monday, November 19.

If the attention to detail in the training session–conducted by the Irvine restaurant’s general manager Todd Lounsberry, who will serve as a mentor to Santa Barbara’s general manager Chris Goodyear–is any indication, Santa Barbara diners are in for a level of service they haven’t exactly come to expect in our local establishments. Let’s face it: most restaurants here are better known for the beauty of their surroundings and the quality of their food than they are for having staff who go out of their way to make you feel welcome.

With just under 300 seats, the new Ruth Chris Steak House will have to attract a lot of steak lovers to recoup its investment in this location–even at $36.95 for an a la carte filet. A company spokeswoman declined to answer my question about how much was spent on the restaurant build out, but the interiors are lovely, with no expense visibly spared on the heated outdoor patio, roomy bar area, indoor/outdoor fireplaces, two wine cellars (which can be reserved for intimate dinners) and expansive dining room. There also three private rooms, which can be combined to hold about 70 guests, as well as Ruth’s Library, a boardroom type setting that can be used for special events.

Despite the hefty investment and the La Cumbre Plaza location, I wouldn’t bet against Ruth Chris’s record of success. Clearly the company knows something about capturing carnivore customers. Since its 1965 founding in New Orleans by Ruth Fertel (who passed away in 2002), they’ve opened 114 locations worldwide, including Canada, Mexico, Hong Kong, Taiwan, Japan, and now, Santa Barbara.

The excitement level at the training session was palpable, probably in part because the approximately four dozen hosts, servers (who must have a year of fine dining experience), server’s assistants and bar tenders were honored to have been selected out of the more than 500 people who interviewed for their jobs, according to Ruth Chris PR Maven Lanette Jarvis.

The staff was transfixed as Lounsberry showed off various cuts of meat in their raw state and reviewed a gigantic stack of product information cards, including facts about how Ruth Chris buys its meat (“from cows that are fed only corn, which results in richer more flavorful taste”), how the steaks are cooked (“seared at 1,800 degrees, then seasoned with sea salt, black pepper and a touch of parsley, and topped with fresh butter that sizzles on your plate”), and how they’re served (“on a 500 degree plate,” they recited in unison).

According to Lounsberry, all of the meat served at any Ruth Chris Steakhouse (with the exception of the Filets, which aren’t always available in the U.S.) is rated USDA Prime, which means it falls in the top two percent of graded meat. “Ruth Chris takes up almost half of the prime meat available in the U.S. for its restaurants.”

In addition to Filets, those cuts of beef include a Porterhouse (“it has to be a minimum of one and a half inches thick in order to be a Porterhouse”), a Ribeye, a Cowboy Ribeye (includes a bone), a T-Bone, and a New York Strip (“it has that name because it’s shaped like New York”). Seafood, lamb, pork and poultry are also available, but steak is definitely king on this menu.

We tasted bites of the Filet, the New York Strip, the Porterhouse and the Ribeye, each one more mouth-wateringly delicious than the last. “We want our guest to leave Ruth Chris Steak House as raving fans,” said Lounsberry.