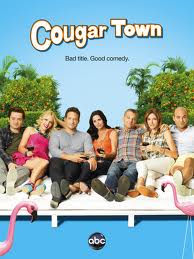 Watching “Cougar Town” makes me feel dirty-and not in a good way. I really wanted to like this show. Despite the high concept potential for disaster, when I heard about it I had high hopes. The star, Courtney Cox, was my third favorite “Friends” actress and her last series, the short-lived “Dirt,” was delightfully trashy. I figured “Cougar Town” would be more of the same.

Besides, clearly this show and I were made for each other. I’m over 40 and I’m married to a hot younger man, so I should be able to relate, right?

Of course being a 40-something woman in real life means juggling work between laundry loads, driving car pool, supervising homework, and putting away groceries. I still go out to bars occasionally, but mainly with girlfriends, and I can’t remember the last time I wore three-inch heels, let alone recall how to walk in them. But on TV the 40-something women-whether judges, detectives, game show contestants or in the case of Cox’s “Cougar Town” character, real estate agents-all have one thing in common: they’re on the prowl for hot, lusty sex with ripped guys only a few years older than their children.

Not that there’s anything wrong with this.

When I see an obviously older woman with a younger guy-and can safely rule out the idea that he’s her son-I usually think “more power to her.” Or, if I’ve had enough cocktails and there’s 80s music playing, “you go girl.”

I also don’t automatically assume the guy’s a himbo, just because he’s young.

Six-pack abs are great, but intelligent conversation is a must, as is a sense of humor, and the second two don’t necessarily fall exclusively in the province of people born before the Reagan administration. Unlike a lot of men, who are happy to be in the company of women who simply look pretty and have absolutely nothing of interest to say, I don’t know a lot of women who aren’t interested in talking, both before and after sex.

According to author Valerie Gibson’s “Cougar: A Guide for Older Women Dating Younger Men,” “a cougar is the new breed of single, older woman-confident, sophisticated, desirable, and sexy. She knows exactly what she wants. What she doesn’t want is children, cohabitation, or commitment.”

That I can understand.

I love being married, but if anything ever happened to my husband, getting another one wouldn’t be high on my list of priorities.

Boy was I disappointed.

Instead “Cougar Town” makes turning 40 look like a life sentence at a sadistic day spa where your life is all about nipping, tucking and sucking it in. Rather than simply enjoying being who she is, Cox’s character is constantly commenting on how old she is, how pretty she used to be and how uncomfortable she is in her own skin.

“If aliens learned about our culture by watching our newest television shows, they might assume that planet Earth was terrorized by predatory middle-aged women with hairless, bony bodies and the same blank expression on their overly Botoxed faces, a look of creepy awe at the joys of 20-something tenderloin,” wrote Heather Havrilesky in Salon.

This is just the opposite of the vast majority of 40-something women that I know.

Getting older is about knowing who you are, and finally, finally, FINALLY being comfortable in your own skin-no matter how wrinkled it may be. Unfortunately the writers of this show-who are mostly middle-aged men-just don’t get that.

When Leslie isn’t trying to find something worth watching on TV, she can be reached at Leslie@LeslieDinaberg.com. For more columns visit www.LeslieDinaberg.com.  Originally published in the Santa Barbara Daily Sound on October 30, 2009.