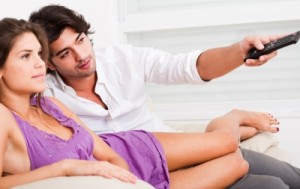 My son snatched the remote control out of my hands with the same vehemence I might have for rescuing the very last Dark Chocolate Bordeaux in a box of See’s Candy, and I said to myself–for the zillionth time this week–“Oh my God. I really don’t understand men.”

What could possibly be so enticing about controlling that remote control? I thought we had already picked a show. Why did he need to be holding the remote?

I couldn’t figure it out. Was it the power control aspect of being able to pause the show or control the volume at will? Or was it the “ooh, look at all the pretty buttons” technology gadget aspect that makes it so appealing? I had no idea.

My son was too busy furiously flipping through channels–while watching Boy Meets Grill in the picture in picture screen–to be of any help.

If sitcoms–and now reality TV–are any indication of reality, then it’s pretty obvious that men like to be in control. Things like asking for directions, going to the doctor, or getting professional help to fix a leak in the kitchen sink are seen as signs of weakness, as well as comedic gold mines.

That’s probably why my Dad is so enamored with his GPS navigation system. It gives him help without his having to ask for it. So what if it directs him to the house next door, and he follows those directions instead of turning into his own driveway? It’s all about the illusion of power, and the cool remote control gadgety thingee, of course.

Plus, with GPS, no one–except a computerized voice, which apparently doesn’t count– is telling you what to do. At least that seems to be Dad’s logic.

My husband seems to be a pretty typical member of his species in that he HATES when I tell him what to do. It doesn’t matter what it is. A burning Ferrari could be falling from the sky about to hit him on the head, and he’d be annoyed if I told him to watch out.

He might even be planning to do exactly what I tell him to do, (“You should duck, a burning sports car is about to hit you!”) and he would still hate me telling him what to do, maybe even more because he was already planning to duck and I should have realized that.

It’s the oddest thing. As soon as the words, “You should …” or “Would you …” or “Could you …” start to come out of my mouth, he becomes a rebellious teenager and I become his nagging mother. This is not one of those fun role-playing games at all. Plus, he refuses to do whatever I’m asking him to do on principle. It doesn’t matter if it was something he wanted to do or not, the point is that I’m asking him and therefore taking control away from him and violating his free will, and I may well just cut off his manhood right then and there. I guess.

The two of them are usually as full of MANswers as they are of gas, but not today. When I ask them about their need to hold on to the remote control, they both shrug their shoulders and grab for it immediately.

“Not so fast, boy,” says my husband with a “get the hell out of Dodge” tone to his voice. My son relents control of the remote immediately. I’m still baffled.

Later that night, after much persuading, I finally get my answer.

It turns out that while I was busy delivering Koss, Zak called out “Dibs for Life” on the remote control in the hospital room. Aww, how sweet, he still remembers his first words to his newborn son.

Unfortunately, now I sort of understand.

Originally published in the Santa Barbara Daily Sound on July 25, 2008.