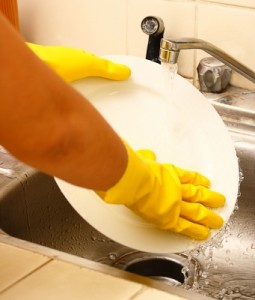 I’m writing this column to start fights between husbands and wives, at least that’s what the husband of one of my friends claimed. An informal survey of friends verified what social science research confirmed about what goes on in the average American home. Any way you measure it, very little has changed in the roles of men and women–there’s no such thing as “halving it all,” women still do about twice as much around the house as men.

Of course that ratio used to be four to one (and that was pre-microwave ovens), so we are making some progress. According to a recent article in the New York Times, no matter how you construct and deconstruct a family, “Working class, middle class, upper class, it stays at two to one,” says Sampson Lee Blair, an associate professor of sociology at the University at Buffalo who studies the division of labor in families.

Even in households like mine, with extremely low housekeeping standards, the ratio is about two to one. I do a little and my husband does very, very little. So little, in fact, that rather than take part in my informal survey and account for his chores like all the rest of our friends did, he had the bad sense to say, “I’m quite sure that I do everything while you eat bonbons.”

OK, I admit that I may fortify myself with the occasional chocolate, but it’s just to make sure I have the energy to keep the refrigerator, pantry, gift closet and sock drawers filled with enough supplies to brave those Santa Barbara winters.

Since research has found that the best predictor of the division of labor is how it breaks down amongst your friends, I decided to dig in for some details from mine.

I’m not sure what it says about my voyeuristic tendencies, but I found it oddly interesting to hear about who did what around my friends’ houses. You would think they were sharing Penthouse letters, the way I ran to check my computer every time my email chimed in with a new message. I couldn’t wait to see who was weighing in with their chore score.

In general, guys seemed to have a few areas of expertise, mostly car maintenance and yard work, while the house and the social life fell into the wife’s wheelhouse.

Having titles isn’t a bad idea. Almost everyone I talked to admitted to bickering with their spouse about housework–or knowing they’d just get in a fight if they brought it up–which is why, in the interest of domestic harmony, all the names in this story were changed.

Kids were the biggest area of shared responsibility. Although we seem to follow our parents in many regards, this generation of fathers is definitely not second-class parents to their wives. Sure, there are exceptions, like Amanda who said, “Pete needs a manual to operate the children. When given specific instructions, he is usually able to follow them. … He is allergic to the children’s belongings and couldn’t possibly put them away.”

But most of the responses were more along the lines of: “Ernie supervises the kids homework (I gave up math in second grade), takes them to all of their sports activities, and makes sure their teeth don’t rot.” Or “Doug picks up the kids from school every day, and is almost always the one to stay home with them when they’re sick.”

Cooking also didn’t fall under one gender or the other, although I’m convinced that our friends play a big part in the fact that Americans now spend $26 billion more each year on restaurants than grocery stores. As Kathy said, “Joe does about 25% of the cooking, I do about 25%, and someone else does the other 50%.”

Author Neil Chetnik, who interviewed about 300 husbands for his book, VoiceMale–What Husbands Really Think About Their Marriages, Their Wives, Sex, Housework and Commitment, found that almost every level of happiness and positive feelings in relationships is related to housework. “I kept seeing the parallel between housework and sex in the interviews. Men said the happier their wives were in the division of housework, the happier the men were with their sex lives. We even looked at the numbers and found that there’s more sex in the relationship if the wife is happy with the division of housework.”

Did you hear that, honey? Might be time to work on improving your chore score.

What’s the chore score at your house? Share your stats with email. For more columns visit www.LeslieDinaberg.com.

Originally published in the Santa Barbara Daily Sound on June 27, 2008.