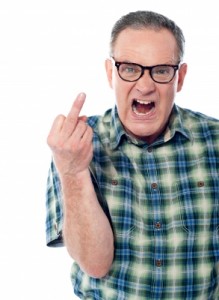 The curse of language arts

My 42-year-old husband swears his parents have never heard him swear.

I wish my 9-year-old could make that claim.

I don’t where it came from. He certainly didn’t get it from me. My expletives tend to be a lot more colorful.

He didn’t get it from his father, who saves his swearing for his own generation (although it’s mostly regarding another generation).

Even the Cartoon Network doesn’t use that particular phrase.

Koss, on the other hand, weaves it loudly into conversation at every opportunity. On a recent Sunday we went for his and hers cheap haircuts at Fantastic Sam’s. The place was crowded with families on their way home from church. We sat side by side as our locks were chopped. I smiled proudly at my well-behaved little angel. He beamed back at me and said, in his loudest voice, “Oh Jesus, Mom, look at all that hair on the floor.”

I hope the 12 sets of eyes that turned to stare at me were praying for my hair and not my soul.

And if you were one of those people in the store, and you were praying for my hair, could you ask for some natural highlights in a color other than gray?

How do you explain to a kid that some people get pretty offended when you take a certain someone’s name in vain?

I’m sure it was just coincidental that a few days later my package of art supplies from Thailand had been opened and inspected by the Office of Homeland Security. And I’m sure those little clicks on my telephone line were just static.

The Cuss Control Patrol is a force to be reckoned with these days. I read about a Michigan man who faced a possible jail term of up to 90 days and a $100 fine for swearing in front of children, after he was dumped from his canoe. Thank goodness they weren’t around when I slammed my finger in the car door.

Unless you’re on TV or in the movies, swearing these days requires a certain stealth.

I try not to encourage her by laughing, but I can’t help but admire her subversive skill.

Apparently we have a subversive family.

A few years ago, my son and his father collaborated on a book about the evil adventures of Mr. Dr. Big. When Koss returned to school and proudly shared the creation with his kindergarten class, his teacher changed “they kicked his butt” to “they kicked his tushie” before reading it aloud.

I guess my Offend-o-Meter needs a tune up.

The writer in me knows that superheroes don’t kick tushie, they kick butt. But apparently the mom in me should know better.

Even if I can get past the somewhat distasteful idea of deciding on a list of unacceptable words for my child’s ever-expanding vocabulary, and stop myself from swearing in his presence, I still have another huge challenge ahead – keeping a straight face.

Sure, children swearing can be embarrassing, but it can also be downright hysterical. Some of the biggest laughs in “Meet the Fockers,” come from the baby’s first word, “*%^hole.” And I’ll never forget the litany of swear words coming out of my friend Ari Echt, when he was only 2. His vocabulary could rival a truck driver’s, and his gravelly voice made it all the more amusing.

So I think I understand the distinction. It’s funny when other kids do it, but it’s not funny when your kid does it.

Especially when Grandma’s around.

Or at a birthday party last weekend, for example.

I giggle to myself and then remember, I’m a mom and I’m obligated to turn the Offend-o-Meter up a notch.