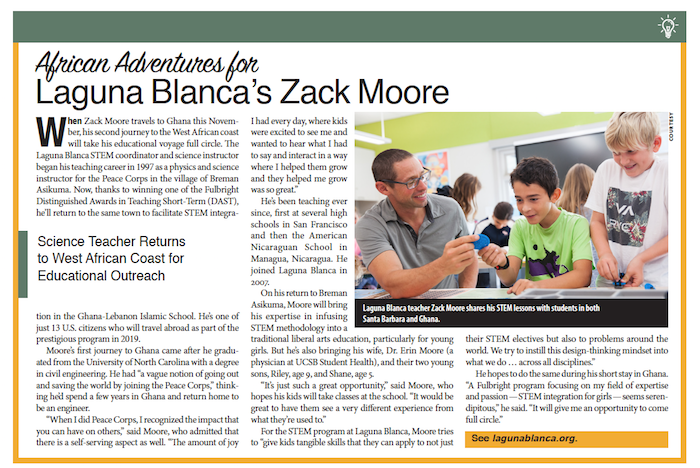 When Zack Moore travels to Ghana this November, his second journey to the West African coast will take his educational voyage full circle. The Laguna Blanca STEM coordinator and science instructor began his teaching career in 1997 as a physics and science instructor for the Peace Corps in the village of Breman Asikuma. Now, thanks to winning one of the Fulbright Distinguished Awards in Teaching Short-Term (DAST), he’ll return to the same town to facilitate STEM integration in the Ghana-Lebanon Islamic School. He’s one of just 13 U.S. citizens who will travel abroad as part of the prestigious program in 2019.

Moore’s first journey to Ghana came after he graduated from the University of North Carolina with a degree in civil engineering. He had “a vague notion of going out and saving the world by joining the Peace Corps,” thinking he’d spend a few years in Ghana and return home to be an engineer.

“When I did Peace Corps, I recognized the impact that you can have on others,” said Moore, who admitted that there is a self-serving aspect as well. “The amount of joy I had every day, where kids were excited to see me and wanted to hear what I had to say and interact in a way where I helped them grow and they helped me grow was so great.”

He’s been teaching ever since, first at several high schools in San Francisco and then the American Nicaraguan School in Managua, Nicaragua. He joined Laguna Blanca in 2007.

On his return to Breman Asikuma, Moore will bring his expertise in infusing STEM methodology into a traditional liberal arts education, particularly for young girls. But he’s also bringing his wife, Dr. Erin Moore (a physician at UCSB Student Health), and their two young sons, Riley, age 9, and Shane, age 5.

“It’s just such a great opportunity,” said Moore, who hopes his kids will take classes at the school. “It would be great to have them see a very different experience from what they’re used to.”

For the STEM program at Laguna Blanca, Moore tries to “give kids tangible skills that they can apply to not just their STEM electives but also to problems around the world. We try to instill this design-thinking mindset into what we do … across all disciplines.”

He hopes to do the same during his short stay in Ghana. “A Fulbright program focusing on my field of expertise and passion — STEM integration for girls — seems serendipitous,” he said. “It will give me an opportunity to come full circle.”