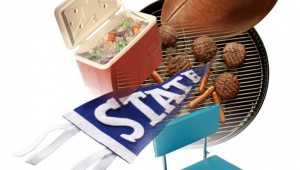 Though the air in Santa Barbara feels more like Indian Summer than fall,  football season is upon us, which means it’s tailgate time. Toast the kickoff with these Super (punch) Bowl worthy libations:

On Bruin game days, we had beer for breakfast; it was cold, cheap  and oh so collegiate … so imagine my surprise when I went to my first tailgate party at Cal and found out about their Ramos Fizz breakfast tradition. This is not just any old mixed drink either, as Esquire‘s expert cocktail historian David Wondrich writes, “It’s fussy, dated, takes a long time to make and uses too many ingredients, one quite hard to find (orange flower water). It’s not an everyday drink, yet you can’t mix it up in big batches for company (nor should you order one in a bar). You’ve got to make these babies yourself, one or two at a time. So why bother?”

I’ll tell you why. Because they’re delicious (particularly before noon). Here’s a great recipe from Williams-Somona. And by the way, orange flower water is now quite easily found at places like Lazy Acres, Whole Foods, Trader Joe’s and BevMo.

There’s an art to tailgating: when you start drinking cocktails in the morning, it’s all about the timing. You don’t want to nap your way through the game, after all. Luckily, the folks at Bendistillery have come up with Pez, combining their delicious, smooth Crater Lake Vodka with a jolt of Red Bull in case you need an afternoon kick before the kick off.

Though I have neither a green thumb nor an NRA card, I am a big fan of the recipes in Garden & Gun Magazine. They’ve got a terrific collection of Tailgate Cocktails in the current issue, including the swoon-worthy Tallulah, combining the classic southern flavors of whiskey, coke and peanuts. Go team!

Of course, the beer gene runs strong in many football fans, so if these recipes seem a little too complicated for a tailgate party, there’s always Beer Punch. Here’s a great recipe from the Food Network‘s Sunny Anderson.

And finally, whatever you drink, half the fun is in the presentation. Here’s great video from Blue Plate’s Mixologist, Dan Scheuring using adorable—and portable— mason jars for a variety of tailgate cocktails.