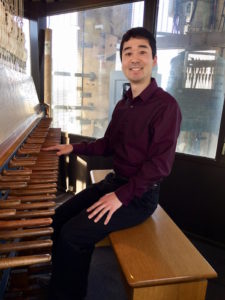 From a small space atop Storke Tower, the music Wesley Arai creates on a 61-bell carillon rings out across the UC Santa Barbara campus.

Audiences will be treated to a special program Sunday, Aug. 25, when Arai, the university carillonist, gives a recital as part of series celebrating the 50th anniversary of Storke Tower. Free and open to the public, the concert begins at 2 p.m. Listeners are encouraged to bring blankets or lawn chairs to sit on the grass beneath the tower.

“I realize that most people aren’t familiar with the carillon, so I try to make my recitals accessible and varied,” said Arai, who also oversees the maintenance of the instrument and organizes guest carillon recitals as part of his duties. The summer concert will include well-known classical music, popular songs and some music written specifically for the carillon. As a tribute to the 50th anniversary, Arai said, “I’ve been trying to also include music that is significant to the university and its carillon. Going with that theme, the concert will likely include some music written for the campus carillon, music written by past university carillonists and school songs.”

Arai, also a lecturer in the Department of Music, has performed extensively across the United States and abroad. He has recently performed in Australia, at the Eighth Berkeley Carillon Festival, at the Springfield International Carillon Festival and at the Congress of the Guild of Carillonneurs in North America, which this year took place in Lake Wales, Florida. In addition, he gave the dedicatory recital for the carillon at the University of Washington. Arai also performs annually at the Cathedral of St. John the Evangelist in Spokane, Washington.

In addition to the carillon, Arai has studied piano, trombone and voice, and has performed in a variety of concert bands, marching bands, jazz bands, orchestras and choral groups. He also enjoys arranging music and occasionally performs some of his own arrangements on the carillon.

An alumnus of UC Berkeley, where he received bachelor’s degrees in mathematics and in statistics, Arai discovered the carillon as an undergraduate student. “I would hear the bells all the time while walking to class,” he said, “and I heard there was a class to learn how to play — so I signed up and have been playing ever since.”

Enthusiastic to share his passion and skill, Arai invites UC Santa Barbara students interested in learning to play the Storke Tower carillon to email him at warai at gmail dot com to schedule a piano audition. Enrollment is limited to three students per quarter.

Storke Tower and its carillon were a gift from Thomas More Storke, former publisher of the Santa Barbara News-Press. The instrument consists of 61 bells cast by Petit & Fritsen of the Netherlands, with the bells weighing from 18 pounds to 2.5 tons and spanning five octaves. The carillon at UC Santa Barbara is a much larger modern copy of historical instruments that were invented approximately 500 years ago in the Low Countries of Europe. Then, tower bells were used to signal time, much like a clock chime, and as a means of additional notifications (e.g. an enemy is approaching) and directives, such as to close the city gates or go to church.

Eventually, the number of bells was increased and they were connected to a keyboard to facilitate the performance of music. A melody was often played to attract the attention of the townspeople before the hour bell tolled the time throughout the day. A carillon is played with the fists and feet, and the action is completely mechanical. To vary the dynamics of the music, the performer must strike the key harder or use a lighter touch, much like a piano.