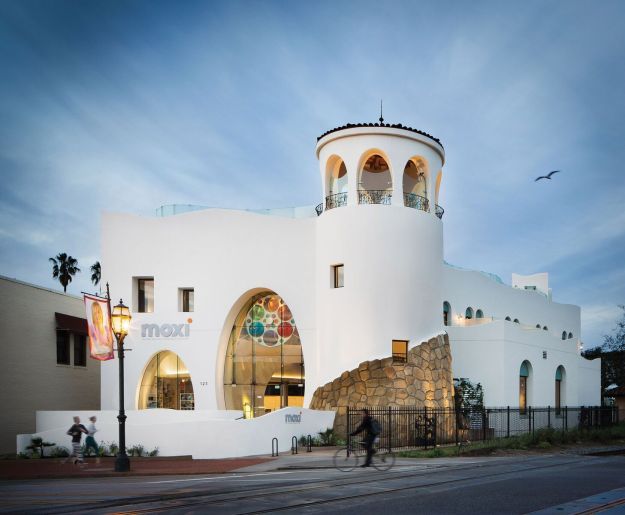 MOXI is located at 125 State Street adjacent to the popular Funk Zone neighborhood and just two blocks up from Stearns Wharf and the beach. The building was designed by the late Barry Berkus and AB Design Studio and is LEED Gold Certified. Photo courtesy MOXI.

It has been a really incredible first year for MOXI … and we’ve just gotten started,” says Robin Gose, president and CEO. Gose began her tenure at MOXI late last year, after serving as director of education at the Thinkery in Austin, TX, where she oversaw all programming, exhibits and facilities at what was once Austin Children’s Museum.

MOXI’s attendance its first year has far exceeded expectations (175,000 guests versus approximately 120,000 estimated) and Gose says, “Attendance continues to be strong. The feedback that we’re hearing from members of the community, from donors, from tourists that come up, is that everybody is really excited by what they see at the museum.”

MOXI specializes in STEAM (Science-Technology-Engineering-Art-Math) learning through interactive experiences outside the traditional classroom environment. Because of the interactive elements, and individual children’s continued growth and development,

MOXI is designed so that it will be different each time you visit, with new challenges to solve and new discoveries to uncover throughout the 17,000 square-feet of interactive exhibits across three floors (including an incredible 360 degree view rooftop).

The award-winning, LEED gold certified building—which had the design challenge of fitting into the Spanish style neighborhood while creating both a high tech and kid-friendly vibe and was designed by the late Barry Berkus + AB Design Studio—has played an important role in the revitalization of lower State Street as a destination for both tourists and locals.

“We have about 75% local, and 25% non-local visitors,” says Gose, adding that school visits include many students from Santa Barbara County, as well as Ventura County, San Luis Obispo County and beyond. Last year, 10,000 school children visited MOXI on field trips, and nearly 50% were from Title I schools.

Adults are also big fans of the venue. MOXI’s quarterly Afterparty events have all been sell-out affairs, and include live entertainment, demonstrations, games and local food and cocktails. Also popular are the pop- up Twilight Time evening hours for guests 18 and up who want to explore the museum kids-free. These are advertised primarily via social media, Gose says. The theme for 2018 is “Making,” with monthly spotlights on subjects like cardboard engineering and digital creativity.

These themes extend to summer camp activities, as well as new weekly projects in the Innovation Workshop makerspace. Also new are an exhibit design partnership with the Dos Pueblos High School Engineering Academy and Toddler Tuesdays, a volunteer-run program where the youngest guests can have special story time and other activities and explore the exhibits without visiting school groups onsite.

With 44 full and part-time staff and nearly 100 volunteers, ranging in age from 13 to 75 years old, MOXI has quickly become an important part of the community. In fact, earlier this year the museum provided alternative classroom space to Montecito students and teachers displaced by disaster and opened its doors free of charge to Thomas Fire and Montecito mudflow evacuees as well as first responders and their families.

Upcoming fundraising events for the nonprofit museum include an intimate rooftop concert with Jackson Browne on August 10 and the annual gala fundraiser MOXI@Night on September 22. For information or to purchase tickets, email development@moxi.org or call 805/770-5003.

This story was originally published in the 2018 summer issue of Santa Barbara Seasons Magazine.

Community Cocktail for a Cause: Glitz, Glam & Get Down

Their New Year’s festivities may have been cancelled, but the show must go on, so The Kimpton Canary Hotel with Finch & Fork Restaurant are hosting a 2018 Community Cocktail for a Cause: Glitz, Glam & Get Down with DJ Darla Bea (winner of “Best Event DJ” for 2016 and 2017) getting everyone out on the dance floor.

“Let’s celebrate and welcome in 2018, and help provide support to those affected in the community by the Thomas Fire,” say the organizers.

The rooftop party will be on January 20, from  7-11 p.m., with a portion of proceeds benefiting United Way of Santa Barbara.

2018 Community Cocktail for a Cause: Glitz, Glam & Get Down at the Canary, courtesy photo.

There will also be a community cocktail competition featuring popular local cocktail bar competitors, with the winner giving raffle proceeds to the charity of their choice, benefitting Thomas Fire affected community members.

Tickets for the cocktail party are $120 amount with a portion of proceeds to United Way of Santa Barbara. That includes sweet treats from Finch & Fork Restaurant, an end of night champagne toast to the community, and a cash bar.