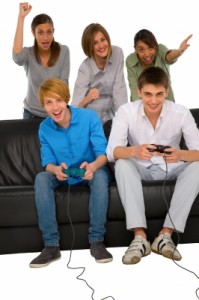 How do you raise a boy to be in touch with his sensitive side, but not to be a wimp?

I’ve been thinking about this question a lot recently.

I just returned from a few days at “Testosterone Central,” otherwise known as my friend Andrea’s house. She has three strapping young men between the ages of 9 and 15-in addition to her rather strapping husband and large male dog-so Andrea’s house oozes more testosterone than a bachelor party at a NASCAR race on St. Patrick’s Day.

Now don’t get me wrong. It’s beautifully decorated and there’s always something wonderful cooking on the stove. But from the moment you get out of the car-and trip over the discarded scooters, soccer cleats, gym bags and tennis shoes-you know that this is not a place for wimps.

These boys live in a swirling cauldron of testosterone and they’ve marked their territory everywhere you look.

Of course, my son Koss loves it there. What boy could resist the chin up bars, Lacrosse sticks and Old Spice products hiding in every corner? I can practically hear Koss’s voice deepen and the hair start to grow on his (barely) ten-year-old chest after a few minutes with “Da Boyz.” It doesn’t matter how much time has gone by, it never takes him long to pick up the stride at “Testosterone Central.” The older kids, and the various neighbor boys who hang out all the time, treat Koss just like another little brother—which is both good and bad.

He loves being part of the gang and tagging along for whatever adventures may happen, but as an only child he’s not used to having to keep up with anyone, and even less used to not having anyone coddle him or help him along. In fact, I know he’s getting older because this is the first time he’s left their house without any injuries.

I’m not saying that “Testosterone Central” is dangerous, only that Andrea is on a first name basis with the emergency room nurses in multiple states. Those kids get hurt and she barely blinks an eye. I guess having three sons toughens you up. Come to think of it, when her kids get hurt they barely blink an eye. I guess having brothers toughens you up too.

Koss is not all that tough. He’s never really had to be. I’m sure part of the reason that he still sits on my lap and likes to cuddle is because he doesn’t have any older brothers to tell him not to. I love that sweet, cuddly side of him.

But he also loves to immerse himself in that boy energy at “Testosterone Central.” It’s not exactly animal house, but you can tell that it would easily slip into fraternity style mayhem if mom-and the housekeeper-went away for an extended period of time. No wonder Koss loves it there.

He’s spent a lot of the summer hanging out with his girl cousins, and was completely comfortable being assigned to an all girl group (plus one male counselor) at Nature Camp. I don’t think the boys who live in “Testosterone Central” would be-except maybe the oldest one, who’s got a whole other level of testosterone kicking in.

I asked Koss about whether he felt he behaved differently with all boys or all girls. “When I’m with the boys I definitely feel more aggressive with them,” he said. “I try to be funnier with the girls.”

That’s when I realized that I didn’t have to be too worried about him one way or the other. He already knows exactly how to behave with both boys and with girls. If he can make the girls laugh and then go tackle the boys-and as long as he knows the right ones to cry in front of-he’s going to be just fine.