Founded in 2018 by a who’s who of veteran Santa Barbara tech operators, entrepreneurs, and investors, Entrada Ventures focuses on early investments that help start-ups develop into strong businesses ready for their first round of institutional financing. The firm and its team’s list of affiliations include ACT (Medtronic), Apeel Sciences, Aurrion (Juniper), CallWave, Invoca, Local Market Launch, SmartReceipt (Mobivity), Software.com, ValueClick (Conversant), and Web Ignite, among others.

Entrada was started under the principle that there was not much investor support in Santa Barbara. “There’s money but not a lot of support about how to navigate fundraising, building a company, operations, financials, marketing, and all of that,” explained Julie Henley McNamara, Entrada’s operating partner and a Cal Poly grad.

“We want to give money but also be helpful to the community with our portfolio of companies. It’s all about the 805.”

When business is not restricted by COVID, the VC fund team holds regular office hours at UCSB, Cal Poly, and the downtown Kiva Cowork space. “Julie is really the inspiration behind some of this,” said managing partner Jason Spievak. “We want to make that capital conversation more accessible to small businesses here in the region.”

They aren’t necessarily looking for proper pitches, just an introduction. “The office hours are also a way to put less pressure on young people if they just want to talk.”

Once Entrada invests, the collaboration is geared to the need. That ranges from becoming part of the board and meeting weekly to a much less active role. “It really kind of depends on the company,” said McNamara. “The way we like to work with them is to be as helpful as we can but not be interfering and not be intrusive.” And if she’s the interface but the need is something she cannot provide, McNamara can call on one of her partners or search through her extensive network to find the right solution. 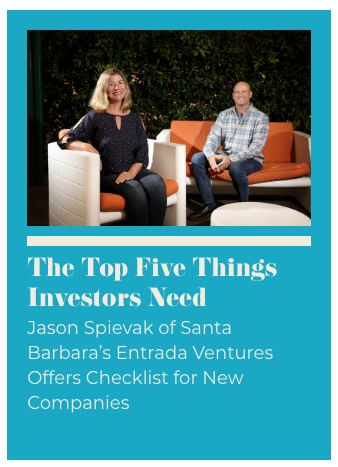 With a career as an investor and founder spanning three decades and a broad range of technologies from agricultural sciences to virtual reality, Entrada Ventures cofounder Jason Spievak believes these five things are critical for attracting investors.

1 INTEGRITY “There’s some core criteria that we look for, and job one is integrity, far and away. Because if you can’t trust someone, you can’t rely on them and you can’t work with them, so that is absolutely binary. There is no wiggle room on what I call situational ethics.”

2 THE RIGHT FIT “Does this person have the skill and the experience to do the thing that they need to do to succeed in their role? Are they actually the right person for the job, so to speak, in terms of skills, experience, and aptitude?”

3 A WINNING MINDSET “We all, unfortunately, know people who were raised from childhood to believe that success happens to other people and it’s their job to get the ball to the one-yard line and toil away in anonymity while somebody else makes it happen. We really want to invest in folks that believe that they deserve success.”

4 SOMETHING TO PROVE “It’s a little bit esoteric, but do they have something to prove? You want to bet on someone — I don’t care if you’re proving it to your mom, your dad, your teacher who gave you a B, your coach who didn’t start you, your boyfriend who broke up with you. Who feels like they have something to prove? They work really, really hard. And they work hard when no one’s watching.”

5 CHEMISTRY “Would you want to sit next to this person on an airplane for six hours? The only guarantee is you’re going to spend a heck of a lot of time together when you invest in someone’s company, and as a result, you want to enjoy that time. You want to be learning; you want to look forward to that time together and not roll your eyes when you see their name on the phone, so it’s pretty important. People talk about investing in someone’s company as being like a marriage. It’s more than marriage in a way because you can’t get divorced.”

BONUS POINTS: PROVEN TRACK RECORD “There’s absolutely an overwhelming amount of evidence out there that shows that founders who build and successfully exit a company are more likely to do it again. So a proven track record is ideal. However, when you’re doing early-stage investing, as we like to do here in the region, it’s often the case that this is the first company for these founders; otherwise, they would not necessarily be seeking early-stage capital—they would have it already.”

As Santa Barbara’s tech sector continues to grow and evolve, so do the challenges and opportunities presented here. I asked a bunch of industry leaders for their observations, and what follows is a snapshot of what’s going on today.

ATTRACTING TALENT IS EASIER: A common complaint is that it’s hard to attract employees here compared to larger markets like Silicon Valley. “There’s a little bit of truth to that—you generally have a bigger pool—but you also don’t have the extreme competition and somewhat lack of loyalty of employees in that market,” said Elizabeth Cholawsky, president and CEO of HG Insights. “There’s a lot more turnover of employees in the Bay Area.”

As the former CEO of the Sunnyvale-based Support.com, Cholawsky said the challenges of attracting top talent are offset by advantages. “It is a small community, so people that aren’t at the top of their game often don’t survive in Santa Barbara because everybody knows everybody and experiences get shared pretty openly,” she said. “The cream of the crop rises in Santa Barbara because a lot of people want to stay here because it’s such a beautiful place to live. So you do your best to do your best, and if you’re not, it gets weeded out by the fact that we’ve got a tight-knit community.”

Others appreciate that advantage as well. “Santa Barbara is very underrated in terms of its ability to offer a challenging and a healthy tech environment, maybe without some of the rat-race elements that Silicon Valley has become,” said Mike Muench, CEO and president of Seek Thermal, who worked in Silicon Valley while a VP for Apple. “I’ve talked to a number of transplants from Silicon Valley at the executive or professional level, and, almost without exception, they’ve felt the same way: Why didn’t I do this 10 years ago? This still gives me all the technical and professional challenges that I need, but from a lifestyle tradeoff, it’s a lot more balanced and healthy.”

LONGER TENURES: “People who join the company tend to stay in the company longer, which is nice,” said ParentSquare cofounder Anupama Vaid. “In the Bay Area, the churn is so high.”

Having been a VP of the Leaf Group in Santa Monica, Entrada Ventures’ operating partner Julie Henley McNamara agrees. “There’s a real sense of loyalty here,” she said. “You’re not stressed when you get to the office because there wasn’t a lot of rigmarole to get there. From Carpinteria to Goleta, there is traffic, but nothing like the Bay Area or L.A.”

WORK-LIFE BALANCE: “Santa Barbara, especially in the day and age of COVID, offers a great quality of life and a growing, thriving, tight-knit community,” said Amy Meyer, Chief People Officer at AppFolio. “There are a lot of interconnections, just a couple degrees of separation, and the Santa Barbara community has a lot to offer. We also do a lot of work in the community—giving back through our employee driven give-back program.”

ParentSquare’s employees have access to Gold’s Gym just downstairs, explained Vaid, “and our Christmas parties and our annual get-togethers are always something outdoorsy.”

Nathan Ziv of Invoca said that their employees did a lot of team hikes prior to COVID, and that he often will take an employee out for a one-on-one meeting by walking to Stearns Wharf, just a few blocks from their office at the bottom of State Street. “When surf is good, go take a longer lunch and get in the water and then come back,” he said. “After that, you can do meetings and whatnot. I don’t think you can do that as easily in a big city.”

COMMUNITY COLLABORATION: The tech community’s interconnectedness is in part due to its relatively small size, but there’s also a concerted effort on the part of leaders to work together.

As the COVID pandemic began, Meyer from AppFolio helped create a forum for HR leaders in the tri-county area. “There’s about 15 to 20 of us from various tech companies that meet every couple of weeks, specifically to share best practices and what’s working and what’s not in navigating COVID and how to support employees through that,” she said.

Henry Ventura, who manages diversity, inclusion, and equal employment for the County of Santa Barbara, is spearheading a Diversity Roundtable coalition with a diverse group of companies. That includes leaders from Amazon’s Alexa branch on State Street, MarBorg, Deckers Brands, Just Communities, Invoca, Sonos, and Procore, among others, to promote equitable practices in the workplace.

COST OF HOUSING: The cost of living is “definitely a challenge,” said Meyer. “In light of living in a pandemic, people are now more than ever choosing where they want to live and having more flexibility. It’s going to get easier in some respects to recruit and to attract people to Santa Barbara because of that quality of life.”

CONTINUED EVOLUTION: Success will only create more opportunity, as Meyer explained, “Often, companies are headquartered wherever the founder lives.” But she believes the biggest continued growth will be thanks to UCSB’s established tech ecosystem and a growing talent pool from Westmont College.

She explained, “Both will continue to create the space for entrepreneurial, innovative thinkers and draw them.”