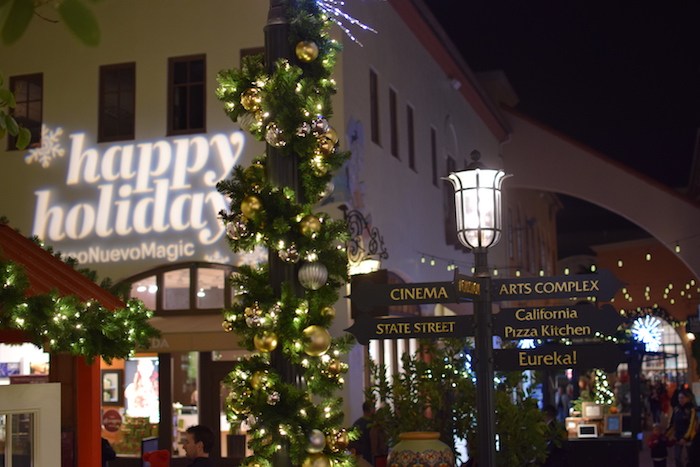 Black Friday kicks off the holiday season at Paseo Nuevo on Friday, November 23. Here’s the lineup of this season’s shopping, events and activities:

Black Friday  –The official start to the holiday shopping season, Black Friday on November 23 is getting an early start opening at 7 a.m., although some retailers will open even earlier.  For a full list of store hours, visit PaseoNuevoShopping.com.

On the retail front, new to Paseo Nuevo  this year is Mama Luma, a local children’s wear boutique specializing in beautiful dresses for little girls. Always a great place to purchase locally made gifts, the Yes Store is back again this year with their collection of artisanal items including wood pieces, pottery, jewelry and photographs. New to downtown is the Santa Barbara Night Market located in the former Macy’s department store.  Here you can experience a European-style night market complete with twinkle lights and holiday décor. Shop handcrafted items and holiday gifts or enjoy the food and beverage village. Open Thursday-Sunday from 4-10 p.m.  There’s also a Trinidad3 pop-up shop, in a one-of-a-kind Airstream trailer, outfitted with a denim bar featuring premium denim made in the USA. Trinidad3 is popping-up on Sundays in De La Guerra Place. 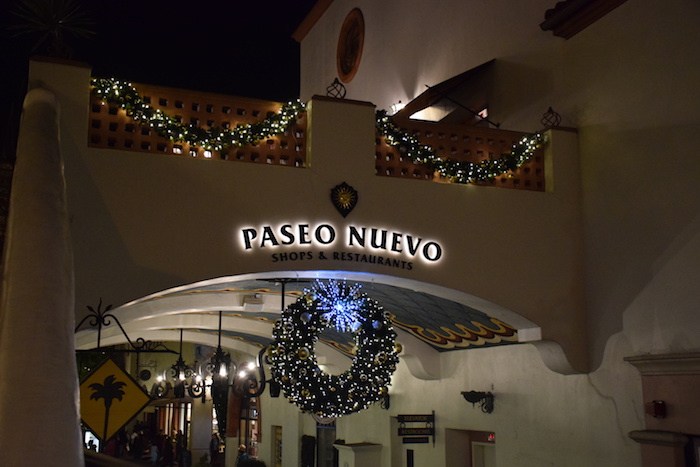 Let It Snow – Check out Santa Barbara’s “best in snow” when nightly snowfall shows take place twice each evening in Center Court as a flurry of white snow falls down on the Christmas tree, singing carolers, and shoppers, a magical tradition enjoyed by the entire family. Snowfall shows will start promptly at 6 p.m. and 7 p.m. from Friday, November 23 to December 31 (no shows on Christmas Day).

Silent Night Silent Disco – On Thursday, November 29 from 5:30-7:30 p.m., join Paseo Nuevo for Silent Night, a silent disco holiday dance party for the entire family! Wear your ugliest sweater and be prepared to dance and sing-a-long to your favorite holiday tunes through headphones! Come early to get headsets for the entire family. Jam to your favorite songs and watch the snowfall at 6 p.m. and 7 p.m. for the merriest night of the season—and it’s free!

Visit Santa – Santa takes up residence in his Santa Barbara home at Paseo Nuevo’s Center Court starting Friday, November 23. Children will be able to visit him daily through December 24. Santa will be open early on December 2 & 9 from 9-11 a.m. for children with special needs while Tuesday evenings will be open for pet photos where even the furriest family members can snap a photo with Santa. Every child will receive a free gift and Santa’s elves will be on hand to catch the precious moment in a photo. 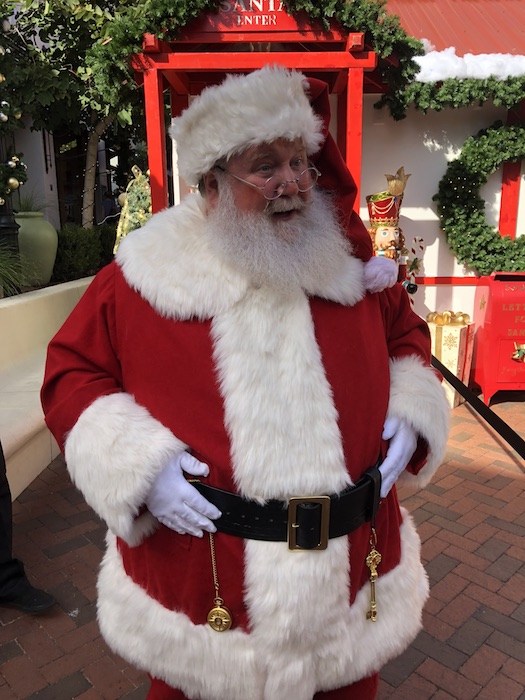 Breakfast With Santa – On December 1 and December 8, from 8-10 a.m., California Pizza Kitchen hosts a breakfast event featuring a special guest, Santa Claus! Breakfast includes a breakfast pizza, drink, and crafts for $10/child, $15/adult. Children under 3 eat for free. Call Evelyn at 805/962-4648 for reservations.

Live Entertainment – It wouldn’t be the holidays without costumed carolers, holiday horns, colossal choirs, and the occasional squeezebox roaming throughout the center filling the paseos with holiday cheer! A robust schedule of over 20 live entertainment ensembles will perform throughout the season daily. For the full schedule of performers, dates and times, visit https://paseonuevoshopping.com/events/holiday-music/

Win Prizes with #PaseoNuevoMagic –  For a chance to WIN weekly holiday themed contests, guests can snap, share and tag their holiday experience on Facebook, Instagram and Twitter with @ShopPaseoNuevo and hashtag #PaseoNuevoMagic. Winners will be chosen every week beginning November 23. 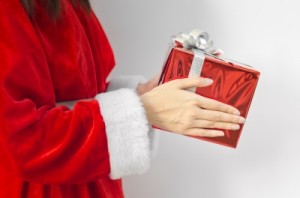 I’m not sure if you remember me. It’s been a while since I’ve written. Truthfully, I was giving you the silent treatment, whether you realized it or not, because in all the years I did write to you, you never, ever, ever got me what I asked for.

I always thought it was because I was Jewish and we didn’t have a tree, until someone explained to me that saints couldn’t possibly be anti-Semitic.

But I just found this box of old letters in my parents’ garage, so now I realize that it wasn’t your fault. I’m sorry, Santa. I really am.

I owe you an apology for all those nasty thoughts I’ve had about you. Like when I didn’t get the pink Barbie convertible in 1970 and I drew a Hitler moustache on your picture. Or when you didn’t bring me a pony in 1974 or that purple Camaro in 1979 and I made those little kids cry when I told them you weren’t real. I feel especially bad for all those mean things I thought about you when Captain Awesome dumped me and took Princess Not-So-Nice to the Winter Formal in 1980, when I had already bought my red taffeta dress and everything. Those ex-lax brownies I left you the next year were truly unforgivable, but I’m asking you to forgive me anyway.

See, now I realize it wasn’t your fault. You didn’t get my letters because my mom never mailed them.

I’m sure my mom meant to mail my letters, but she just got busy. You know how it is. I certainly do. That’s actually why I’m writing to you now, and to apologize, of course. See, this year I really need something I can’t find in the stores, or even on the Internet. Believe me I’ve tried. What I really need this year is a clone of myself. I’m not kidding. There’s not enough of me to go around these days.

I can’t keep up with the whole Christmas comparathon competition. It’s bad enough that I’m losing in the cooking and crafting divisions, but then there are the cards. Those daily reminder letters about how perfect everyone else’s family is make me want to scream. “Matt and Karen’s fetus just received early admission to Harvard for 2025,” and my kid can’t even remember to take his backpack out of the car and hang it on the hook in his room! And he’s trying to remember, that’s the worst part.

I’ve tried being in four or five places at the same time, but for some incredibly frustrating reason it just isn’t working. I’m always late and half the time, once I get somewhere, I forget what I’m supposed to be doing in the first place.

I’d love to know how you manage to visit every house on Christmas Eve, Santa. If you would share that one secret with me, then maybe I wouldn’t need to ask you for a clone.

Here’s a typical day, yesterday. I needed to go to Koss’s school early, to help with a fundraiser. This meant I had to wake myself up early and get him up and dressed early, none of which bodes well for the rest of the day. Especially since the mom who was supposed to bring the coffee apparently forgot. If anyone deserves a lump of coal…!

I also had an interview scheduled that morning, a doctor’s appointment, we were out of orange juice and it was laundry day, which means my socks didn’t match. Plus, my husband couldn’t find an address he needed and I really had to pee and he was still brushing his teeth.

The rest of a day went by in a similar whirl of stories to write, calls to make, gifts to buy, and emails to answer.

Then, just as I finally got him settled at practice and I had a few minutes to organize myself, the person I was supposed to interview the day before finally called me back. Where did I put my notes again? I seem to have misplaced my short-term memory. I know it was around here somewhere.

Anyway, Santa, if you’re still reading, you get the picture. I could really use some help around here. I just found a huge stack of last year’s thank you notes I forgot to mail, along with a letter that Koss wrote to you. I meant to mail it, I really did. But if you get him that puppy he asked for, then we’re really going to have some issues!

Originally appeared in the Santa Barbara Daily Sound on December 14, 2007.