In taking a look at the latest news and trends related to education in Santa Barbara County, it’s clear that there is an impressive breadth and depth of learning opportunities here in town. From the readers and writers workshop model to incorporating mindfulness practices, social-emotional learning, Latin studies, highly experiential learning, and meshing digital design with fine art traditions, educators are working hard to develop strategies that work for the ways individual students learn best.

This special section was developed by asking the issue’s sponsors to suggest story ideas based on people, projects, or trends that they’re excited about in their schools and organizations. From that list, we selected stories that represent a wide variety of learning experiences in Santa Barbara and produced the editorial content independently.

We hope you enjoy it and learn something new about learning!

Raising S.B.’s Next Generation of Teachers

SBCC Auto Tech Gears Up For The Future

SBCC Brings the World to the Kitchen

S.B. Middle School Brings Its Best to the Table

The Joy of Experiential Learning at Crane School

The Montessori Method’s Many Success Stories

Unplugged Yet Connected at Midland School

Leslie Dinaberg is currently the editor in chief of Touring & Tasting magazine. She spent the last 11 years as managing editor of Santa Barbara Seasons, has also edited national business and college student magazines, and writes regularly for a number of publications. Leslie has also authored three nonfiction children’s books and is the coauthor of Hometown Santa Barbara: The Central Coast Book, an insider’s guide to her hometown. See lesliedinaberg.com or follow her on Instagram (@LeslieSDinaberg) and Twitter (@lesliedinaberg). 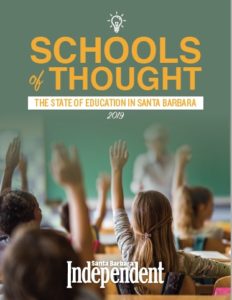 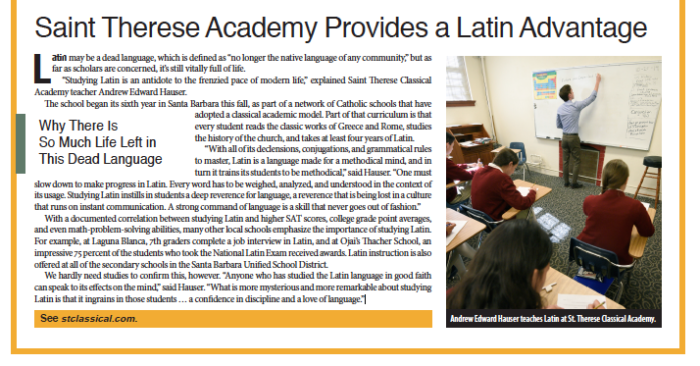 Why is There so Much Life Left in This Dead Language?

Latin may be a dead language, which is defined as “no longer the native language of any community,” but as far as scholars are concerned, it’s still vitally full of life.

The school began its sixth year in Santa Barbara this fall, as part of a network of Catholic schools that have adopted a classical academic model. Part of that curriculum is that every student reads the classic works of Greece and Rome, studies the history of the church, and takes at least four years of Latin.

“With all of its declensions, conjugations, and grammatical rules to master, Latin is a language made for a methodical mind, and in turn it trains its students to be methodical,” said Hauser. “One must slow down to make progress in Latin. Every word has to be weighed, analyzed, and understood in the context of its usage. Studying Latin instills in students a deep reverence for language, a reverence that is being lost in a culture that runs on instant communication. A strong command of language is a skill that never goes out of fashion.”

With a documented correlation between studying Latin and higher SAT scores, college grade point averages, and even math-problem-solving abilities, many other local schools emphasize the importance of studying Latin. For example, at Laguna Blanca, 7th graders complete a job interview in Latin, and at Ojai’s Thacher School, an impressive 75 percent of the students who took the National Latin Exam received awards. Latin instruction is also offered at all of the secondary schools in the Santa Barbara Unified School District.

We hardly need studies to confirm this, however. “Anyone who has studied the Latin language in good faith can speak to its effects on the mind,” said Hauser. “What is more mysterious and more remarkable about studying Latin is that it ingrains in those students … a confidence in discipline and a love of language.”