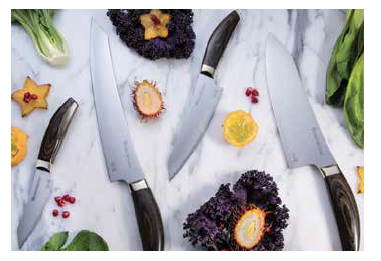 Amid all of the recent cooking at home, upgraded kitchen equipment has become an especially welcome commodity, and no tool eases food preparation more than an exquisite knife. “A high-quality, handcrafted knife is razor sharp, balanced, comfortable to use, and easy to sharpen,” says Kirsten Dressler Wilson, vice president of the Ojai-based
Messermeister (messermeister.com) cutlery company. “It makes it so much easier to chop ingredients fast. The first time you use a great knife, you finally realize how bad your old knives really were.”

Wilson, who runs the family-owned business with her sister Chelcea Dressler-Crowley and their mother Debra Dressler, should know. Her father, a German native, brought his passion for the premium, hand-forged cutlery of his homeland to the U.S. in 1981 and established the Messermeister (translation: knife master) line in 1985. Four decades
later, the brand encompasses a wide array of professional-quality chef knives, kitchen cutlery, and cooking tools, all of which can be purchased online and at selected retailers.

Click here to see this story as it originally appeared in the March 2021 issue of 805 Living Magazine.