Brad Nack, one of the key figures in the Funk Zone art scene, is moving on from his position as curator at MichaelKate Interiors and Art Gallery to become Executive Director of The Santa Barbara Arts Fund, right across the street. In typical Nack fashion, he’s going out with a splash.

The gallery is throwing a big art party this Friday night, September 12, from 5-8 p.m., featuring DJ Zac Pike and moderator Ted Mills, along with an impressive line-up of artists whose work the gallery has shown during Nack’s tenure.

The event is free and the artists include: 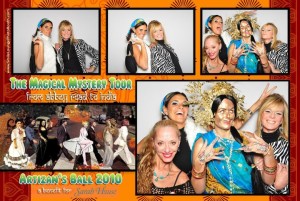 Noted artists Hank Pitcher, Rick Schloss, Matti Berglund, Jane Sun, Brad Nack, Michael Drury, Tom Henderson, Kathleen Elsey, Anthony Ocone, Larry Iwerks and Barnaby Conrad are but a few of the more than 100 artists who have donated their work to assist Sarah House and AIDS Housing Santa Barbara at their annual holiday Light Up The Night benefit at the Santa Barbara Woman’s Club on Saturday, December 8, from 6 to 10 p.m.

Sarah House is the only “social model” home in the nation offering hospice care for low-income or homeless individuals who are in need of a place to die with appropriate care and dignity. Named for the late Sarah Shoresman, whose daughter, Linda Lorenzen-Hughes, remains active on the board of directors, Sarah House does not receive government funding, but relies instead on donations to keep the facility open for those in need.

This year’s fundraiser theme is “The Artizans’ Ball,” which centers on the silent auction of works of art and tabletop holiday trees and wreaths, as well as spectacular vacations in Tuscany, Hawaii, and Careyes, Mexico. This is a different twist for the 16th annual Light up the Night, which has traditionally auctioned off holiday trees designed by local artists and supporters.

“We feel like it’s always good to reinvent yourself,” says chair Kerrie Kilpatrick-Weinberg, who is herself an artist and the founder of Artwalk for Kids. “We’ve done Light up the Night for several years and there’s other people doing trees now, so what this will be is a ball, music, lovely food and drinks, but more importantly art everywhere…It’s very much an auction centered around art energy in Santa Barbara, with the artistic community donating to Sarah House.

The only thing that will be silent will be the auction. The evening includes entertainment by Cats’ N’ Dogs with Lois Mahalia, Tom & Gabe Lackner; the national award-winning San Marcos Madrigals choir; the Living Muses, Buddy Winston, and a surprise or two. Food will be from New West caterers, with local wines from Buttonwood Farm Winery and Alma Rosa Winery and a special bar featuring original concoctions by the Wildcat Lounge, such as a Cosmo Van Gogh and Warhol-on-the-Rocks.

Costumes are optional but everyone is encouraged to come dressed as their favorite artist or in something inspired by a work of art. Tickets are $100 suggested donation. To purchase tickets call 882.1192 or visit www.Sarahhousesb.org