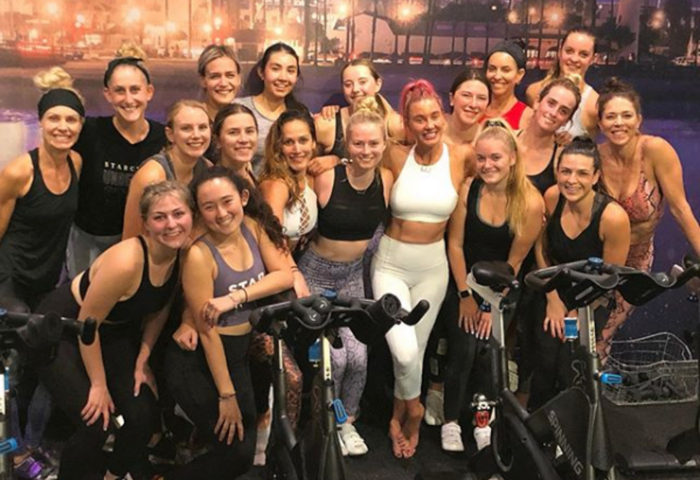 “It’s a dance party on a bike, like when you’re at a wedding and your jam comes on and you don’t care what anybody thinks — you just get up there and move your body.” That’s how co-owner Dani Stone describes the workout at StarCycle. The La Cumbre Plaza fitness center is part of a new breed of indoor cycling studios that use music and choreography for a physical and mental approach to cycling.

At StarCycle, the lights go off before the 45-minute full-body workout begins.

“The most appealing part to me has been that we work out in the dark, which allows you to really focus on yourself and just ‘do you,’ — modifying as needed,” said Julie Sorenson, who joined the gym on an introductory membership in March 2019 (StarCycle opened on February 28) and recently completed her 170th ride.

“The community there is incredible, and the instructors are super motivating,” she said. “It’s empowering. I can feel the positive energy in the room when I ride. The full-body workout (with weights) has also helped me heal from a shoulder injury.”

Another big appeal for members is that childcare is always available. Moms are the target demographic for the studio, explained co-owner Kayla Johnson-Neal, a personal trainer and fitness professional who’s been working in the industry for 24 years. “With young kids, they are maybe at a phase in life where they aren’t that challenged, so the challenge of doing this workout is like they’ve climbed Mount Everest. It is so fun to watch.”

Themed music rides, ranging from holiday specials to boy bands, Coachella, Stagecoach, and special “naughty rides with explicit lyrics” are also part of the attraction, as is the warm, welcoming atmosphere, where clients are greeted with smiles and hugs.

“I’ve never seen results like this in all of my years of experience. And we’re only a year in now. People have melted,” Johnson-Neal said. “But you know what I love? Weight loss is not what they talk about. Somebody came up to me yesterday and hugged me and started crying and saying, ‘I’m a better wife and a better mom because of StarCycle.’ She’s lost weight, but that’s not where the focus is, and that’s what I think is so cool.”

StarCycle co-owner Kayla Johnson-Neal, right, has been in the fitness industry for 24 years, courtesy photo. 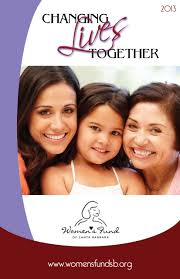 “Collaborative efforts are part of the future of philanthropy,” said Natalie Orfalea, addressing the Women’s Fund of Santa Barbara’s annual luncheon on Jan. 28.

As chairwoman of the Orfalea Fund and co-founder of the Orfalea Family Foundation, Orfalea is an expert on collaborative giving, and was instrumental in developing her foundation’s partnership with the Women’s Fund. With Orfalea matching all of the money raised by the Women’s Fund, it was able to award $600,000 to support the work of eight local nonprofit organizations: Angels Foster Care of Santa Barbara, Casa Pacifica, Family Service Agency, Girls Inc. of Greater Santa Barbara, Isla Vista Youth Projects, People’s Self-Help Housing, Storyteller Children’s Center and Transition House.

This brings the total amount given to the community by the Women’s Fund to $1,425,000, in just four short years of existence. The grassroots group was founded by a small group of women — chairwoman Carol Palladini and Perri Harcourt, Shirley Ann Hurley, Jean Kaplan, Dale Kern, Joanne Rapp, Elna Scheinfeld, Meredith Scott, Kay Stern, Anne Smith Towbes, Marsha Wayne and Fritzie Yamin — who were interested in contributing to the community without having to sell tickets, make decorations, solicit auction items or spend valuable resources to bring in funding for nonprofit organizations.

It’s a simple, yet powerful, idea that’s growing in the philanthropic community: Why not take the time, energy and money spent on producing and attending elaborate fund-raisers and write a single check once a year to put that money where it’s most needed.

The concept of giving circles — pooling resources with other donors to have a bigger impact — is catching on, too, not just with the Women’s Fund but within the Women’s Fund as well. To become a member of the Women’s Fund, a woman simply writes a tax-deductible check for $2,500 once a year and in return receives one vote to decide where the funds will be distributed. When the group started in 2004, it targeted women who could easily make the $2,500 donation required to participate.

In recent years, the circle of giving has widened to include group members — often younger women in the community who can’t afford the entire $2,500 donation — who pool their money and share one vote. SBParent.com has put together two of these groups, and there are 28 other sets of women who are neighbors, coworkers, friends and acquaintances who also contributed to the fund as group members, with anywhere from two to 12 members pooling their funds to come up with the required $2,500.

The idea of the money donated going directly to help people, rather than being spent on events or fund-raising expenses appealed to SBParent’s Julie Sorenson and Rachael Steidl. Other members said they joined the group to meet like-minded women or to learn more about the nonprofit organizations serving the community. Assisted by the Santa Barbara Foundation, the research committee does all the legwork to identify causes that align with the Women’s Fund goal of giving to meaningful projects affecting women, children and families.

The largest gift awarded by the Women’s Fund this year was a $150,000 leadership grant to Storyteller Children’s Center, for its $2.5 million expansion campaign that will be launched in 2008. Storyteller, which provides high-quality free preschool for homeless and at-risk children, will use the funds to help establish a second center on De la Vina Street. The organization will serve 1,000 homeless and at-risk children and their families in the next decade, said executive director Terri Allison.

“One in every five children in Santa Barbara County lives in poverty,” Allison said. And while these funds will greatly expand the availability of services, “for every child who joins Storyteller, we must place one on our waiting list.”

Family Service Agency’s 211 Human Services Helpline was awarded $95,000, an amount that will provide one-third of the funding needed to carry on the operation of the helpline when government funds expire in 2008.

Angels Foster Care of Santa Barbara was awarded $85,000 to pay for a licensed social worker to recruit, screen, train and support 20 foster families, doubling the number of infants and toddlers that were placed in foster care in 2007.

“These parents risk their own broken hearts,” said executive director Meichelle Arntz, “and this money allows us to provide them with additional support.”

Isla Vista Youth Projects, which lost state funds in 2007, received $60,000 for a family advocate and counselor for one year. This gap funding will restore programs to keep low-income families healthy through regular medical and dental care.

Girls Inc. of Greater Santa Barbara was awarded $55,000 for its Teen Mentoring Program. Thise program expansion will allow girls 13 to 18 years old to participate in Girls Inc. for the first time locally. In the past the agency only served girls up to age 12.

Casa Pacifica received $55,000 to purchase three cars to enable caseworkers and mental health professionals to deliver 24/7 mobile emergency services for youth in immediate psychiatric crisis and to provide assistance for families with youth who are at risk for being placed in foster care.

As if helping these worthy organizations weren’t reward enough, oversight committee chairwoman Jo Gifford told the crowd of approximately 150 women that she recently learned that givers are happier than nongivers, less depressed, and full of the hormones that reduce stress.

“So with that in mind, I stand before the happiest, least depressed and least stressed women in Santa Barbara,” she said.

For more information about the Women’s Fund of Santa Barbara visit www.womensfundsb.org or contact Jo Gifford at 805.969.3320 or mjog@cox.net.

Originally published in Noozhawk and SBParent.com on January 30, 2008.