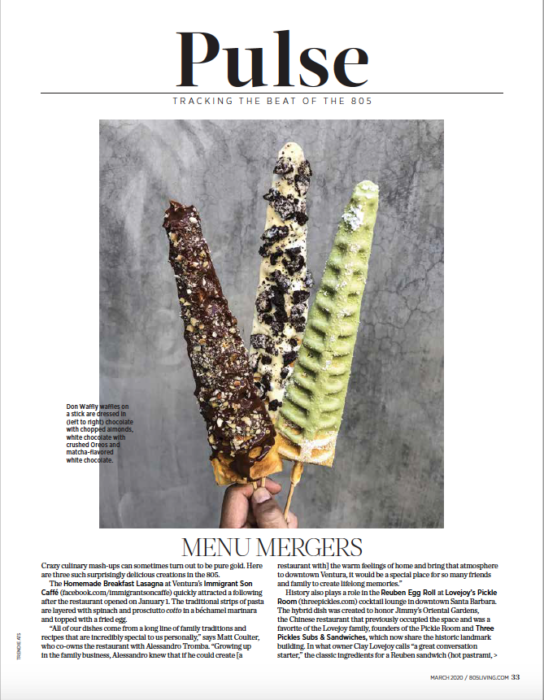 Crazy culinary mash-ups can sometimes turn out to be pure gold. Here are three such surprisingly delicious creations in the 805.

The Homemade Breakfast Lasagna at Ventura’s Immigrant Son Caffe (facebook.com/immigrantsoncaffe) quickly attracted a following after the restaurant opened on January 1. The traditional strips of pasta are layered with spinach and prosciutto cotto in a béchamel marinara and topped with a fried egg.

“All of our dishes come from a long line of family traditions and recipes that are incredibly special to us personally,” says Matt Coulter, who co-owns the restaurant with Alessandro Tromba. “Growing up in the family business, Alessandro knew that if he could create [a restaurant with] the warm feelings of home and bring that atmosphere to downtown Ventura, it would be a special place for so many friends and family to create lifelong memories.”

History also plays a role in the Reuben Egg Roll at Lovejoy’s Pickle Room (threepickles.com) cocktail lounge in downtown Santa Barbara. The hybrid dish was created to honor Jimmy’s Oriental Gardens, the Chinese restaurant that previously occupied the space and was a favorite of the Lovejoy family, founders of the Pickle Room and Three Pickles Subs & Sandwiches, which now share the historic landmark building.

In what owner Clay Lovejoy calls “a great conversation starter,” the classic ingredients for a Reuben sandwich (hot pastrami, sauerkraut, Russian Dressing and Swiss cheese) are wrapped in eggroll skin and deep fried.

Why put a waffle on a plate when it can be served on a stick? Inspired by Mexico’s mangos and other treats on sticks, “Don” Francisco Lara decided to go vertical with his Don Waffly waffle on a stick (instagram/donwaffly), making it from scratch and dipping it in milk chocolate, white chocolate, matcha-flavored white chocolate, or cajeta (Mexican caramel sauce) before sprinkling it with toppings like shredded coconut, crushed Oreo cookies, Fruity Pebbles cereal, chopped almonds, or sprinkles. The waffle sticks are available at Dolce Vita (805-746-5009) in the Oxnard Transit Center and can be ordered for on-site catering.

Lara’s son Javier says he and his father plan to expand the offerings to include savory varieties and add a food truck to the mix.        —Leslie Dinaberg 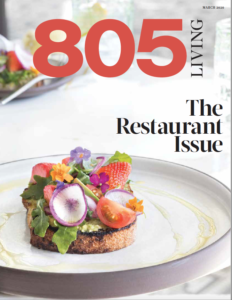 “Santa Barbara needs a lounge where people can hang out and be off State Street and kick their feet up and be comfortable,” says Clay Lovejoy, who recently opened the Pickle Room, 126 E. Canon Perdido St. (805/965-3445), with the aim of providing that very thing. The spot is a reincarnation of sorts of Jimmy’s Oriental Gardens, a favorite local watering hole owned and operated by the Chung family in that spot from 1947 until 2006. 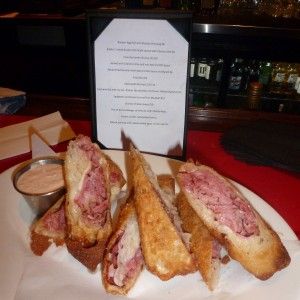 “This place was founded on the Mai Tai,” says Clay. “It was Tommy’s, the original owner’s, recipe, in fact probably his father’s recipe before that, because he was pretty young …  our Mai Tai is our most popular drink by far.”

Luckily, he’s got an able hand behind the bar to mix that potent concoction of Myer’s Platinum Rum with an exotic blend of fruit juices splashed with dark rum and Bacardi 151 Rum. Bartender Willy Gilbert, a close friend of the Lovejoys who ran the place for 25 years, is back behind the bar to mix those yummy rummy Mai Tai’s, along with Singapore Slings, Moscow Mules, Hornito’s Margaritas and more.

“We hired him as a manager to come in here and help us out because we wanted it to run seamlessly,” says Clay. “He’s a huge part of making this a success. We’ve been actually very busy for the last month and have had great crowds.  So with his help we’re learning along the way.” 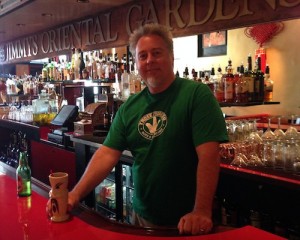 The menu, which Clay describes as “Chinese Deli,” was created by executive chef Westen Richards (formerly of Restaurant Julienne and Wine Cask and currently earning kudos for his creative Spare Parts pop up restaurant). “The Reuben Egg Roll is our #1 seller and people just absolutely love it,” Clay says. “We were trying to think of something fun … we use our pastrami, our sauerkraut and Swiss cheese and we roll it in a egg roll and serve it with our Russian dressing,  same as the other side. So that’s been quite a hit.”

And of course, with a name like the Pickle Room, there have to be pickles.

Clay laughs. “You know what’s been a really hot thing is—we have to of course tell people about it because they’re not used to it—but if you do a shot of whiskey and  you do a pickle back shot … You take a little shot of pickle juice it and it knocks it out of your palate so fast and after people try it they just start lining them up … it’s been very popular.”

New to the menu this week is the Pickletini , “A little bit of pickle juice with gin or vodka and then a nice little pickle spear.” Clay smiles, perhaps at the skeptical expression on my face. “Everybody I tell about it, they’re like ‘that sounds terrible,’ but everybody that tries it is like ‘oh that is awesome I don’t even like pickles but I like that!'”