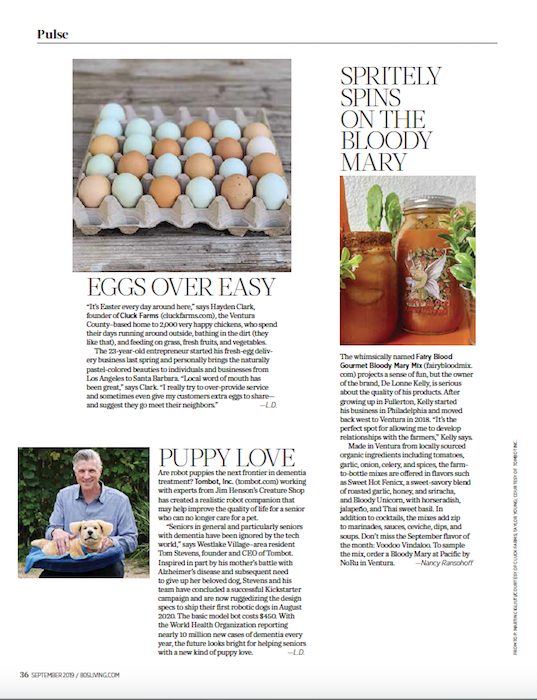 Are robot puppies the next frontier in dementia treatment? Tombot, Inc. (tombot.com), working with experts from Jim Henson’s Creature Shop, has created a realistic robot companion that may help improve the quality of life for a senior who can no longer care for a pet.

“Seniors in general and particularly seniors with dementia have been ignored by the tech world,” says Westlake Village–area resident Tom Stevens, founder and CEO of Tombot. Inspired in part by his mother’s battle with Alzheimer’s disease and subsequent need to give up her beloved dog, Stevens and his team have concluded a successful Kickstarter campaign and are now ruggedizing the design specs to ship their first robotic dogs in August 2020. The basic model bot costs $450. With the World Health Organization reporting nearly 10 million new cases of dementia every year, the future looks bright for helping seniors with a new kind of puppy love. —Leslie Dinaberg 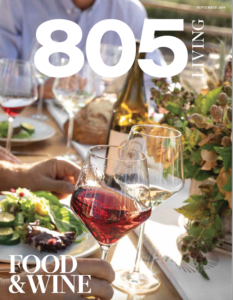 Santa Barbara’s women’s surf program, iSurf School, has launched a new Watergirl Fund to help introduce girls to the joys of surfing. The fund is a scholarship program that will provide needs-based scholarships for surf instruction and will introduce the wonders of surfing to girls, ages 5-15, who would don’t have access to the sport.  The fund will also provide 100% scholarship and sponsorship funded surf programing to Girls, Inc. throughout the year, according to a statement from Alelia Parenteau, the owner of iSurf School.

The Fund will officially launch on Aug. 17 at the  iSurf Block Party, produced by WA Event Management & Consulting and hosted by The Valley Project (AVA Santa Barbara) and Pali Wine Co. The festivities include a silent auction, raffle, music, pig roast, ice cream stand and beer and wine.

Parenteau says “The goal is to raise $15,000 to provide needs-based scholarships up to 30 girls to attend a quarter of after school program. The girls selected would not have been able to attend without the invaluable support of the community.”

“Everyone has their own unique way of surfing,” says Gabi Turnbull, age 9 and an alum of the iSurf After School Program, “some surf schools teach the “one” way to surf but at iSurf you’re encouraged to develop your own style and explore your interests. Plus, I feel like a part of something bigger – a connection with the environment and the global surf community. My life IS surfing now, that’s how much I love it.”

“We are completely humbled by the support of the community to make this event a major success,” says Parenteau, “it’s amazing to see how many people think this cause is important and see the value of this program and of surfing in general to the young girls in our community.”

The event will be held on Sunday, August 17 from 5–9 p.m. at the Valley Project and Pali Wine Co, 116 E. Yanonali St. in the Funk Zone. For more information click here. 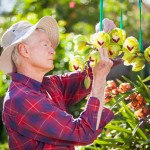 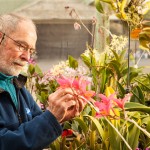 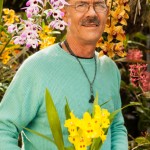