With Thanksgiving right around the corner, I’m sure some super-organized hosts already have their menus color coded and the ink is dry on their calligraphy place cards. To those people I say, “thanks for making the rest of us look bad” … and to the rest of us I say: “forget struggling over the crust:  Grandma Tommie’s Apple Pie Liqueur is the best apple pie you’ve ever had in your life!”

I was hooked from the first sip of this spicy, cinnamon-tastic, delicious liqueur from Cutler’s Artisan Spirits (the tasting room and distillery is at 137 Anacapa St., Suite D, in the heart of Santa Barbara’s Funk Zone). Seriously, it’s even better than dessert, and I don’t say that very often. 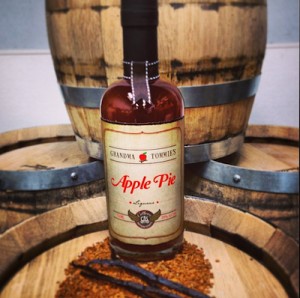 As Ian Cutler explained when I visited the tasting room a while back, the flavor was inspired by his Grandma Tommie’s Apple Pie recipe (which had to have been out-of-this-world yummy). He starts with Cutler’s ultra premium extra smooth 7 times distilled Vodka, and adds fresh apple juice, certified organic whole vanilla beans, certified organic cinnamon and other spices to mimic that perfect fresh baked apple pie taste.

Taste it at Cutlers’ Artisan Spirits, then mosey a few doors down to Les Marchands Wine Bar & Merchant (131 Anacapa St., Suite B) to buy a bottle (or two)  to take home and get into the spirit and “prepare” for Thanksgiving.

(Click here for an additional list of local places to purchase Grandma Tommie’s Apple Pie Liqueur, as well as the fine establishments where Cutler cocktails are served.)