“Nobody ever says it’s too easy to take care of my garden,” laughed landscape

His approach to working with clients is straightforward. “I’m a service provider,” he said. “My attitude is not that you’ve hired some high-end person and you’re lucky to have me. I try to design as egolessly as possible. If I step over the bounds and they need to rein me in, that’s fine because I’m just there to provide a service. I know about this stuff, and they don’t.”

After working for City of Santa Barbara Parks and Recreation for more than 20 years, Goodnick learned that “most park planting is about getting the most cluck for your buck out of the site.” He applies that same philosophy to working with clients and teaching classes for home gardeners, which he does around the country. “I always start with a slide that says we have three goals: Make it beautiful, make it useful, make it sustainable — and those are the three touchstones for me.”

A natural entertainer and raconteur, Goodnick began his career as a musician and still performs as the drummer for King Bee. His sense of humor is evident from his lecture titles: Life After Lawns; How to Kill Your Lawn Without Using Napalm; Gone with the Wind: What to do with Your Drought-Stricken Lawn; and Crimes Against Horticulture: When Bad Taste Meets Power Tools.

“I have a monstrous ego, and I like to see people nodding and laughing because it’s edutainment,” said Goodnick. “Somebody once said, ‘You could charge a two-drink minimum for your lectures.’”

After some initial conversations with clients, Goodnick uses a website called PlantMaster to provide a big list of plants that meet their criteria. “You’re stocking the pantry,” he tells them. “You don’t know what the meal is — you just went to Whole Foods with a $500 gift card and threw everything into the basket that you like. I’ll figure out how to turn it into a meal.”

It really comes down to what the customer likes and what will work with the site. Though he recognizes most clients don’t have Oprah’s budget, he does ask them to pretend they won the Publishers Clearing House sweepstakes in the beginning. “Let’s design as if money is no object, and let’s explore all of the different things that could happen here,” he explained. “There may be a great idea, without being too terribly constrained at first, that we can simplify or downsize to make it less expensive later.”

He sees his role as a problem solver, and he is happy when gardens are being used as designed a year or so later. He’s also satisfied when plant choices succeed. “There’s that whole biological side of landscape architecture and not mixing it with other plants that want twice as much water and spacing them properly so you don’t end up with plants colliding into each other,” he explained. “I’m trying to make it easy on them, make it fit their lifestyle, and also be drop-dead gorgeous.” 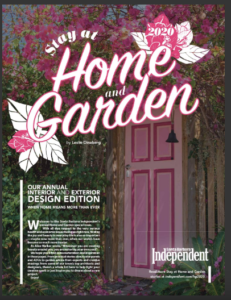 Stay at Home and Garden, special issue of SB Independent May 14, 2020.

This story was originally published in the Santa Barbara Independent on May 14, 2020. Click here to read it as it appeared in print.