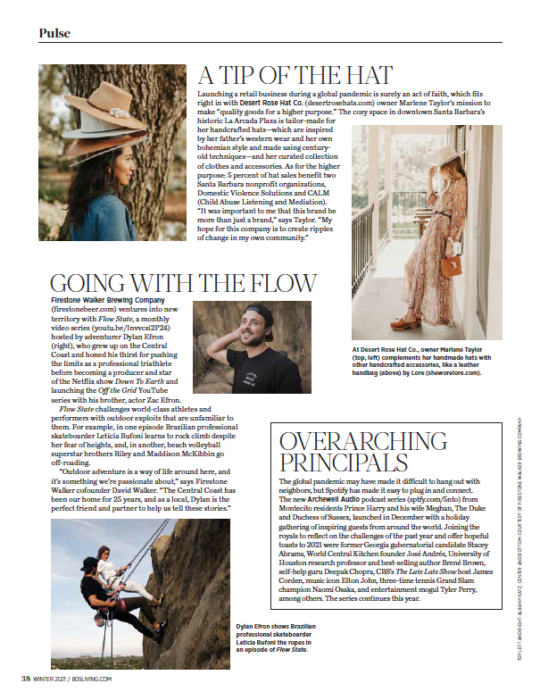 Firestone Walker Brewing Company (firestonebeer.com) ventures into new territory with Flow State, a monthly video series (youtu.be/Invvcsi2P24) hosted by adventurer Dylan Efron, who grew up on the Central Coast and honed his thirst for pushing the limits as a professional triathlete before becoming a producer and star of the Netflix show Down To Earth and launching the Off the Grid YouTube series with his brother, actor Zac Efron.

Flow State challenges world-class athletes and performers with outdoor exploits that are unfamiliar to them. For example, in one episode Brazilian professional skateboarder Leticia Bufoni learns to rock climb despite her fear of heights, and, in another, beach volleyball
superstar brothers Riley and Maddison McKibbin go off-roading.

“Outdoor adventure is a way of life around here, and it’s something we’re passionate about,” says Firestone Walker cofounder David Walker. “The Central Coast has been our home for 25 years, and as a local, Dylan is the perfect friend and partner to help us tell these stories.”

Click here to see this story as it originally appeared in the Winter 2021 issue of 805 Living Magazine.

Seeing the World Through Bacon-Flavored Glasses, photo by Tyler Moselle

My bacon-phile colleagues and I were living high on the hog last weekend at the first annual Bacon & Barrels Festival at Saarloos + Sons‘ wine field in Los Olivos.

To label this sold-out event decadent would be an understatement. The festivities included creative bacon (and pork) dishes from top Central Coast chefs, bacon-based and bacon-inspired cocktails, wines and beers concocted by mixologists, brewers and wineries, live music and even a pig petting zoo.

Let me just say, they had me at “bacon” (which pop poet Katy Perry so brilliantly called “the meat candy of the world”) but everything at Bacon & Barrels was pretty fabulous. Our very first bite was an amazing crunchy melted cheese and pork sandwich from Ranch & Reata Roadhouse in Santa Ynez. It was exceptional, and that was before my first tipple.

As to the barrel side of things—wine, spirits, beer—there was a lot of good stuff to choose from, including wine from Tercero, Liquid Farm, Casa Dumetz, Tessa Marie, Sunstone, Press Gang Cellars, Buttonwood, Point Concepcion, Alta Maria Vineyards, Refugio Ranch, Consilience, Tre Anelli, Riverbench (which just opened up a new tasting room in the Funk Zone at 137 Anacapa St.), Cold Heaven and of course, our hosts, Saarloos + Sons.

So much bacon goodness to choose from, as Jim Gaffigan says, “Do you want to know how good bacon is? In order to improve other food, they wrap it in bacon.” Indeed! The Ballard Inn & Restaurant, The Willows, Fresco, Georgia’s Smokehouse and Full of Life Flatbread were a just a taste of the yummy bites that were on hand.

But given the heat on Saturday, beer paired especially with all of that porky goodness. The Jefe Del Porko award went to Sides Hardware and Shoes—A Brothers Restaurant, for their bacon burger and peach and bacon panzanella, which was mouth-watering indeed, especially with the pale ale from Figueroa Mountain. The Bruery, Stone Brewing Company, Sierra Nevada, Firestone Walker, Ninkasi Brewing, Central Coast Brewing, The Brewery at Abigaile, Almanac Beer Company, Mendocino Brewing Company and New Belgian Brewing Co. (with a fun “Lips of Faith” series of collaborative beers) were all on hand to wet our whistles.

Hard not to Enjoy Cupcakes when they’re covered with bacon! Courtesy photo

Try as I did to limit my libations to beer that day, I was unable to resist Root 246‘s amazing bacon-infused Manhattan, garnished with a drunken cherry and served in an ice cube shot glass. Try that with the Stuffed Salted Bacon Maple Cobbler Cupcake from Enjoy Cupcakes (coming soon to the Santa Barbara Public Market) and I guarantee you’ll be in hog heaven. My calendar is already marked for the next festival, July 18-20, 2014.