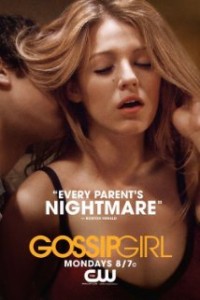 I have a really, really, really embarrassing confession to make. I hope you won’t think less of me, but I’m trying to come to terms with something I’ve kept hidden for far too long. I’m addicted to teen soap operas.

“Gossip Girl,” “One Tree Hill,” “Privileged,” I’ve got the whole CW oeuvre on my DVR.

I haven’t been a teenager for more than two decades and I don’t even have a teenager to watch these shows with–or a tweenager for that matter–but that doesn’t stop me from obsessing about these shows.

I wish I could blame my family, but my son would rather kick a ball or read books or even do homework than watch such ridiculous TV. And my husband, well, let’s just say that watching any of these shows with my husband would be opening myself up to a level of ridicule far greater than a combination platter of split ends, zits, and the wrong kind of hair band.

I blame it all on Jason Priestly and his sparkly blue eyes. If it wasn’t for that innocent-but-not-so-innocent twinkle, I would have never become addicted to “Beverly Hills 90210,” and then “Melrose Place” and “Dawson’s Creek” and all of those painfully captivating shows. Forget the fact that I had already graduated from college the first time I laid eyes on Brandon Walsh. Here was the nice, smart guy I’d been looking for, the one who has no idea how incredibly good looking he was.

Forget that I was way out of high school and shacking up with my husband in “Beverly Hills 90210’s” heyday. If Jason Priestly could still play a high school kid at age 27, then I could certainly ogle him.

That’s what got me hooked and has kept me hooked for all of these years. If it’s a soapy show set in a suburban high school, I just can’t stop myself from watching it.

After all, every single one of those shows has a Brandon Walsh character, which means I just can’t look away.

Over the years there’s been “The OC,” “My So-Called Life,” “Party of Five,” “The Secret Life of the American Teenager,” “Hidden Palms,” “Roswell,” “Felicity“–an irresistible lineup of interchangeable shows with semi-riveting plots about bullies, foster kids, teen pregnancy, shoplifting, back stabbing girlfriends and the underlying theme that life is rough for adolescents, especially the affluent ones with $500 purses and $900 shoes.

The quality of the shows even got better for a while, not that it was ever about quality–and for a time there was “Veronica Mars” and “Buffy the Vampire Slayer,” which my husband would actually watch with only minor mockery.

Despite the varying levels of quality in teen soaps, there are always a few constants I can rely on: a bunch of pretty, stylishly dressed people living out a make-believe existence in which high school kids reside without parental supervision, except for the one intact family with a telegenic kitchen where “the gang” can gather for holidays and special episodes.

Watching is a guilty pleasure but it feels good to come clean.

I haven’t missed an episode of the new “90210,” where a few of the original characters are still hanging around West Beverly High and the Peach Pit. It’s not fabulous television, but it’s fun and reliably entertaining and a great way to decompress after a long hard day of trying to be a grown up.

Plus I hear Jason Priestly’s going to direct a few episodes.

Originally published in the Santa Barbara Daily Sound on October 24, 2008.