How does your co-star rate on romance? 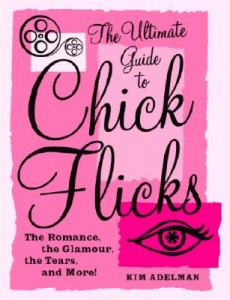 Here’s a big fat clue for men everywhere — women like chick flicks. They make us happy. We get all mushy and soft lipped and prone to romantic suggestions — or, as my husband likes to put it, “easy”– when the girl ends up with the right guy on screen.

So why is it that we have to drag men kicking and screaming to go see a chick flick? My friend Kim Adelman, who recently authored The Ultimate Guide to Chick Flicks, theorizes that it starts when they’re teenagers.

“Male teenagers, in particular, seem to have an infallible radar detector warning them away from a film that their mother might enjoy, while female teenagers, (who we all know are smarter, more mature, and have much better taste in movies) innately sense that anything with ‘wedding’ or ‘princess’ in the title is worthy of their patronage.”

Then there are real life romances, which of course, are destined to be compared to the movies. Since Kim took the trouble to outline the ten basic steps in a movie romance, I decided to see how they stack up against my real life.

Step One: Create a Sympathetic Heroine

I’m a sympathetic heroine, right? I mean I know I get a bit cranky sometimes, but I think I’m pretty likeable. And I wear glasses, which help hide some of my movie star glamour and make me look smarter, and uh, help me see.

Like many movie heart throbs, my husband was deeply flawed when we met, and has only improved slightly over the past 16 years. But I’m a glutton for funny — even if it’s sometimes an inappropriate kind of funny — and he still makes me laugh.

Plus, I still have faith that he’s a cad truly worthy of redemption.

Zak and I met at a wedding, and along with the white lace and promises, there was a whole lot of vodka consumed. Like all romantic heroines, I woke up the next morning still wearing my perfect makeup … and immediately hashed over my hangover with my best friend, Jacqueline. I was sure that this thing with Zak would just be a fling.

My sister still thinks it is.

Like many a chick flick chick, I felt incomplete because I had not yet achieved my destiny. I had just broken up with my college boyfriend and hadn’t yet figured out what I wanted to do with my career. I was, in the words of the trailer, “at a crossroads in my life when our paths crossed.”

Step Six: Toss in Impediments to the Romance

This is the tricky part in contemporary romances. Those huge impediments that used to keep people apart — arranged marriages, class issues, religious wars — don’t really exist for the most part, so there have to be some other challenges. Zak and I had geography to battle. He lived in LA and I lived in Santa Barbara. I’d like to see Romeo and Juliet overcome that.

We tangoed, we waltzed, we shook our cabooses and we did the Watoosee. While most guys merely tolerate dancing to appease the women in their lives (kind of like going to chick flicks), Zak actually likes to dance and does a good, albeit silly, job of it.

Plus, a lot of our friends were getting married that summer, so we had many opportunities to drink too much and then partake in what Kim calls, “a cinematic illustration that the heroine and hero are destined for each other.”

Step Eight: Pack in as Many Memorable Moments as Possible

Stolen flowers from my landlady’s yard, Pustafix Bubble O’s and poetry for my birthday, battling Friday night LA traffic to come see me, and Monday morning sleepiness to get back to work — these are the things that true romance is made of.

“Chick flicks serve up on a beautifully garnished platter another thing we desperately wish real men would do as willingly as their fictional counterparts: say ‘I love you,’ said Kim. Of course movie heroes have the benefit of screenwriters to help them out, but my husband actually is a screenwriter, so you’d think he’d have come up with something incredibly memorable.

Zak’s three magic words, which were long overdue by the time he got around to them, turned into about 13, with all of the “um, um, um’s, uh, uh and urghs.

It’s the thought that counts, right?

In movies it’s usually the wedding scene that symbolizes that the courtship story line has concluded satisfactorily, but those of us who’ve been married for a while know that tying the knot is just the beginning.

True love is really all about letting your wife pick the movie.