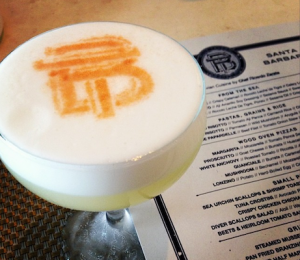 A spirited toast to all things alcoholic! by Leslie Dinaberg |

Winemaker Doug Margerum‘s first release from his new brand, BARDEN came out earlier this month. Margerum says, “The BARDEN collaboration is the pairing of my dream to make the ultimate expression of Santa Barbara County grapes and winemaker Jason Barrette’s acute craftsmanship and skill. BARDEN showcases a fusion between Jason’s southern hemisphere and worldwide winemaking experience, our access to the top vineyards and the philosophy and knowledge we both share in what makes a wine world-class. The BARDEN trade name is my middle name and its English meaning is ‘Lives near the boar’s den’ … thusly we have adorned the label with an image of the wild boar that is pervasive in the vineyards of Santa Barbara County.” The wine, which retails for $87,  received 92-93 points from Tanzer and can be ordered by emailing tastingroom@margerumwines.com. |

Acclaimed mixologist Deysi Alvarez at the hot new restaurant Blue Tavern (119 State St., 805/845-0989) utilizes a unique blend of cultures as inspiration for her cocktail menu, which features classic drinks made with housemade tinctures and small-batch spirits. The Margarita features Espolon tequila, house orange reduction, fresh lime Juice, agave nectar, and Gusano salt; the Mojito de Martinique showcases Clement Rhum VSOP and clement cane syrup; and the Old Fashioned takes a trip to South America with the replacement of bourbon with mezcal. Blue Tavern’s wine list  focuses on local vintners, many of whom have tasting rooms in the Funk Zone, just blocks from the restaurant.|

As part of the Santa Barbara International Film Festival celebration, from January 30 – February 9, Film Feast 2014 will take you and your taste buds on a culinary journey of cuisine and libations, made famous in Santa Barbara. Local talents and ingredients have come together to produce award-worthy tasting flights. Nominees include “The Graduate Wine Flight” at Au Bon Climat Wine Tasting Room and The Jim Clendenen Wine Library (813 Anacapa St.) which includes eight wines comprised of four sets – one older and one younger vintage of the same wine.