Bacon enthusiasts will be in hog heaven with monthly offerings from High on the Hog Catering (highonthehogcatering.com). Santa Ynez Valley natives and married chefs Brett and Amber Stephen cure and smoke one or two special flavors for in-the-know aficionados.

“Our original flavor was Red Eye, which was a coffee cure,” explains Brett, who learned to make bacon while working at Kevin Costner’s Epiphany restaurant in Santa Barbara in the early 2000s, and mastered his method while working for Jeff Olsson at Industrial Eats and New West Catering in Buellton.

Monthly purchases are optional, but with intriguing flavors like Pumpkin Spice (which Brett says started as a joke but “really was an awesome bacon”), Bourbon-Cocoa-cured, and Jamaican Bacon, who can resist? 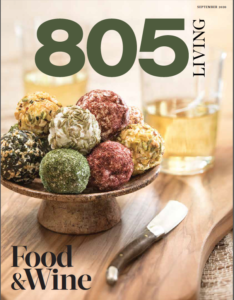