“There have been many conversations recently about the changing face of downtown Santa Barbara and how best to support its vitality, while making it more vibrant, livable, and welcoming. This year’s tour is designed to expand these discussions by exploring downtown housing, business and entertainment through its architecture. Some of the sites on the tour will have interactive stations for discovering the concepts that came from last year’s AIASB “Make State Street Work” collaborative charrette. You are invited to contribute your thoughts, experiences, and discussions while exploring the heart of downtown and its architecture,” say the organizers.

The Alhecama Theatre was built after the 1925 earthquake that left downtown Santa Barbara irreparably damaged. Following the disaster, a large-scale construction effort completely altered the character of the city center. Originally known as the Pueblo Theatre, the building was constructed in 1925 for the Santa Barbara School of the Arts. It has been in continuous use ever since. A recent remodeling project was completed in 2017 and includes a new roof, an accessible ramp and pathway, doors that open to the plaza, and completely restored interiors with original oak floors, a fully restored stage, new lighting, and drapes on custom historically accurate rods. A professionally restored mural by the noted California artist Ross Dickinson dominates the main wall of the audience space. Today, the Theatre is an inviting space, and a strong step towards revitalizing the historic plaza and bringing art into the community. 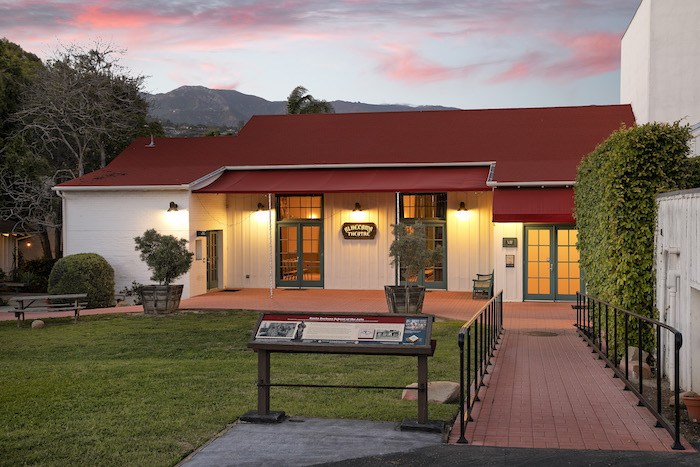 Anacapa Studios is a three-building mixed-use complex in Downtown Santa Barbara. Envisioned as a “creative compound” for living and working, Robin Donaldson AIA, Partner of ShubinDonaldson (SD) Architects developed the live-work campus for his Santa Barbara design office, while enabling him to live on campus and truly integrate his personal life with his life-long passion for Architecture. Anacapa Studios stitches into the historically commercial and manufacturing neighborhood by minimizing the mass of the project, breaking the 12,000 SF development into three separate buildings which are three stories tall with fourth story roof decks. The ultimate goal of Anacapa Studios is to be a demonstration project and catalyst for future Santa Barbara downtown living. 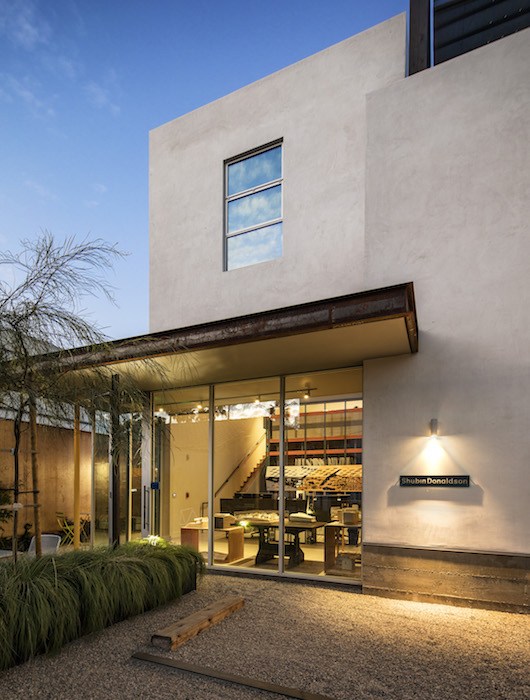 Arlington Village is the first new rental project to emerge downtown in decades helping to fulfill one of the City’s goals of new rental housing. Originally the old Arlington Hotel, the site is directly adjacent to the historic Arlington Theater. The project design compliments the historic architecture of the theater, extending its surrounding Spanish-style village to the west. The new apartment building is three stories with 33 rental units, averaging 865 SF. The project features an exercise room, a parking garage, improved surface parking for theater patrons, and 984 SF of commercial offices on the ground floor. Central components are common courtyards and a public paseo. A “village green” is provided between the theater and the development. In addition, common and private courtyards are provided on the second, third, and rooftop levels. The 1,830 SF rooftop lounge has panoramic views of the Santa Barbara Mountains. 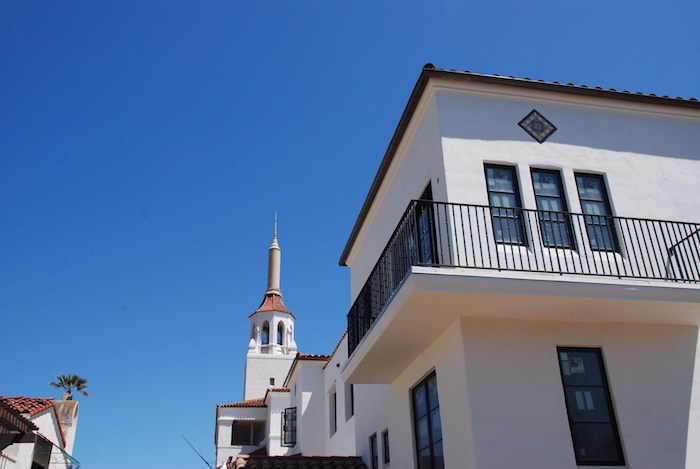 Cota + Salsipuedes is a 19,293 square feet three-story mixed on the edge of the funk zone. The project utilizes the Average Unit-Site Density Incentive Program and boasts 29 apartment units of an average unit size of 595 square feet on a lot just under a half acre within the Priority Housing Overlay. Many of the units have mountain or downtown views and range from the basic studio units to ampler two bedroom units. The design contrasts the traditional Spanish Revival architecture drawing from the more contemporary aesthetic of the funk zone. Through the use of strong striking lines wrapping the facade and the use of industrial materials and bold colors this building stands apart and creates its own identity.

This project has several comfortable units arranged around a small 50’x64’ downtown lot. The building is tucked between two industrial buildings, a parking lot, and a narrow and busy street.

The initial arrangement of the building was driven by the need for creating parking and a desire to preserve a beautiful Pink Flame Tree. Jeff Shelton arranged the buildings around an elliptical porte- cochère arch in the middle of the building.

On the top two floors of the historic Granada Theatre Tower in the heart of the theatre district of downtown is a beautiful immaculate penthouse. The residence is a two bedroom, two full and two half baths with many more features. The resident’s office sits just off the private elevator lobby in the western corner of the tower. The master suite and an office are located along the central gallery of the home. The master suite faces out towards the expansive mountains. At the end of the gallery is the great room with views towards the southwest and southeast, and off the living room, stairs lead to the ninth floor of the tower in the mansard roof. The southern corner of the tower has a loft with a full bar connected to an exercise room. From the loft are stairs that lead to the rooftop deck of the tower. The views are spectacular with 360º flawless views of the city. 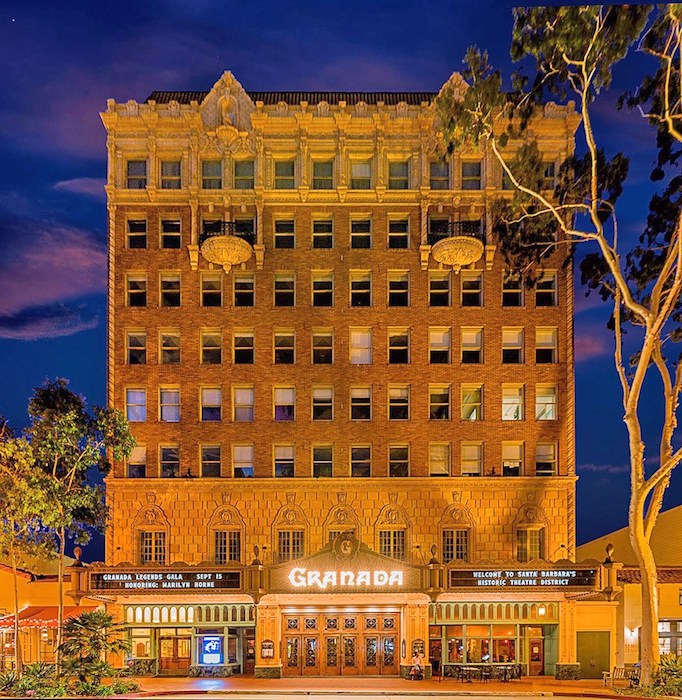 Upon entry to the foyer, all members are greeted by a bustling bar specializing in one-of-a-kind wine varietals and gourmet vegetarian fare. An atmosphere intended to escalate conversation, interaction, and new introductions. The space also includes an outdoor area where members are able to meet, eat lunch, or work independently during all seasons. Located on State Street, in the core of downtown, the Impact Hub is an epicenter for ingenuity, innovation and passion, qualities that underscore our community’s pervasively entrepreneurial spirit. 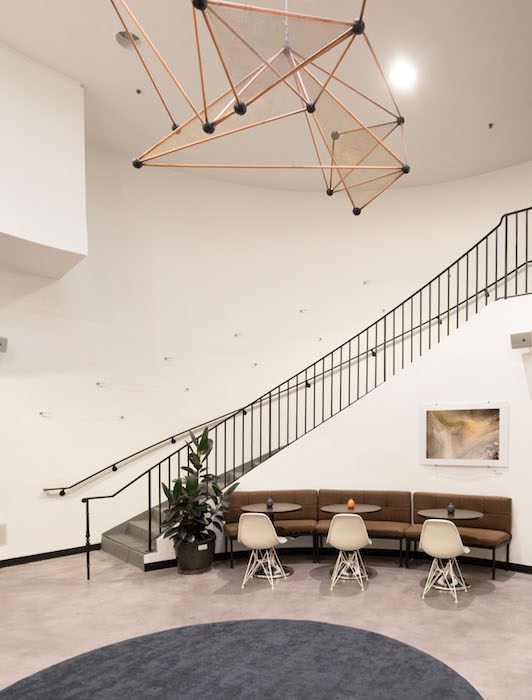 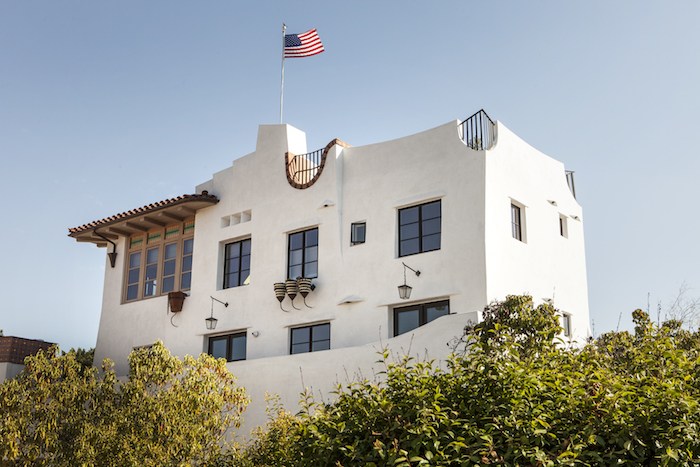 Jardin de las Rosas provides 40 affordable one, two, and three-bedroom rentals units. In addition, it houses the Michael Towbes Community Center and the Jeanette Duncan Learning Center, which provide educational programs for children, workforce preparedness for adults. The architecture reflects classic Santa Barbara style complimented by drought-tolerant landscaping and an interior courtyard with a playground and a beautiful 35-foot mural by local artists. Jardin de las Rosas is one of the first projects approved through the priority housing overlay pilot program and a key implementation action of the City’s General Plan. Jardin de las Rosas allows dozens of Santa Barbara families to live close to downtown while adding energy to the Haley corridor. 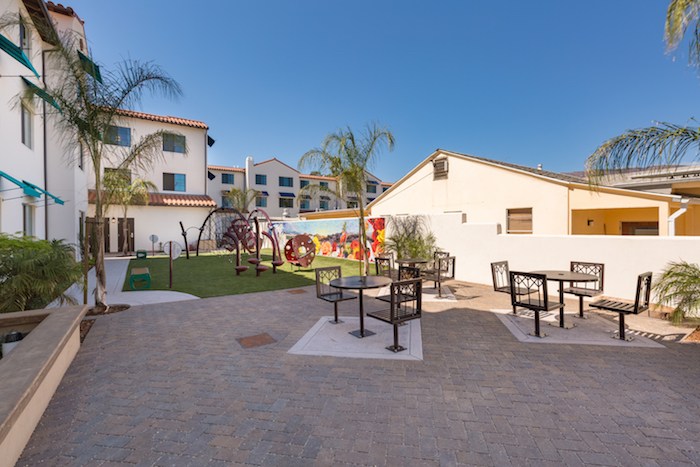 Built at the turn of the Century, this 762 square foot cottage has been designated as a Structures of Merit in the historic Brinkerhoff district. Having been severely neglected for years, the Architect and current owners embraced the Historic quality of this one bedroom home to its historic originations. At the interior, Lori A. Kari created a great room experience through the removal of walls, exposure of the vaulted ceiling, and the addition of operable skylights. While there is limited outdoor space, two outdoor living areas were created for enjoyment at different times of the day. A modest cottage, the project provides an aesthetic and functional architecture for life downtown.

In response to the current retail environment, The Service Department is being transformed into an open concept, multi-tenant property, anchored by a brewery taproom, two restaurants, a separate craft cocktail bar and two micro-retail spaces. Designed by Kevin Moore Architect and developed by Miramar Group, the same team behind the popular Waterline property in the Funk Zone, the Service Department’s layout allows for multiple defined yet contiguous spaces, each opening into the others to encourage patrons to flow easily throughout. Featuring a transformed State Street frontage with a covered patio bar and common entrance, an emphasis on indoor/outdoor spaces, an expansive outdoor beer garden at the rear of the property and charming original architectural features, the Service Department i will be a welcoming new destination property on State Street.

For downtown Santa Barbara to be truly revitalized, Miramar Group believes that projects like the Service Department be envisioned and executed, projects that utilize innovative development and design strategies to attract quality, local-friendly vendors so that State Street can be reborn as Santa Barbara’s showpiece. 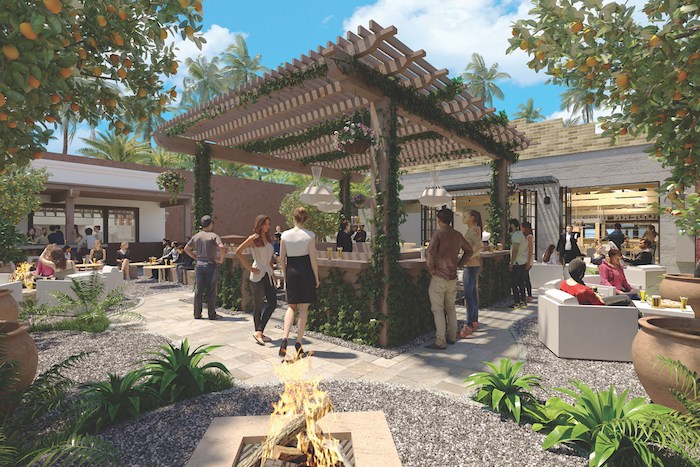 This underutilized half-acre site, located just a half block from Paseo Nuevo in Santa Barbara’s downtown, was a large parking lot with a small commercial building and a very old Norfolk Island pine. The owners wanted to expand the commercial space and build new courtyard housing behind, while preserving as much parking as possible. From the street it is comfortable but urban; providing 14 new homes in the downtown, from a mountain-view penthouse to three affordable units. 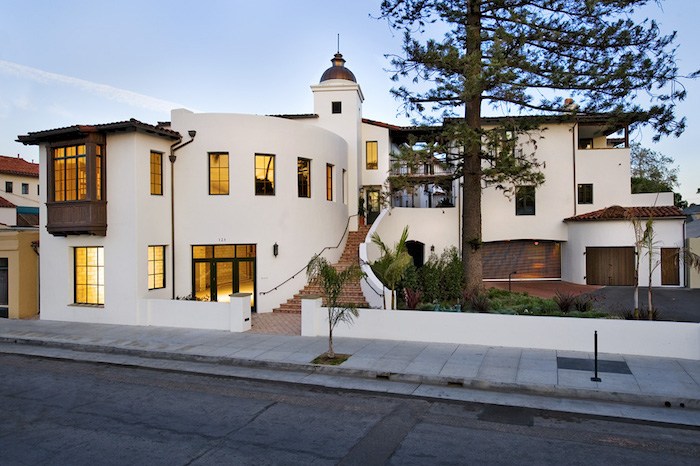