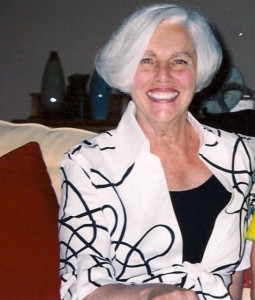 Since moving to Santa Barbara in 1957 to attend UCSB, Sue Adams has made her mark on our town in a myriad of different ways. Whether fighting for the rights of the homeless, advocating for the preservation of historic landmarks or working to get discounted healthcare for the poor, Adams pours her passion and remarkable energy into everything she does.

Leslie Dinaberg: Your husband Sam had a 34-year career as a track and field coach at UCSB. What was that like?

Sue Adams: He was gone weekends and didn’t get home till seven at night because of the team’s efforts, endeavors, training, so I pretty much had control of the household. … Our daughter Wendy was born with a lot of physical anomalies. What people would call a handicap, for her they were just challenges and she had probably about nine serious things wrong, including cleft lip and palate, kidneys that wouldn’t work, a heart that was defective, a huge series of things that we had to be in the hospital a lot to reconstruct.

And so Wendy was in fact the bionic woman, she was just an amazing individual …our second child was born about 15 months later, and his name is John and he and Wendy were best friends. And continued to take care of each other all of their young adult lives until Wendy passed away when she was 34.

LD: Wow. And now you’re a caregiver for your husband, who has Alzheimer’s. How do you manage to still do so much volunteer work?

SA: I think that it’s really important that I continue to say yes because I think I will then have something left.

…I like my balance as far as community giving, being a preservationist, being concerned about the beauty of this community and preserving it, the growth and how it grows and also the social causes. Trying to keep this community balanced, from being grasping and greedy to giving back as much as people can give. I think this is the reason why this community has thrived.

LD: Now you’re involved with the Courthouse Legacy Foundation and Save the Missions, what else?

SA: In the preservation world, I’m always a member of Citizens Planning Association…I’m also a member of the Historic Landmarks Advisory Commission for the County (HLAC). I’ve been in that for years, struggling to keep landmarks from being demolished. …. So that part is one hat and the other hat is the social justice hat and that is what are we doing about our homeless. … I think we need to be a little bit more brotherly and sisterly towards those that are compromised. … I’m the Board of Casa Esperanza and truly believe in funding those institutions that are getting people back on their feet. To know that within the last month 64 people were taken out of homelessness and put into housing makes my day.

SA: That is great. … Giving credit where credit is due is what my real theme is. It’s not me, it’s never me, it’s knowing the people who know how to get the job done. That’s who I am, is I know who to call. I know who to call, and that’s basically what this community is all about, it’s volunteerism. People who actually roll up their sleeves and do their work. … Along with that is the St. Cecilia Society, which is one of my fondest passions, and that is one of the oldest charities in Santa Barbara.

SA: Providing payment for healthcare. Saint Cecilia was the patron saint of music … the women who founded the St. Cecilia Society had marvelous musical talent. … They all came to Santa Barbara as a result of the forming of Cottage Hospital and the Sansum Clinic … (they were the wives of the doctors) and they all loved music and they got together and would jam. … So they decided to have fundraisers. … And then they provided money for a bed at Cottage Hospital for the poor. That was how they began…and that tradition continues.

LD: That’s such a nice history.

SA: It’s wonderful. To be a part of that is absolutely wonderful. The humanitarianism of that is that when you make a phone call to a provider …and say, “I understand that you have a bill in collections that is $7,000. I would like to negotiate with you and pay the balance on that account. Would you consider a discount of 40%?” And they are saying are you out of your mind? … And about two days later they call me back and say you’ve got it for 50% off.

SA: Isn’t that wonderful? Now it doesn’t happen all the, but it does happen with a lot of other people in the medical community. …We leverage our money a great deal by telling people how wonderful they can be.

LD: That’s great. And are volunteers making those kinds of phone calls?

SA: I make that call, but the board is the one who decides, they determine how many people we can help a month.

LD: Are you able to do that part of your volunteer work from home when you’re here with Sam? I would imagine you do have a fair number of meetings out of the house.

SA: Well at board meetings, Sam has become a fixture. … I do a lot of work for them and if those people cannot handle Sam in the room then there’s something wrong. They need to be aware of the fact that people are compromised and they are part of your community just as much as everybody else is.

LD: How active is he able to be?

SA: Every day I insist that we take a walk. …. It’s very important to keep him moving and … he needs to be dressed and bathed and his food prepared. He wouldn’t be able to get in and out of bed without support, so I’m very needed.

LD: I’m sure he wouldn’t have wanted you to be devoting yourself 100%.

SA: …Sam grew up with that ethic that nothing was as important as taking care of the house and his needs. He was an anachronism. … When I started my business back in 1978 (the Footnote shoe store) the dynamics of our family went crashing because Sam was furious that I was competing, that I had another life.

… One of the reasons why I needed to go to work was because we had tremendous medical bills with Wendy. She was in the hospital with probably 50 different surgeries.

LD: How long did you have the store?

SA: The Goleta store was 15 years and then we ended up in the Santa Barbara store and so that was really 19 years.

It was wonderful. I loved it. It was so great. I just really enjoyed it. People never forget it too.

LD: So did you sell the Footnote or close it?

SA: They say after the loss of a child, that you should stay in business or do what you’re doing for at least a year. … I stayed in business for a year, but Wendy, in the last month before her death she said, “Mom, retail is wonderful but it’s starting to tell on you. Get into something else. Do something else. Find another thing to do. You are loving being a part of something bigger.” That time I was part of the Coalition to Provide Support and Shelter to Santa Barbara’s Homeless, that was the precursor to Casa Esperanza, and so she said, “You really do well with that, mom.”

LD: That’s interesting that your daughter sort of nudged you in that direction.

SA: Yes, she definitely nudged me in that direction. I think you can count money for just so long and think that most often you’re not affected by the bottom line financial aspects of life and I’m a dreamer, I am who I am because I am a woman of dreams and to be grounded by money is not necessarily a good place for me. It is for many because they can handle it better than I, but I didn’t want to be focused only on money. It’s not good for my soul.

LD: Other than your book clubs, is there anything that you do that is really just for you?

SA: Gardening. Natural beauty reduces me to tears and if I can help promote it in my own backyard it’s an environment that gives me great pleasure

LD: If you could pick three adjectives to describe yourself, what would they be?

LD: It’s interesting to me that you describe yourself as shy but you’re pounding down the doors of insurance companies for other people.

SA: You can be courageous for others. But I still have to catch my breath right before I start talking.

Little-Known Fact: “In my next life, I would love to be a great dancer. I haven’t been given that this lifetime and I guess what I’m doing is dancing the best I can in another way.”

Originally published in Noozhawk on June 2, 2008. Click here to read the article on that site.