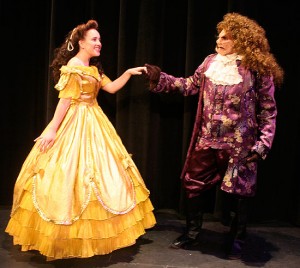 The long wait is finally over. When Dos Pueblos High School opened in 1966, a lack of funds prevented the construction of a theater, and for more than 40 years students made due with a 135-seat converted classroom for their productions.

Now those original Dos Pueblos students can finally take their grandchildren to see the school’s first production in its new $14 million Performing Arts Center. Dos Pueblos Charger Theater will present “Beauty and the Beast” on May 22, 23 and 24 at 7 pm, with an additional matinee on May 24 at 2:00 pm.

“The purpose of this show is basically community outreach and to get people aware of the department and the new theatre,” says Theater Director Clark Sayre.

The crew has been hard at work behind the scenes getting the production ready for it’s Thursday night debut in the new 749 seat theater, which was funded by the Measure V bond and includes state-of-the-art sound and lighting equipment, an orchestra pit, two side stages, dressing rooms, a construction room and prop room, as well as drama and choral classrooms.

While the students are thrilled to be in the new performance space, the adjustment is not without its challenges.

“Coming into this we had a lot of people with absolutely no experience whatsoever, so simple construction techniques that even someone who’s done one show before would know had to be taught,” explains Gabe Rives-Corbett, one of two student technical directors, along with Tim Jenkins. Typically productions work with modular, pre-made set pieces that just need to be painted for each new show. “We had to build everything. Even the workbenches are new,” says Rives-Corbett.

“The first time we set foot in here was the end of November and it was still heavily under construction. They were still screwing the stage down when I first walked in,” says Rives-Corbett.

“It always happens somehow. Sometimes no one is really sure how,” says Rives-Corbett.

” Theatre magic,” explains Zarate, whose father stops by with her computer so she can make some last minute changes to the program. She also designed the yellow posters seen around town.

These students and many of the more than100-members of the cast and crew have been working around the clock to bring “Beauty and the Beast” to life. It’s a complicated show with 133 different costumes to create, an effort led by costume designer Miller James, who is the costume designer for Opera Santa Barbara. “I just treat them like any other costume crew. I don’t consider them students … I expect them to work just like a regular costume house,” he says.

Putting on a production like this is a huge organizational effort, explains Sayre. “I always tell people that being a theater director in high school is like running a theater company, basically. You do everything that the theater company does but you do a lot of it yourself, so I’m bookkeeping and writing grants it’s just crazy.”

Other professionals involved with the production include choreographer Carrie Diamond, who is the Artistic Director of Ballet Santa Barbara and a former teacher at Alvin Ailey American Dance Theater in New York City; set designer Daniel Girard and musical director Sarah Phillips, who both work with Stage Left Productions; and Sayre, who directs Rubicon Theatre’s Young Playwrights’ Festival, in addition to teaching theater full-time at Dos Pueblos.

Through a strange twist of fate, the Dos Pueblos production of “Beauty and the Beast” comes just a week after a Santa Barbara High production of the same show. Sayre explains that he has been working on doing the high school premiere of another Disney musical, “Aladdin,” but it was delayed, so he wanted another really big show to open the new theater.

“I wanted something that hadn’t been done. And then the ironic thing is that Otto Layman, the director at Santa Barbara High also chose it. … The reason that happened was nobody’s fault at all. He had heard that I was doing ‘Aladdin’ and I heard that he was doing ‘Hair’ which he is in the summertime. We didn’t talk directly and then we both just chose this and then by the time we both chose this it was way too late for either of us to go back, because we started this way back in December or November in terms of the planning,” Sayre says.

“You know what’s great is our kids all showed up on their opening night and I think are very supportive and they’re noting differences, just stylistic differences, which is great to take one script and realize there’s lots of different ways you can go with this. And then their kids are coming to our opening. So it’s really I think it’s a school building thing rather than anything else. It’s turned really positive,” Sayre says.

Tickets are $12 for adults and $10 for students and seniors and can be purchased online at www.dphs.org. Tickets are also available at the school’s business office from 8 am to 4 pm Monday — Friday. For more information, please call 968-2541 ext. 228.