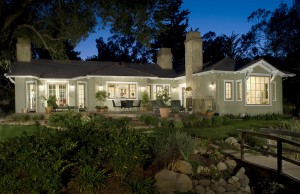 Combining cozy quaintness with modern conveniences was the goal when Linda and Jerry Gutterman decided to remodel their 1930’s cottage. As much as they loved the homey feel of their tiny, 1,086 square foot abode, they wanted more room, and used their remodel as an opportunity to create a greener, healthier and more energy efficient living space.

It was important to Linda that they maintain the cottage’s cozy feeling. “I wanted a real cottage feel when you came up the driveway, “ she says.

Located on a cul de sac off of Schoolhouse Road, the cottage has a long and storied history that Linda and Jerry wanted to make sure they preserved. The property, which runs alongside a creek, originally belonged to the family of Burr and Beverly Barker, Linda’s former husband and his sister. 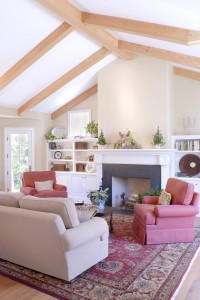 Their grandfather, William Barker, purchased the five-acre property in 1895 and it became known as Barker Ranch. William had eight children, six sons and two daughters, who lived in the original farmhouse down the street.

“As they grew up he decided to give his children property on the farm so they could build their homes with their spouses when they married,” says Linda. So the property was divided up and Burr’s father Fred built the original cottage with his brothers in 1932.

When Fred and his wife Jeanne passed away in the late 1970s, Burr (then married to Linda) and his sister Beverly inherited the cottage. They bought Beverly’s share and held onto the property.  In 1994 the property was deeded to Linda and she moved into the family cottage.

Four generations of Barker children have played among the oak trees that frame the backyard of the cottage, which butts against the grounds of the 11-acre Casa del Herrero estate. Designed by the area’s premiere architect, George Washington Smith, Casa del Herrero is noted as one of the finest examples of Spanish Colonial Revival architecture, listed in the National Register of Historic Places, and has been in the hands of its original owners, the Steedman family, since it was first constructed more than 75 years ago.

“What we wanted to achieve with this house remodel is to make it feel like it’s always been here,” Linda says, citing her love and appreciation for the older home styles found in Montecito and the Upper East Side of Santa Barbara.

Both of the Gutterman’s like traditional style homes that feel like they have a history. They have a special affection for the cottage, where Linda took residence in 1994. She married Jerry in 1999. “I married her for her cottage,” he jokes.

“I loved the cottage and I enjoyed living in it very much. It was very cozy because I had added all my touches. But the house was single wall construction, and it was cold. The windows were single glass paned…the nice leaded glass windowpanes that came from the old Parma Estate, and neat windows, classic leaded glass windows … but it was just drafty,” says Linda.

“We were burning gas like mad just keeping the house warm,” says Linda.

In addition, the house wasn’t well built. “It wasn’t a home that you could save and remodel. It wasn’t built well enough structurally, because it was built by the kids, by the boys,” she says. Plus, it is located right next to a creek and they had problems with mold and mildew.

“It was almost like it was becoming uninhabitable for health reasons, and so we decided we would build a whole new home. (There was) almost like an underwater lake that was developing under the foundation of the house when you dig down underneath the property,” says Linda.

Jerry explains that the Jell-O-like substance under the house was subsurface water, which had to be excavated in order to rebuild the structure. “We did not want to build over that because we would continue to sustain the same problems,” he says. 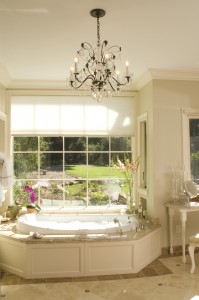 Working with Allen Associates, a local building contractor that specializes in green construction, the Gutterman’s decided to install a French drain system that collects all of the water runoff from the back of property and the roof and then drains it into the streambed for reuse.

While the Gutterman’s decided to remodel in January 2006, they didn’t actually begin demolition until April of that year. They worked with several architects to come up with a design that would preserve the look and feel of the old cottage while using new materials and technological innovations to go from a 1,086 square foot home to 2,900 square feet. Linda’s father, architect John Roberts, did the initial layout and floor plan.

But because we changed our minds so much, “her father fired us,” laughs Jerry. “Her dad does drafting the old-fashioned way with a pencil and eraser, and with the way Linda and I change our minds, until we figure it out, it was a lot of erasing for him.”

“We became known as Mr. and Mrs. Change,” says Linda. The next architect hired was Melvin Hemmer, who unfortunately passed away before the project was completed. Sophie Calvin took over at that point to complete the plans and get the design through all of the necessary approvals.

While the new home is more than twice the size of the original, from the curb it still looks like a small cottage. “We tried to keep the feel of this home from the front when you drive up to be similar to other homes on the street, to keep that same cottage sense and feeling,” says Jerry.

“When you drive up, it doesn’t look nearly as big as it is,” says Linda. “I kind of like the element of surprise. That is really what I enjoy is coming in to a home and seeing the charming little touches.”

Among the charming touches she preserved are the fireplace mantel from the original cottage, which now graces the master bedroom, and the door of the original 1900s farmhouse from Barker Ranch, which is now the entry to a new garden cottage in the backyard.

“That was important to us to try to keep the traditional integrity as best we could,” says Jerry.

There’s always a concern in older neighborhoods when people hear that there’s a new home going up, says Linda. While she understands the need to update older homes, “what I want is for this street to stay charming as it always has been. ”

Some of the biggest updates were in the area of energy efficiency. Improving insulation is one of the easiest and most cost effective ways to improve the energy efficiency of a house, says Allen Associates Green Resources Manager Karen Feeney. In the Gutterman’s case, they used recycled content non-formaldehyde fiberglass insulation in all of the walls.  They also used energy-efficient windows and ceiling fans to improve circulation. An “on-demand” hot water heating system also improved efficiency, as did new Energy Star appliances.

The Gutterman’s selected innovative structural materials for their remodel as well. They used faux stonework for the outside fireplace, which is less expensive and easier to work with because it’s much lighter than real stone. Their backyard deck is a product called EverGrain, made from plastic and recycled wood fibers. This type of decking is extremely low maintenance and not prone to damage from termites or weather.

Linda says she marvels at the many high substitute materials available now instead of wood.

Fire is also a big concern in Montecito, and the Gutterman’s took this into consideration when choosing the EverGrain decking, which is Class A fire-rated, meaning it has a high resistance to fire and a lower probability of combusting during a fire. They also chose to use fiber cement shingle siding manufactured by CertainTeed and a fiber cement roof product called Firefree to address both their environmental and fire safety concerns.

“They were able to achieve both goals, the green goal as well as putting in materials in their home that were not going to be susceptible to fire, so there’s a win win in both areas,” says Feeney.

Their Isokern fireplaces in the living room, the kitchen, and outside on the deck were all designed for energy efficiency. “A lot of times you’ve got your fireplace and three-fourths of the heat is going up. The way that these are designed is that they are much more fuel-efficient and they radiate the heat back out into the rooms so they are more effective,” says Feeney.

In order to improve the air quality and therefore their health, the Gutterman’s—who had custom dining room and office cabinets built by John Willis and purchased their kitchen and bathroom cabinets from Jack’s Kitchens— used formaldehyde-free shelving and cabinet materials, as well as non-toxic sealants, adhesives and oils and zero/no VOC (no emission) paints and coatings throughout the house.

They also installed PEX plumbing, which is made from cross-linked polyethylene. In addition to the cost saving advantage over traditional copper plumbing, this material is more flexible so it doesn’t require welding, it’s more durable under temperature extremes, and there are no chemical byproducts to get into the water supply. “It’s definitely a cost effective green alternative,” says Feeney.

The Gutterman’s were thrilled to be able to move back into their cozy cottage last April, exactly one year and one week after demolition day. They had a hard time picking a favorite room. Jerry says he had a special affection for his office, the bedroom and the living room, while Linda says she loved both the kitchen and the master bathroom, in part because of their beautiful, park-like views, and of course the memories.

“There’s so much memory here of all our family get-togethers under these trees and of all our picnics and all that, so it’s really a very nostalgic thing for us,” says Linda, whose daughters Bryn and Leah now visit often with their own babies.

The structure may be new, but the rumble of the creek, the swish of the trees, and the history of the house still remain.