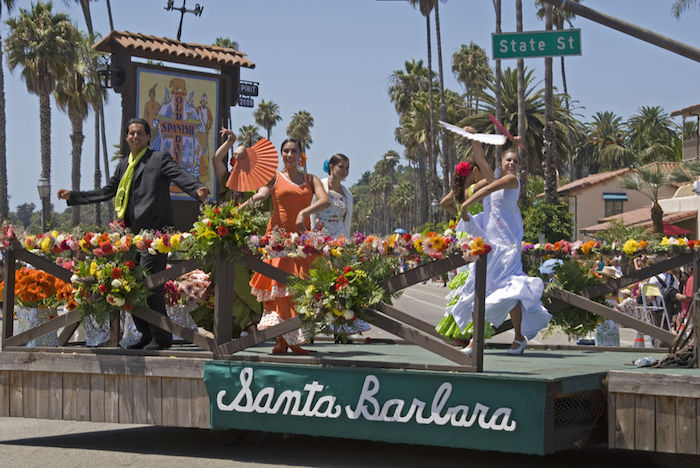 Along a route of less than three miles, El Desfile Histórico makes a colorful connection to Santa Barbara’s past.

El Desfile Histórico, themed as “a celebration of early Santa Barbara,” will be the fruit of hundreds of hours of volunteer labor. About 800 horses, 30 carriages and as many as 20 floats will line up for the parade this year, according Kelly Magne, vice presidente of pageantry.

Because it’s Fiesta’s 80th anniversary, the parade will be a re-creation of the 1924 event, with every float either representing a 1924 float or something that existed in Santa Barbara in that year, said float chairman Marc Martinez. There will be floats depicting the 1924 Courthouse (which was later destroyed in an earthquake), City Hall, the Arlington Hotel, El Patio Restaurant (the precursor to El Paseo) and other historic buildings, events and figures.

Club of Santa Barbara’s Chumash village float was both fun and educational for the young art camp participants who researched the different elements of Chumash life, then designed and built the float from the ground up. One end of the elaborate float will feature two Chumash huts.

“We started with bamboo poles, but it didn’t work,” said Mitchell Cunningham, a Notre Dame School seventh-grader who helped build the float. “The bamboo looked good but it burst.”

Fellow art teacher Lise Lange also contributed leaves from her yard to build the authentic-looking huts. The finished project will portray a seaside village, complete with sand, waves and Chumash grinding maize and going about their daily lives.

Also featured will be the club’s flamenco dancers, said executive director Erin Cavazos. They have new costumes this year, she noted, thanks to money donated by the alumni association.

St. Barbara is also getting a new look this year, said Dolores Hartnett of Reina Del Mar Parlor No. 126, Native Daughters of the Golden West, who’s been involved with the parade for “50 years at least.”

“We just rebuilt our float from the ground up … it’s going to be great for St. Barbara (portrayed by Marisol Cabrera) to ride,” said Hartnett. While all of the floats were drawn by horses at one time, St. Barbara is the only float drawn by horses now.

A new addition to the parade is the Fiesta Queen and her court, said Martinez. In the 1924 parade they held a queen competition as a fundraiser, where the girl who raised the most money won and had the honor of being led to the float by flower boys, a tradition that will be re-created this year, he said.

The queen will be portrayed by Diana Vandervoort, with princesses Thea Vandervoort, Jazz and Paisley Moralez, Marianne Freeman, Cari Kendric and Donna Egeberg.

The coming together of the whole parade is a work of art, said Magne, especially the horses.

“We have a full team of equestrians there that are making sure all the horses are under control and prepared. … It’s been an amazingly safe parade because of the skill of our team,” she said, giving special kudos to equestrian director Wayne Powers.

Besides being one of the country’s largest equestrian parades, it is also a qualifying parade to ride a horse in the Pasadena Tournament of Roses Parade on New Year’s Day, said Magne.

“Riding a horse in a parade is no easy task,” she said. “You need a lot of training and lot of years of experience to ride in noisy crowds.”

The equestrians are definitely big supporters of Fiesta and Old Spanish Days thanks them with a party, the Horsemen’s Rendezvous, said Magne, adding, “They usually stay one or two nights. It’s great because they spend their money here. We like that.”

“This is probably the best parade we’ve had in at least 20 years,” said Martinez, whose father, Abe, was the former float master. “I used his hammer to build many of the floats this year. It feels like he’s still with me.”

As directors, we’re only the caretakers, continued Martinez.

“It’s been the people, the families, that have kept it (Fiesta) alive to make this 80th anniversary,” he said.

“The parade is the signature event that makes everything work.”