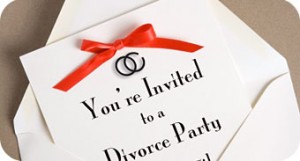 “Divorce is contagious, be careful,” warned my friend Emily, who recently split from her husband, following the no-longer-rose-petal-strewn paths of three of her bridesmaids. Where weddings–and vodka shots–once encouraged romance and marriages, divorces can also ripple through groups of friends faster than a case of head lice in a classroom of kindergarteners.

Fortunately for me, the vast majority of my friends’ marriages are still intact. Though I may be playing with fire by writing this column as my husband and I prepare to move out of the place we’ve lived for the past eight years, when this wacky invention called “The Divorce Calculator” (www.divorce360.com) showed up in my inbox, I couldn’t resist the temptation to do the math.

Not just my own math–I calculated the odds for all of my friends as well. It’s not that I’m nosy, but Emily’s words were still ringing in my head. Did I dare to find out the odds of our beating the odds? Fortified by a triple latte, I took the test.

Given that 43 percent of first marriages in the United States end within 15 years, and Zak and I will hit that 15-year mark in March, my results were actually better than I expected.

That doesn’t sound so bad, right?

So my results were average. They were on the low side of average, practically less than average. Average-ish. I was sure that if I ran my friends’ calculations they would help to bring our score down.

I scored my sister, my best friend from college and my best friend from high school. Then I tried my three best friends in town. Astonishingly, they all had the same results as I did: the chances that people with similar backgrounds will be divorced over the next five years are three percent.

Could it be that I hang out with a bunch of statistical clones? Or it is just my 97 percent happy marriage is contagious?

Three percent chance of divorce isn’t so bad, right? I can live with three percent. Those are pretty good odds. Plus, at least three percent of my friends are already divorced, a few more than once. But if that doesn’t count, then for a three percent bump in my stats I would be willing to make a few new friends and let them get divorced.

I could even throw them a party, like the divorce party I read about in Las Vegas, where each woman invited the most attractive single man she knew to come meet their girlfriend–and none of the other women were allowed to wear makeup or cute outfits, so the honoree would feel great about herself. Or if they’re not quite up for dating yet, I could throw them a party like the one in New Jersey, where they gave the marriage a eulogy, bought a wedding ring coffin, and feasted on a beautiful three-tiered divorce cake, which had the original wedding cake’s bride and groom perched on top–minus the groom’s head.

Not that I would wish a divorce–or a divorce party–on any of my friends, even my fictional new ones.

I remember rejoicing the summer that oversized wedding and wedding-related party invitations stopped clogging my mailbox.

Not that all the weddings weren’t fun–but doing the Hora and the Hokey Pokey can get old when it’s every single weekend.

Not that it wasn’t fun to drive around State Street in stretch limos and sipping cosmos from veiny, plastic, glow-in-the-dark, disembodied penis straws–but bachelorette parties can get old too.

Not that it wasn’t fun to ooh and aw over china patterns and linens at bridal showers–although, come to think about, those were never that much fun.

But I am 97 percent sure I would happily sit through hours of bridal bingo, creating wedding gown couture out of toilet paper and giggling at lists of “things the bride will say on her honeymoon” if I never have to go a divorce party–especially one where I can’t wear makeup.

When Leslie’s not obsessing about divorce statistics, she’s reading email at email. Originally published in the Santa Barbara Daily Sound on January 9, 2009.