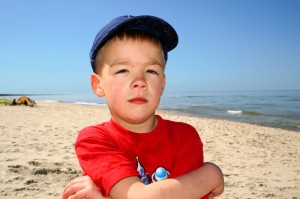 My son turns eight next week, and since it looks like I won’t be having another child to practice on, I won’t be needing a lot of these hard-earned lessons for my next kid. Therefore, I give them to you, gentle reader.

1. Forget all of those gender-neutral parenting plans you had. Once the epidural wears off, reality kicks in. Nature, schmature, nurture, schmurture. You have joined the MOB. You’re the Mother of a Boy and there’s no turning back. The fart jokes will start in about ten minutes, and eight years later you’ll still be holding your breath.

2. Your child will never appreciate those first few years you spent sleepless, showerless, and adult-conversationless. In fact, he may even laugh loudly at a picture of what you looked like back in those days. If you get a chance for some time to yourself, run, as fast as you can. Sure your one-year-old may whine a bit and your two-year-old may throw a tantrum as you leave, but your seven-year-old will never know the difference.

4. The only scientifically documented thing that actually happens at age three is kids become obsessed with their feet. Never accept food of any kind from a three-year-old.

5. Four-year-old boys can get a bit emotional when you deny them things. Here’s my favorite tip: You can say “maybe” and mean “no.” “Maybe” buys you time. “Maybe” helps you avoid tantrums in public places. “Maybe” gives your child a teensy tiny bit of hope he can hang on to for a little while, and he just might forget about what he wanted in the first place. This works with husbands as well as kids.

6. When you figure out how to explain to a five-year-old that some people get pretty offended when you take a certain someone’s name in vain, please, please, please help me explain it to my son. Meanwhile, if you know a way to avoid cussing when you spill a piping hot latte all over your new Coach purse, could you also let me know?

7. I know we haven’t had a rainy day in a long time, but when Koss was five, it rained a lot. Santa Barbara is not a rainy day friendly town–I’m surprised the bowling alley isn’t outdoors. When you coop up 48 pounds of five-year-old boy energy inside a teeny tiny house for too long, something’s got to give–your sanity. My suggestion is to hook him up to an electricity generating treadmill. Viola, no more global warming.

8. Six-year-old boys turn into lawyers–everything is a negotiation or a stall tactic, and you have no choice but to develop your own legal skills. For example, after the 13th time you tell him to brush his teeth/finish his homework/put out the recycling/tar the roof, he’ll finally look up from his whatever game he’s into that week and say, “chill, mom.” This is what’s known as stalling. Forcibly take the game from him and turn it off. Tell him he’ll get it back after he brushes his teeth/finishes his homework/puts out the recycling/tars the roof, etc. This is what’s known as a negotiation.

9. Seven-year-olds can chatter incessantly about mythical creatures and who would beat who in a fight — seriously, my kid can go at least 10 minutes without taking a breath. The trick is to nod your head and think about George Clooney. When your son finally stops talking, answer, with a straight face, “I think the second one is more powerful.” Works every time.

10. If he says he’s “gotta go,” he’s gotta go. And even if he says he doesn’t, make him pee anyway before you leave the house. If he’s two, your best friend’s new hardwood floors will thank you. If he’s seven, his baseball coach will thank you.

11. Seven-year-olds can do a lot of things for themselves, but they need very specific directions. Don’t say, “get a snack” unless you’re OK with him snacking on leftover Halloween candy. And if you let him snack on the fruity-chewy-gooey-not-worth-the- calories-candy, remember, you won’t be able to use it in his birthday piñata in July.

12. Never, under any circumstances, even if you have to push him away from the scale at Weight Watchers, let your child see how much you weigh. Show him your tax returns if you need to distract him.

13. Male Answer Syndrome kicks in early. If you want to know anything about anything, ask your seven-year-old son.

14. Keep in mind; sarcasm is a sign of wit, intelligence, and cleverness…until your kids use it.

Originally appeared in the Santa Barbara Daily Sound on May 9, 2008.